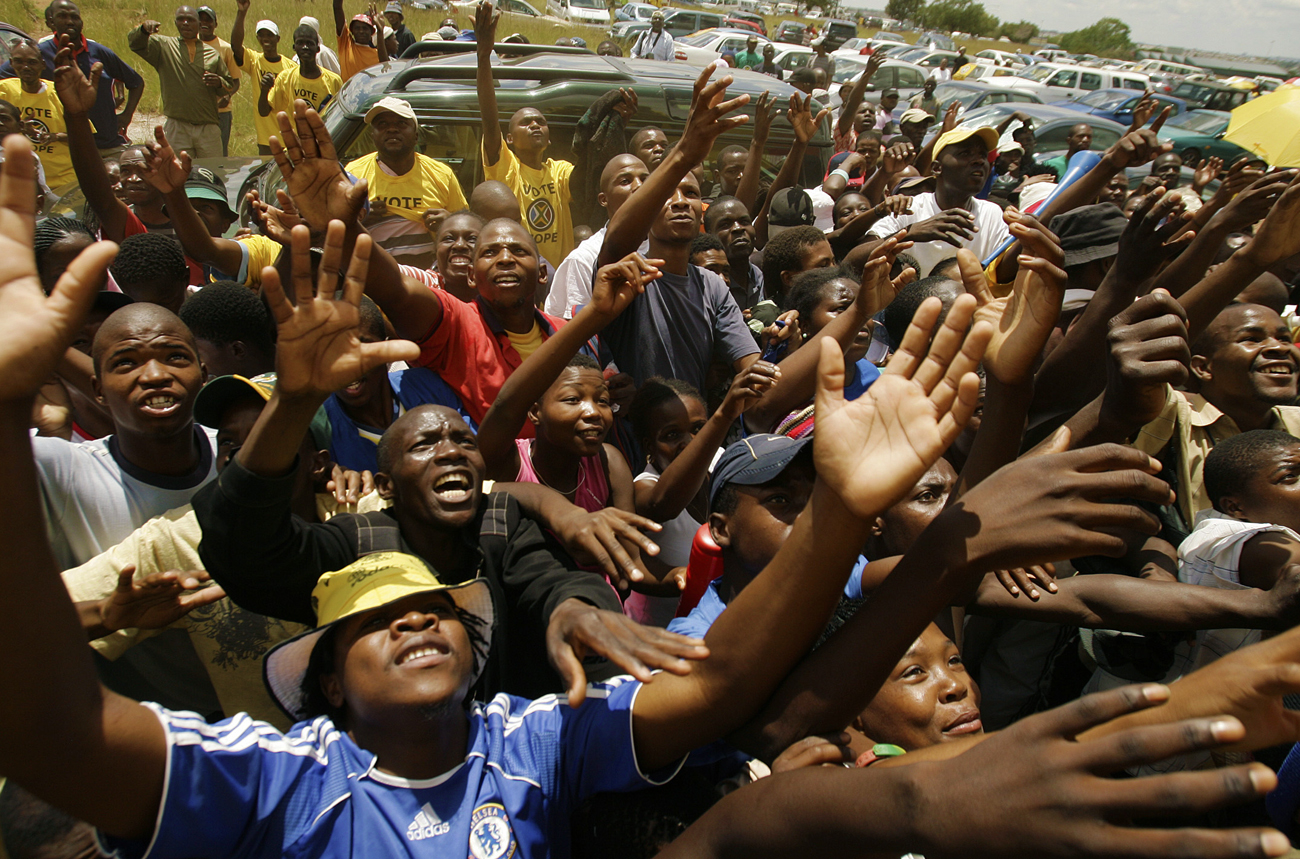 Rumours, leaks and verbal attacks are ripping the surface of a party that was quite recently considered this country's best hope of ending the ANC's grip on power. Its leadership election is getting uglier by the day, hurting not only the party itself, but also South Africa.

President Jacob Zuma, with all his troubles, could easily be forgiven if he has a quiet chuckle when he thinks of the situation in which his former comrades find themselves these days. And he wouldn’t be wrong should he start wondering if Cope (the Congress of the People) itself is catching the Malema flu?

Because the latest outburst (Ed’s note: Writer’s original word used here was at the far end of the “unprintable” spectrum.) from Cope’s Youth Movement (YM) is almost as spirited as young Julius’s missives. It accuses Cope’s current, but increasingly temporary-looking leader Mosouia Lekota of having “dictatorial views and seeding anarchy” in the party. Nothing like a little bit of bile to get you going in the pre-election mornings. But they take it further. Here we go: “We have come to fight hard the temptation to believe that the leaders who we so trusted with the task of leading in these above portfolios including that of the president  may be anointed spies and forces of darkness who report to our rivals on the promise of their dirty work not getting exposed in the open in future.”

Yes, they are all in the same party.

The Cope YM letter was signed by Anele Mda. You’ll be forgiven for not remembering her name, but in September 2009 she was suspended by the party for using racially-offensive language against Deidre Carter, then deputy general secretary of Cope. Mda’s suspension was lifted after she apologised.

Cope YM is not the first to raise the spy issue. It’s the party’s lingering sore: Basically, any hints that you are a spy for a rival are for Cope what the insult “counter-revolutionary” is to the ANC. The issue of being planted by the ANC is the one threatening to cripple the entire enterprise. That, and the ones of “dis-organisation”, lack of direction and plain old non-delivery on promises. Everyone is so paranoid that someone who doesn’t support them completely is then just out to get them.

As has happened in the ANC, Cope’s youth are taking their lead from their elders and supposed betters. This latest round started last week, when Cope’s Gauteng provincial secretary, John Ncgebetsha called a press conference and announced that Cope in Gauteng was punting Mbhazima Shilowa for leader of the party. This will be at their leadership conference currently scheduled for the end of May. All fine and dandy. Except that the party’s structures haven’t actually gone through the process. It’s a bit like proclaiming Zuma leader of the ANC without bothering with Polokwane.

And Cope being Cope, the pissed-off were quick to respond. So we had the glorious sight of a provincial leader claiming one thing, and his spokesperson claiming another. The party’s national machinery, presumably controlled by Lekota, fired an even stronger broadside, talking about how provinces couldn’t make these kinds of announcements because there was a moratorium on them holding their conferences for now. And yes, the party’s national spokesperson put it like this, “No one who has an interest in the unity of Cope would have done such a thing”. Could that be a snide hint that perhaps Ngcebetsha is an ANC mole?

This is just one example of what happens when a party tries to hold a leadership election, while its current leadership cannot control its own structures. It is a bit like the ANC in which everyone cries havoc and lets slip the dogs of war. It’s fun for a while, but then you realise how destructive it is. Cope’s secretary general Charlotte Lobe simply isn’t up to sorting out the mess. She lost the Free State ANC for Mbeki before Polokwane and hasn’t really improved her grip on things since.

We’ve said before that Shilowa is probably better able to run a party of Cope’s promise. He has the wits, the guile, the organisational ability and, crucially, independent means. But he, or his people, are suspected of playing dirty in the election process. Pulling a stunt like Ngcebetsha’s just makes them look silly. And when journalists called the next day to ask if Shilowa and company would disavow what happened, the reaction didn’t fit the leader who knows how to stand up and take punishment like a man.

However, using the Youth Movement is hugely more dangerous. Because it clearly cannot be controlled in quite the same way, things can easily get out of hand. Just ask their ANC cousins.

Having said all of that, the real problem is still this: Cope was formed to be against something. At the time it had no real idea what it was for, apart from retaking power. And it’s first real leader, elected rather than appointed, or self-appointed, is going to have a hell of a lot to do with defining what the Cope will stand for, and why it exists.

But look deep at its heart. and you’ll see Cope doesn’t really have a strong enough reason. Even the ANC’s national executive committee members, for all their differences and built-in jadedness, could probably claim with some measure of truth, that they want a better life for all (particularly themselves – Ed). But Cope is made up of grumpy Mbeki-ites, some idealistic whities, some buppies, and their main support at the polls came from the crowd who always vote for whatever party is new in that election. And while that little lot could be kept unified through the prospect of power, it is just not gonna happen. The glue that power can give a party, the sheer discipline to fight for power, just isn’t there.

At this moment, we also feel that there is no clear winner in Cope’s leadership contest. If either Lekota or Shilowa thought they were a shoo-in, no one would need to stoop so low. Which means it’s actually going to be quite a tough – and destructive – campaign.

There’s probably a strong temptation within Cope’s top structures, particularly among the Lekota supporters, to just postpone the whole thing again. But that would be even worse. Because surely already the principled Cope members are sick and tired of this. The party needs one leader who is in charge and that’s simply that.

The ANC is sometimes accused of spending too much time fighting within itself for power and position and not enough time on policy or simply running the show. You have to think that Cope, for the moment, has simply taken on some of the worst aspects of the ANC, and very few of the positive ones. And that’s a pretty damning indictment on its leaders.

Photo: Cope supporters react as they wait to be given party T-shirts before the start of an election rally in Soweto February 21, 2009. REUTERS/Siphiwe Sibeko