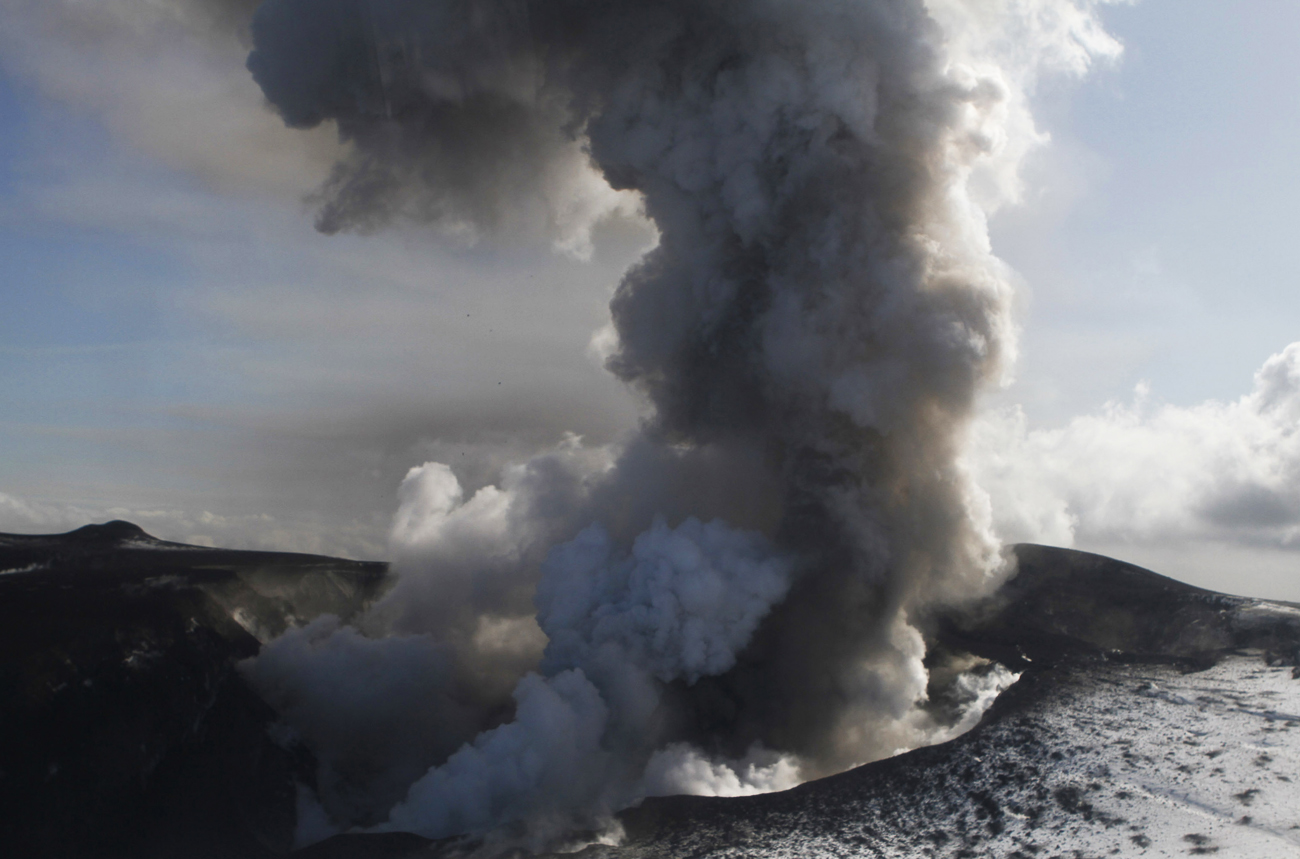 Airlines have lost more than $2 billion because of Iceland’s disruptive volcano, as hundreds of thousands of travellers try to get home after an ash cloud crippled travel through European airspace for the past week. It seems Europe’s civil aviation authorities are in a barney with airline chiefs, who say that decisions to close the skies and ground fleets were based on flawed data and unwarranted fears. One aviation group called the financial fallout worse than the three-day global shutdown after the 2001 attacks on the World Trade Centre. But few are focusing on what would have transpired if planes dropped out of the sky as engines failed from ingesting the glassy, gritty ash cloud. Europe has now opened much of its airspace, but restrictions remain over parts of Britain, Ireland, France and Scandinavia. Photo: Reuters.

Thailand’s political standoff has spread from Bangkok to the northeast of the country, with anti-government protesters blocking a train full of military equipment they said was to be used to dampen demonstrations in the capital. “Red Shirt” protesters and security forces are facing off in downtown Bangkok, where demonstrators are demanding Prime Minister Abhisit Vejjajiva dissolve parliament and call new elections. The Red Shirts support pro-poor former prime minister Thaksin Shinawatra, who was ousted in a 2006 military coup. Earlier clashes in Bangkok left 25 people dead and more than 800 wounded. Soldiers in full combat gear have been stationed in the main Bangkok business district, while several hundred pro-government demonstrators have raised tensions further by throwing rocks and bottles at the Red Shirts.

The French justice minister wants legal action to be taken against a man photographed wiping his backside with the French flag. The official response came after the photograph was displayed in a competition run by media retailer, FNAC, where it won special mention in the “politically incorrect” category. While it’s not clear if the man engaged in the actual scatological act, the pic snapped him from behind with his trousers round his ankles, apparently desecrating “drapeau tricolore”. The image appeared in a free national newspaper, but was hastily withdrawn after complaints from veterans’ groups. It’s not an offence in French law to insult the flag at a private event, but the public lavatorial display was too much for Gallic pride. Oo la la.

Georgia has enriched uranium on its mind and in its hands

Georgia has confirmed that it’s seized a small shipment of highly enriched uranium, blaming Russia for instability that enables nuclear smugglers to operate in the region. That will jolt the US, which fears that Iran wants the stuff to make a nuclear weapon – and, worse still, that the stuff could fall into non-state hands. Georgian President Mikhail Saakashvili is keeping mum over the details of the seizure, but said the uranium arrived through the Caucasus region of south-eastern Europe. The Georgians detained a group of foreign nationals and placed the uranium in a secure location. Two regions of Georgia – Abkhazia and South Ossetia – declared independence after a brief 2008 Russian-Georgian war. The Georgians claim such seizures usually come from the direction of Russia. That means this isn’t the first time that highly enriched rogue nuclear material has been found.

A radical Muslim group told the creators of television’s hit cartoon satire “South Park” that they might face violent retribution for depicting the prophet Mohammed in a bear suit. That’s likely to mean a future episode will parody the threat, although the “South Park” people will no doubt be remembering the fatwa placed on writer Salman Rushdie, and the death threats against a Danish newspaper cartoonist who depicted the prophet wearing a headdress shaped like a bomb. The website posting showed a photo of Theo van Gogh, a Dutch filmmaker shot and stabbed to death in an Amsterdam street by a fanatic angered by his film about Muslim women. The message to “South Park” said: “We have to warn Matt and Trey [the show’s creators] that what they are doing is stupid and they will probably wind up like Theo van Gogh for airing this show. This is not a threat, but a warning of the reality of what will likely happen to them.” Volatile stuff, indeed.

Read more: BBC, The Telegraph, The Brussels Journal, The Times

US computer anti-virus firm McAfee confirmed that a software update it posted caused its anti-virus program for corporate customers to misidentify a harmless Windows file as a virus. This caused computers in companies, hospitals and schools around the world to repeatedly reboot themselves. Of course, McAfee quickly posted a replacement update, but by then thousands of corporate computers had been affected, if not hundreds of thousands. Some US hospitals had to postpone elective surgeries and stop treating non-trauma patients, and police in Kentucky were told to shut down computers in their patrol cars. Just imagine what al-Qaeda could do.

Pope Benedict XVI promised pilgrims that the Roman Catholic Church would take action over the widening sex abuse scandal. During his weekly audience at the Vatican, he told pilgrims and tourists in St Peter’s Square that he met with abuse victims during a recent trip to Malta, assuring them of action. After the pope’s Malta trip, the Vatican issued a statement saying the Church would investigate the allegations and bring those responsible for the abuse to justice. The pope’s latest words were the most forceful public promise he’s made on this matter.

Forty years ago, on the first Earth Day in 1970, pollution in the US was everywhere. Rivers caught fire, beaches were covered by oil spills and smog choked many American cities. But now, formerly polluted lakes and rivers are open to swimmers and smog levels nationwide have dropped by about 25%, with lead levels in the air down more than 90%. However, these days the challenges to Mother Earth are largely invisible, as carbon dioxide levels in the air have increased by 19% globally since the first Earth Day, slightly warming the annual world temperature. But in the US there’ve been improvements in the form of the Clean Air Act, the Clean Water Act that have changed the way companies treat the environment. So, the country’s air is cleaner, despite there being twice as many vehicles on the road. One government environment official says more than new laws, greener cars are going to be the answer for tackling climate change.