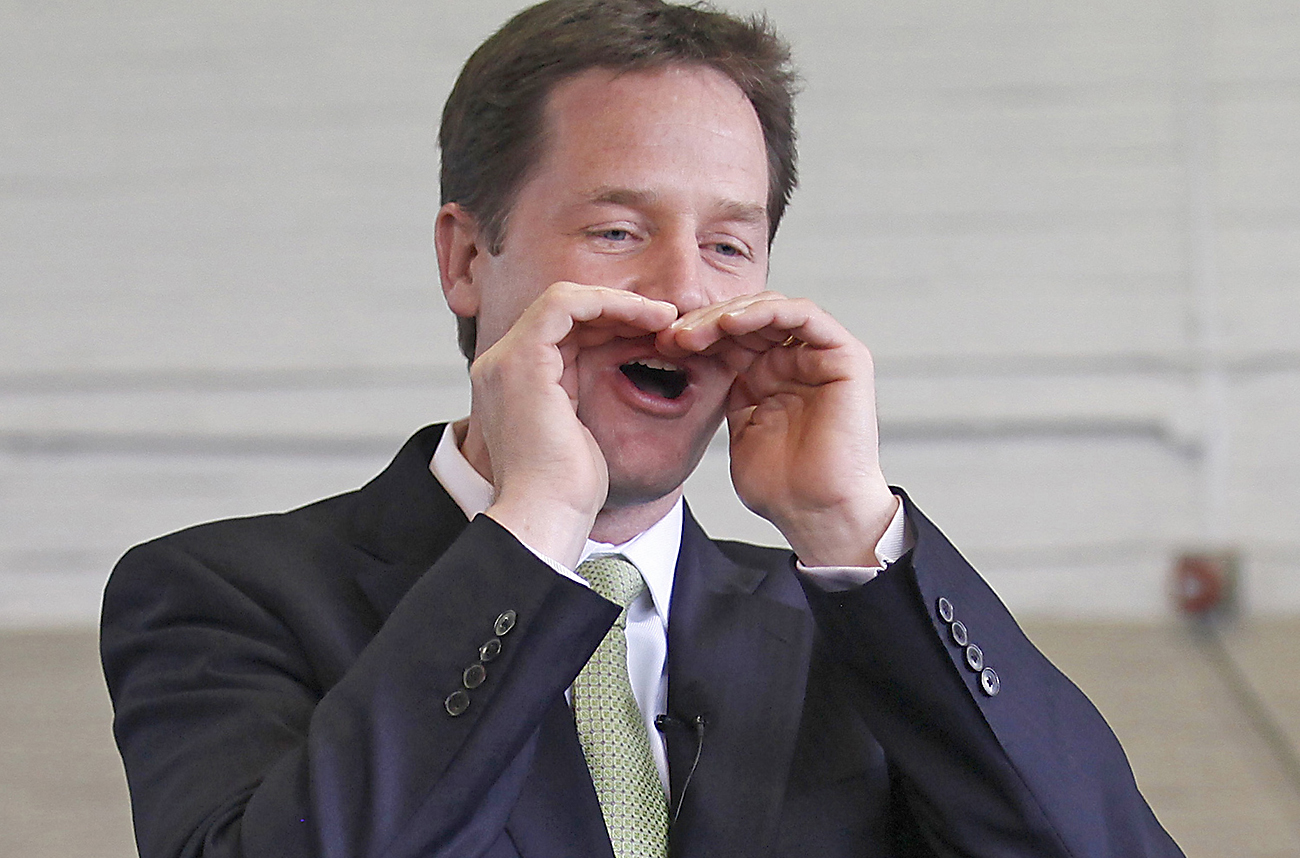 Britain’s Liberal Democrat leader Nick Clegg is playing down suggestions that he might cause the biggest upset in Britain’s recent election history, as the countdown for the country’s May polls begins in earnest. Clegg’s party has always been a rank outsider in Britain’s dualistic political environment, which pits the traditional Labour and Conservative powerhouses against each other. But there’s deep unhappiness among the public over the past performances of the big two parties, and recent polls suggest that Clegg lifted his party into close contention with Labour and the Conservatives during the country’s first nationally televised election debate. Some polls show that the Liberals and Conservatives are neck-and-neck, with Labour trailing by a few points. If Clegg manages to spoil the traditional two-horse race, the British political landscape will be changed forever.

Photo: The leader of Britain’s Liberal Democrat Party Nick Clegg speaks to students at the Wiltshire College, an agricultural college near Chippenham in western England, April 20, 2010. Britain’s Liberal Democrats turned their fire on the banking industry on Tuesday, seeking to build on a surge in support that has thrown next month’s election wide open. REUTERS/Andrew Winning

Passengers weep in relief as some European flights resume

London’s Heathrow airport, Europe’s busiest, is open for business again as air traffic returned after an ash cloud from an Icelandic volcano grounded flights for a week. And passengers wept tears of relief as planes took off from Charles de Gaulle in Paris, Schipol in Amsterdam and a plane from Canada landed at Heathrow. But authorities warned it could still take weeks to bring all stranded travellers home. UK flag carrier British Airways expects to welcome arrivals from the US, Africa and Asia, although passengers are understandably a little nervous, as the volcanic ash cloud over Europe is still dense in some places. Aviation officials have feared that the glassy and gritty plume could jam up jet engines in midflight, so the return to the skies is going to be slow.

The International Monetary Fund has proposed that global banks and other financial institutions pay two new taxes to fund future bailouts in what’s seen as a radical solution to make markets more careful in the face of future economic collapse. All such institutions would pay a flat-rate bank levy, and also face a further tax on profits and pay, after taxpayers in the US and parts of the EU had to pay hundreds of billions of dollars in rescue packages for ailing financial institutions. The public on both sides of the Atlantic is livid that bankers have again started to pay themselves record bonuses, barely a year after their laissez faire dealings precipitated global economic meltdown. The IMF has made the proposals available to G20 group nations, and the plans will be discussed by their finance ministers this weekend. Giant insurers, hedge funds and other financial institutions must also pay the taxes, despite being less implicated in the recent crisis.

GM pays back some bailout money ahead of time, but there’s still a long road to ride

General Motors has repaid $8.1 billion in loans it received from the US and Canadian governments, and will soon make investments worth $257 million in factories that will build the next generation of the midsize Chevrolet Malibu. US taxpayers funded GM with $52 billion, while the Canadian national and Ontario provincial governments weighed in with another $9.5 billion as the car maker went through bankruptcy protection last year. The current re-payments are five years ahead of schedule, with GM trying to show it’s able to reduce the US government’s 61% ownership of the company. The one-time flagship of the US auto industry still owes $45.3 billion to the US taxpayer and $8.1 billion to Canadian authorities, which own about 12% of the company.

A day after an Iraqi court ordered a partial recount of ballots cast in last month’s national elections, Ayad Allawi, a former prime minister whose political alliance won the most votes, called for a broader recount of votes, saying his group had evidence of fraud in several provinces in southern Iraq. The court had earlier ordered votes to be recounted in Baghdad Province, the country’s most populous, after Iraqi Prime Minister Nuri Kamal al-Maliki appealed against the results there, claiming there’d been widespread ballot manipulation. Maliki’s political coalition defeated Allawi’s alliance in Baghdad, by a whisker, but Maliki’s advisers said they expected a far more comfortable victory there.

Argentine dictator gets his come-uppance at last

Reynaldo Bignone, Argentina’s de facto president from 1982 to 1983, was sentenced to 25 years in prison for kidnappings and torture that took place during the country’s 1976-1983 military dictatorship. Before he took the top job, Bignone was a commander at the Campo Mayo army base, which was one of Argentina’s biggest torture centres under military rule. Bignone, now 82 years old, was convicted along with five other former military officers in 56 cases involving torture, illegal detentions and other crimes. Rights groups say of 4,000 dissidents taken to the base, only some 50 emerged alive. Family members of victims applauded the ruling, but said there are hundreds more accused who need to answer for their crimes.

The US has nearly 10% unemployment, after the Great Recession stripped away millions of jobs. But one place where work is plentiful is in remote North Dakota, where oil fields create hope that the US can meet its energy needs. But the state bordering Canada has a unique problem. It has plenty of jobs, but nowhere to house people. In the small town of Williston, every motel room is booked for months in advance, while every apartment block and trailer park has a long waiting list. Some new workers are finding themselves sleeping in their vehicles in shopping mall parking lots, after laid-off workers flooded in from California, Florida, Minnesota, Michigan, Wyoming and elsewhere. Hundreds more are sleeping in tents, in offices and in the basements of people they barely know.

US President Barack Obama has paid tribute to Dorothy Irene Height, who died aged 98, calling her “the godmother of the civil rights movement” and an American hero. Height received two of America’s highest honours – the Presidential Medal of Freedom in 1994 and the Congressional Gold Medal in 2004. The grand old lady marched alongside Martin Luther King Jr. and led the National Council of Negro Women for 40 years. She was active well into her 90s and received rousing receptions at events in Washington, having devoted her life to the struggle for equality. Height was the second major US civil rights figure to die in less than a week. Benjamin Hooks, the former long-time head of the National Association for the Advancement of Colored People, died last week in Memphis aged 85.