16 April: Tea Party mob take protest to the heart of Am... 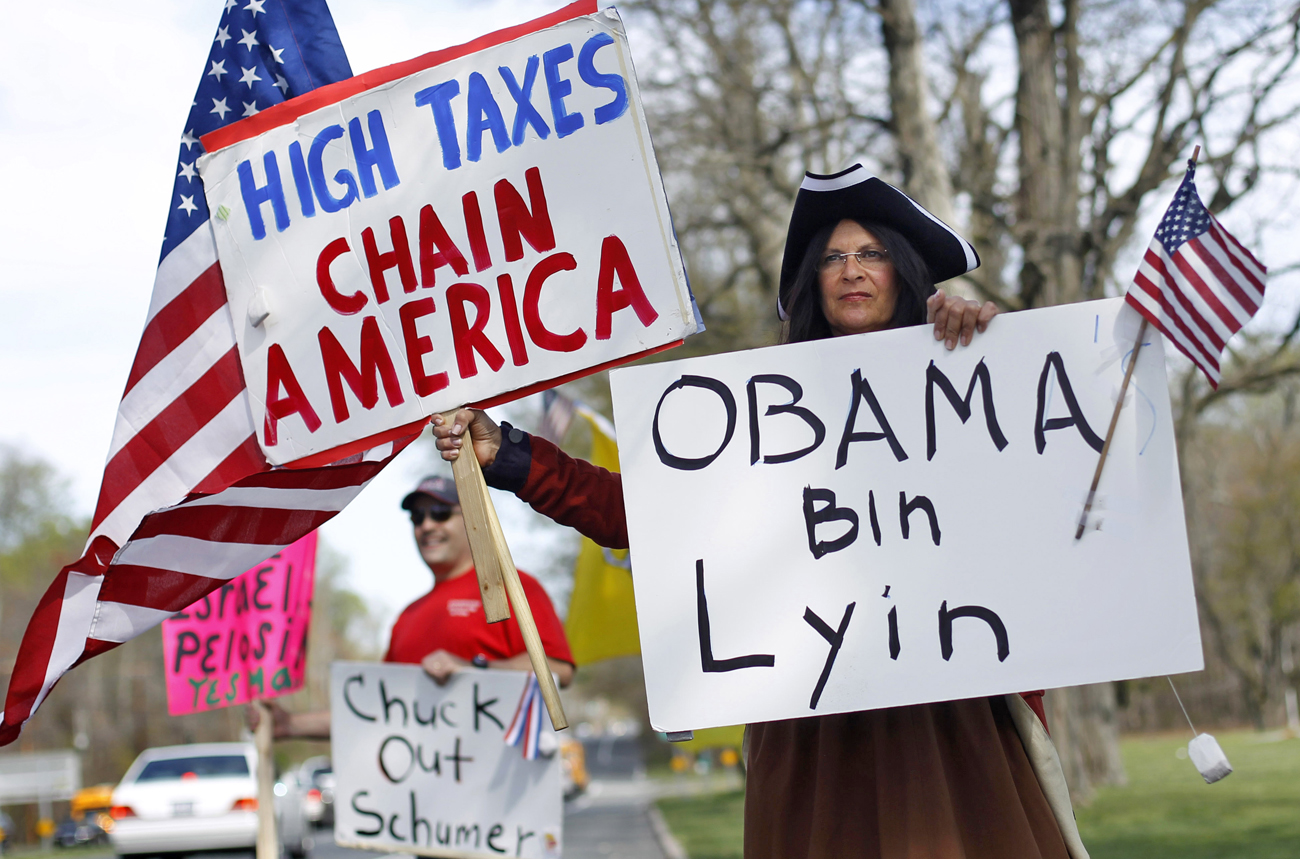 Protesters from the US political phenomenon, the Tea Party, marked the nation’s April 15 federal tax filing deadline with a protest against government spending, which they see as a tax-grab. The mainly well-educated and more affluent members of the new movement are opposed to the general Democrat notion of big government, but also aren’t entirely in the Republican camp, despite members largely being male, white, middle-aged and conservative. Several thousand of them rallied in Washington’s Freedom Plaza at the end of a nationwide series of protests. While their numbers are modest, Sarah Palin and Republican Congresswoman Michele Bachmann won roars of approval over damning the administration of President Barack Obama for trying to nationalise healthcare, energy, financial services and other parts of the economy. Who knows, the huntin’, shootin’, fishin’, big-oil supporting Palin might find a way into mainstream Republican hearts through the Tea Party. For her, the political opportunity is as sweet as sugar.

Brit politicians slug it out on US-style TV debate

Britain’s main political rivals Prime Minister Gordon Brown and his Tory counterpart David Cameron played a hard game of verbal volleyball over spending cuts, taxes and political reform in the first US-style party-political television debate ever held in the UK. Brown accused Cameron of glossing over planned spending cuts during the 90-minute encounter, while Cameron told Brown he was trying to frighten voters. Nick Clegg, the leader the Liberal Democrats – Britain’s weak “third force” party – came out best, it seems. He weighed in that neither of the men was being honest about the scale of cuts needed. British politicians rarely address the public in this way, complaining they’re limited to sound bites on TV and radio. Media reports say the only memory voters might have taken away with them is that Brown and Cameron both said they agreed with things that Clegg said, and polls taken immediately after the debate suggested Clegg had won. There are two more debates over coming weeks, before the general election on 6 May. May the best man (and party) win.

In a Hollywood action movie scene, a Thai anti-government leader escaped arrest by scaling down a hotel wall using a rope and jumping into a getaway car. But, the theatrics had a sinister side as demonstrators took two police officers hostage to ensure his safety. A largely peaceful four-week protest by tens of thousands of “Red Shirt” protesters in Bangkok turned deadly last week, when at least 24 people were killed. The Red Shirts’ support deposed Prime Minister Thaksin Shinawatra, who claims to represent the urban and rural poor. They’re campaigning to oust Prime Minister Abhisit Vejjajiva, dissolve Thailand’s Parliament and hold fresh elections. Unfortunately, the stand-off looks like it’s just warming up.

Pope breaks silence on abuse, but unable to get to grips with common law

Pope Benedict XVI has broken his silence on sexual abuse in the Catholic Church, saying both that Catholicism was under attack and that Christians must repent for sins and recognise mistakes. Reports say victims’ groups immediately dismissed his comments, claiming they mean nothing unless the Pope takes action to safeguard children from paedophile priests. He told a mass inside the Vatican for members of the Pontifical Biblical Commission that the world was now telling the Church about its sins, and it was necessary to repent. The Pope added a litany of religious comfort, but said nothing about what practical steps he would take to purge the scourge.

Obama orders that gays and lesbians get hospital visiting rights

The White House announced rule changes that will make it easier for gays and lesbians to make medical decisions on behalf of their partners. And US President Barack Obama also ordered his health secretary to grant hospital visiting rights to same-sex partners in any Medicare or Medicaid hospital that covers the elderly and the poor. Obama said that across America, patients are denied the kindness and caring of a loved one at their sides, adding the new rules could also help those who rely on friends and members of religious orders to care for them. He added gays and lesbians are uniquely affected in the US medical system because they’re often barred from visiting partners. Viva, Mr President, Viva!

A leading Cuban academic went out on a limb by stating on the state-run website of the National Artists and Writers Union of Cuba that corruption at the highest levels of government was the greatest threat to Cuba’s communist system, and not the small number of dissidents. The article by historian Esteban Morales said some top Cuban officials are preparing to divide the spoils if Cuba’s political system falls apart. Members of the artists’ union have been highly critical of the government in the past, but often to no effect. Morales has also appeared on state television to defend the government on other issues. Maybe times they are a’changin’. Hopefully not for the worse.