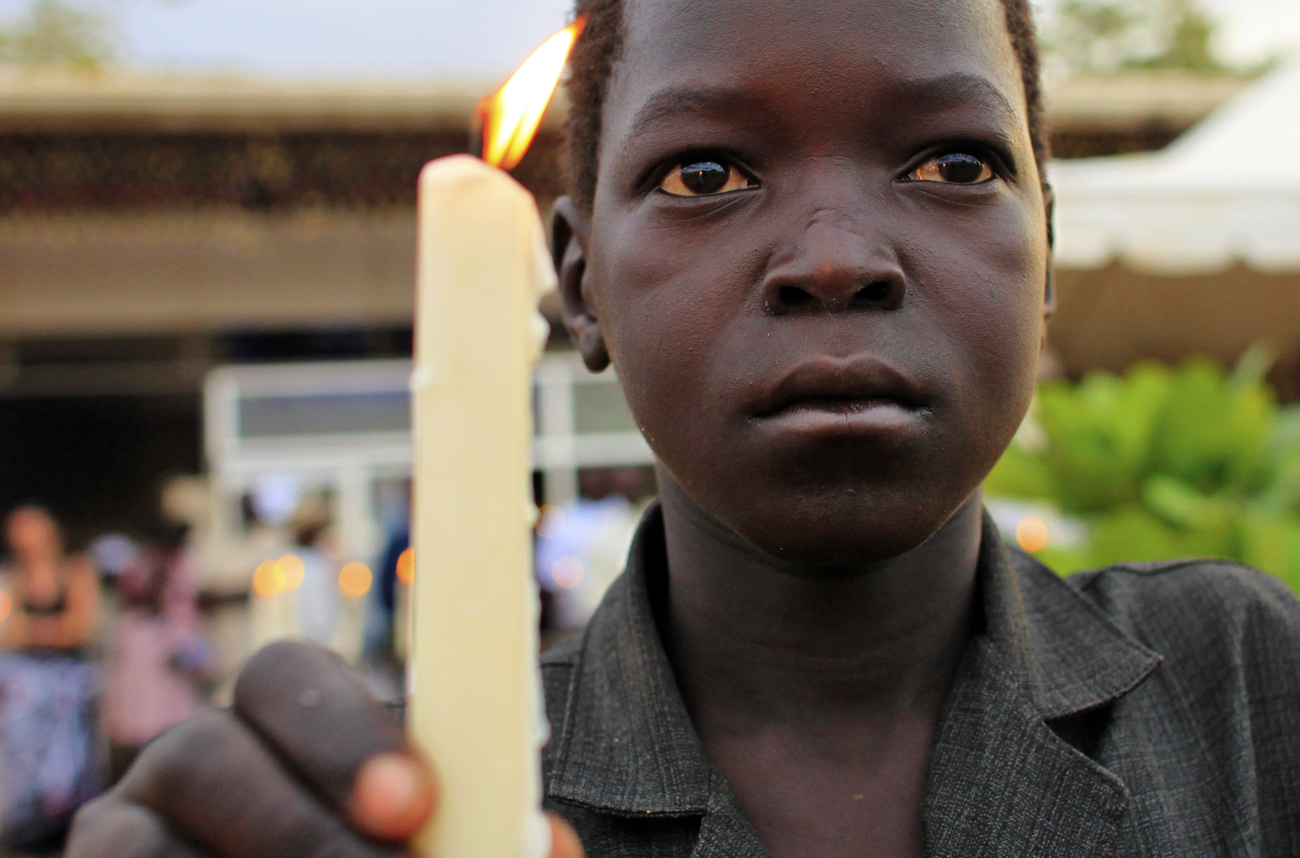 Four South African peacekeepers of the joint UN/African Union police force in Sudan’s Darfur region have been kidnapped, but it’s not known which group carried out the abductions. The deadly seven-year war in Sudan’s western province has prompted a flurry of kidnappings of foreigners in the past year, mostly by armed men demanding ransom. One Red Cross worker was released last month after 147 days in captivity. Janjaweed (which means “Devil on Horseback”) militia comprised of nomadic Arabic-speaking African tribes fought a brutal conflict with Darfur’s sedentary African population over grazing grounds and farmland, coming into conflict with Darfur rebel groups, the Sudan Liberation Movement and the Justice and Equality Movement.

Photo: A boy holds a candle during a prayer for peace in Juba, south Sudan April 10, 2010. Activists warned on Saturday on the eve of Sudan’s historic elections of widespread misdeeds threatening to mar a vote that had been hoped would give Sudan new democratic legitimacy and help end decades of conflict. REUTERS/Goran Tomasevic

Sudan’s ruling National Congress Party says it’ll invite opposition groups to join the government if it wins the current elections. That sounds very pragmatic, since South Sudan’s main party, the Sudan People’s Liberation Movement, is one of several large and small parties that is fully or partially boycotting the elections, claiming government plans to rig the outcome. Voting across Sudan ends today after five days of what’s been a pretty chaotic poll. Critics say there’s been intimidation of voters, ballots were delivered to the wrong polling stations and had errors on them that effectively nullified a free and fair vote. But the party of President Omar al-Bashir says it’ll invite all parties, including those that skipped the polls, to join the government. Bashir’s wanted by the International Criminal Court in The Hague for war crimes in Darfur, where some 300,000 people have died in a seven-year conflict. The elections are likely to cause more problems than not, and may see a reversion to civil war.

Zimbabwean President Robert Mugabe denied a statement by a spokesperson for Prime Minister Morgan Tsvangirai that government had suspended regulations issued last month requiring foreign firms to detail their shareholdings and how they plan to achieve black control. The country’s so-called indigenisation law has further divided the warring one-year-old unity government of Mugabe’s Zanu-PF party and Tsvangirai’s Movement for Democratic Change. The MDC is largely of the opinion that it’ll damage efforts to rebuild an economy that shrank by more than 40% from 2000, after the confiscation of white-owned farms. But other reports say the law has, in fact, been shelved after government declared it null and void pending further consultations. There’s little love lost between Zanu-PF and the MDC, adding to the uncertainty that’s caused Zimbabwe’s stock market to fall by 10% since the law’s introduction, with shares in the critical mining sector losing 20%.

Djibouti’s parliament has approved an amendment to the constitution which removes presidential term limits, according to Reuters. The MPs also cut the presidential mandate to five years from six, created a senate and abolished capital punishment. While this paves the way for President Ismail Omar Guelleh to run for a third term after 2011, some of the amendments sound eminently sensible. But seeing as the Horn of Africa country is a buffer between Eritrea from anarchic Somalia, it’s bound to have its paradoxes. It hosts ex-colonial master France’s largest military base in Africa, plus a big US base, while also harbouring foreign navies fighting piracy off the coast of Somalia. In addition, it serves as the principle access point for goods entering and exiting land-locked Ethiopia. If you do all that, well, hey, you don’t have to be entirely democratic.

Legislators in Borno state in north-eastern Nigeria are debating The Islamic Preaching Bill, which would outlaw preaching likely to cause death and mayhem, as well as require most clerics to obtain a preaching licence. Sharia law runs alongside secular law in 12 of Nigeria’s 36 states, and the bill was proposed after an Islamic sect known as the Taliban was blamed for deadly violence across northern Nigeria. Under the new bill, there would be stiff jail terms and fines for clerics found guilty of inciting contempt of any religious belief. Imams of Friday mosque congregations and those who have led prayers at religious festivals would be exempt. Maybe such a bill should be introduced in Plateau state, after clashes between Muslims and Christians in the city of Jos killed hundreds, if not thousands of people over the past few years.