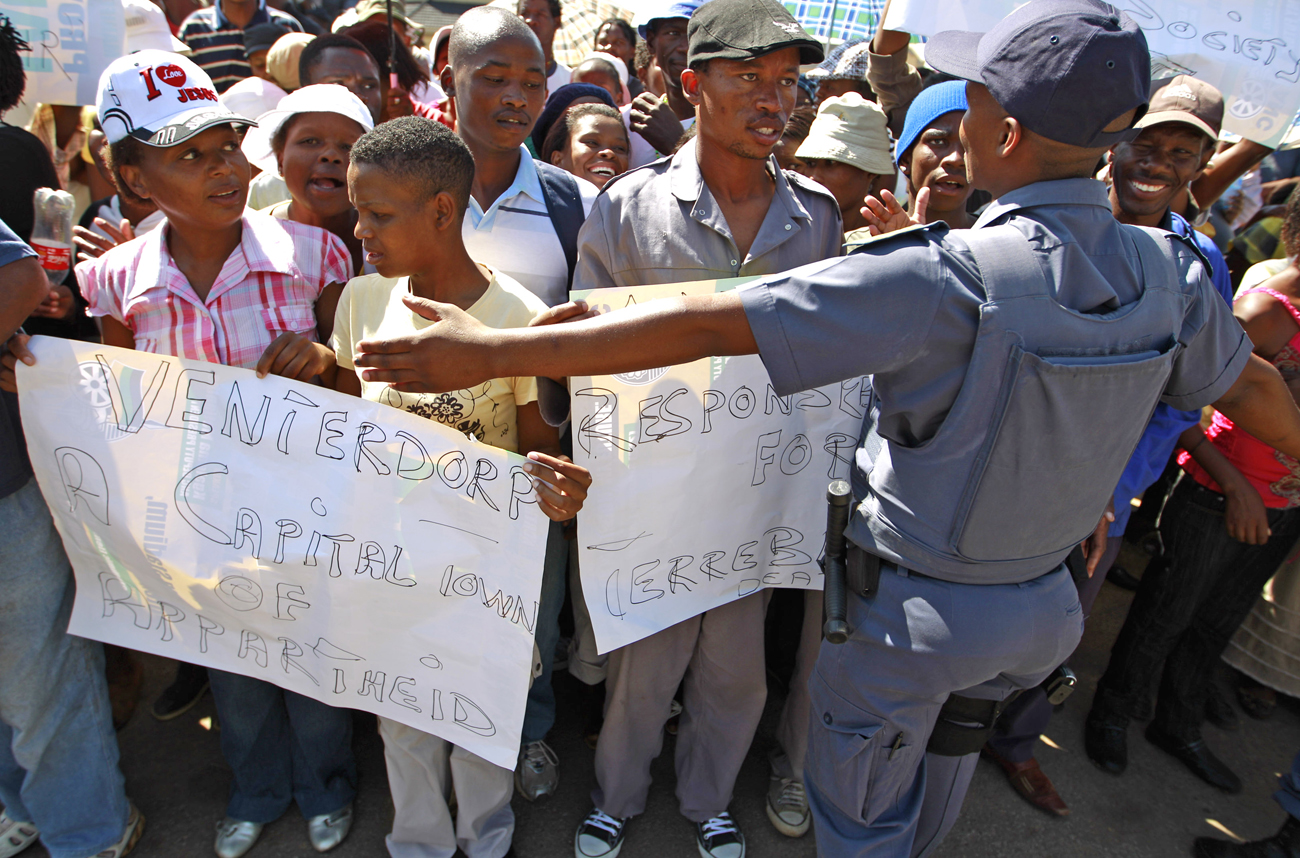 The cases against the two people accused of murdering the former leader of the Afrikaner Weerstandsbeweging, Eugene Terre’Blanche, have been deferred for almost a month, and that means things will calm down significantly. And, as summer has given way to autumn in the troubled town, there’s strong evidence of tempers cooling down in Ventersdorp too.

As the morning started, vuvezelas rent the air, along with shouts of “Amandla”. There was a rush to get around the side of a large building. Suddenly it all made sense. The building was the mayor’s office. And there’s a nationwide municipal strike on. So that union well known for its cool heads – Samwu – got stuck into having a little shout and a toyi-toyi, just 50m from where we expected the men in khaki to gather.

Samwu members were a little provocative. It certainly sounded as if they were singing a certain song that Julius Malema has been expressly told not to sing, by the court.

But it all turned out alright. The khaki-clads didn’t arrive, apart from one or two officials. Andries Visagie, Gwede Mantashe’s opposite number at the AWB was the most prominent. He really is a throw-back. Everyone wanted a piece of him, primarily e-tv who felt they hadn’t made enough of a noise about it the last time. For heaven’s sake, he’s the subject of a re-mix of a different popular song with Chris “Don’t touch me on my studio” Maroleng. He kept his temper until a young black journo from a local paper, the Western Sun,  couldn’t contain his rage any longer. “What about the land you stole from my people?” he asked. Visagie’s response makes Mantashe on Hitachi sound eloquent, “I won’t talk to you about that until you lay a charge at a police station that my people stole your farm,” he said. Yip folks, we’re dealing with a real “with-it” guy here.

At one point, one of the protesters, who may or may not have been a Samwu member, removed the crown of thorns from a Boer Christian monument outside the court. He had it around his shoulders, while a younger guy took the three red cloth strips hanging off it and pretended he was a horse, with the strips as reins. Visagie was visibly angry, and claimed the scene was ironic, because it was Christ who had been treated like this. Photo: Supporters of the Afrikaner Resistance Movement (AWB) arrive outside a court before the appearance of two black farm workers charged with beating and hacking white supremacist and AWB leader Eugene Terre’blanche to death in Ventersdorp, in the North West Province, April 14, 2010. REUTERS/Peter Andrews

In court, things moved much slower. The most significant development is that the teenaged accused has been found competent to stand trial. So, even though he’s 15, the court found he understands what he’s accused of doing and how the trial process works. But he very sensibly abandoned his bail application. He will now stay in a “place of safety”, organised by the government for the trial. Which, let’s be honest, is where he should be. He’ll appear in court again on 14 May.

That means the bail application for his co-accused, Chris Mahlangu, can now take place in the full media spotlight.

Like so many magistrate’s courts around the country, it’s a squalid little room. About the size of your average school classroom, with the magistrate sitting high above everyone else. There’s a flag in one corner, with several colours rarely seen in this part of the world, and the usual tables for the lawyers. The public gallery has three rows, and they were packed. The first row was full of family and AWB people. Some of them had a go at the media in general for our coverage. It’s quite unbelievable, really. I’ve seen many examples where the media have got things wrong, but hardly ever seen someone aggressively go at reporters in that way. It’s an AWB thing, we suppose. The psychology behind every member being the main man in their particular corner of hell.

The thing that stood out were the police. Riot gear in a court room is a rarity. But there were nine cops in full combat gear inside. That may say something about their view of the local AWB members there.

Eventually Mahlangu was brought in. He’s of medium height, quite thin, the start of a beard around his jaw. He wore the usual old takkies and trousers you expect a farm labourer to wear. He didn’t say a word, and the proceedings were translated into Setswana for him. He stood up, hands behind his back. It may have been our imagination, but there was something a little haunted about him.

Once things got under way, it was about the technicalities of the law. Basically, to apply for bail, you need to have what’s called a “fixed place of abode”; a permanent address. Mahlangu doesn’t have one. And it seems the prosecutors have an affidavit from his uncle saying he doesn’t stay with him, though the defence has a different story from the uncle. So now they need to sort that out, which could take a while.

And that was that. Everyone, including the magistrate Makgaola Fesa, repaired to the Wimpy for lunch. He had a burger and chips, and a Coke Zero, if you must know. He enjoyed the banter of the journos around him, but magisterially kept his distance.

The upshot of all this is that he will be back in about four weeks’ time, 10 May. Just in time for all of us to have forgotten Ventersdorp and Terre’Blanche, and hopefully Malema and that bloody little ditty of his, that shouldn’t be sung, but shouldn’t be illegal either. And hopefully we’ll be a lot more interested in that silly little round ball. Perhaps someone sane will find a way to get this trial moved out of here to a place where the accused can be treated properly, and the Terre’Blanche family can also see justice being done.