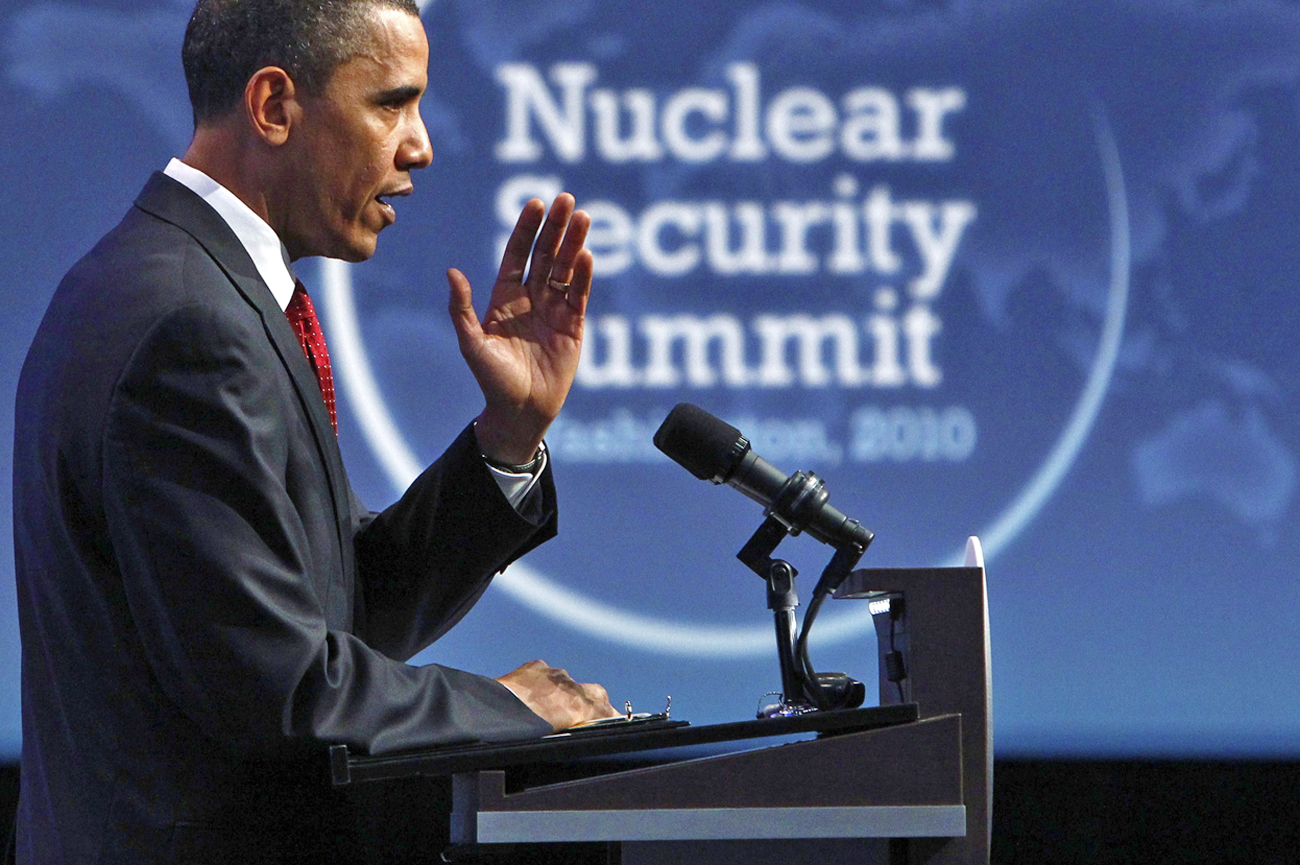 The two-day Washington Nuclear Summit, initiated by US President Obama, came to a close with a final communiqué that commits attending nations to secure all nuclear material in four years.

World leaders agreed to secure or destroy hundreds of thousands of tons of weapons-grade nuclear fuel by 2014, after Obama called on the rest of the leaders “not simply to talk, but to act” to head off the risks of nuclear terrorism and proliferation.

The communiqué spells out 12 obligations of signatories, including a promise to maintain effective security of the nuclear material in their countries. It also commits them to a specific work plan of best practices, it encourages participants to join international efforts to restrict the exchange of nuclear material, and directs nations to make new investments in nuclear security measures.

Earlier, on the second day of the 47-nation Nuclear Security Summit, Obama told attendees that the risk of a nuclear attack was on the rise – despite the Cold War being over – but this time it could be from terrorists rather than an enemy nation. Obama said the current nuclear reality was a “cruel irony of history” and efforts by al-Qaeda to gain access to fissile materials means “the risk of a nuclear attack has gone up”. He added that it was time “not simply to make pledges, but to make real progress for the security of our people. All this, in turn, requires something else, something more fundamental. It requires a new mindset — that we summon the will, as nations, as partners, to do what this moment in history demands.”

Underscoring his point, Obama said dozens of countries had nuclear materials that could be sold or stolen, and that a weapon made from an apple-sized lump of plutonium could kill or injure hundreds of thousands. The document calls on the 47 countries to act together to prevent “non-state actors” — read al-Qaeda, friends and similar — from obtaining nuclear technology or materials and it urges the nations to work cooperatively “as an international community to advance nuclear security, requesting and providing assistance as necessary”. As a practical matter, this may be hoping for some unlikely levels of cooperation among Jordanians, Saudis and Algerians, on the one side, and the Israelis, or, for example, between India and Pakistan.

And yet, even before the final communiqué, there had already been a couple of early dividends from the meeting. China appeared to have agreed to work more closely with the US on possible sanctions against Iran, and the Ukraine had agreed to divest itself of nuclear bomb-making materials. And Russia’s President Dmitry Medvedev gave the conference a boost as well with his announcement that Russia would shutter its last plutonium factory, a significant milestone to limit the spread of fissile material.

A report published at the beginning of the week by a Harvard non-proliferation study group said Pakistan’s nuclear stockpile was the least secure from theft or attack in the world. In response, Pakistani Prime Minister Yusuf Raza Gilani, who attended Obama’s conference, insisted his nation’s nuclear weapons were guarded appropriately.

Meanwhile, UN secretary general Ban Ki-moon said at the beginning of the week that he was also pushing for a ban on the production of fissile materials for atomic weapons. The UN-backed Conference on Disarmament in Geneva had considered just such a ban, but movement on that has been blocked by Pakistan, arguing it would permanently disadvantage Pakistan vis-à-vis its strategic competitor, India. But Ban told the media he had nevertheless repeatedly called on the Geneva conference to begin discussions on a fissile materials treaty without delay so as to combat the threat of nuclear terrorism.

China’s gradual move toward America’s goal of sanctions against Iran, followed by Ukraine’s plan to dispose of its highly enriched uranium stockpile gave some vooma to Obama’s efforts. And after his meeting with Chinese President Hu Jintao, White House national security aide Jeff Bader said the Chinese were “prepared to work with us” on Iran and that this was yet “another sign of international unity on this issue”. Bader was, however, less forthcoming on what, precisely, the Chinese had agreed to do. Obama himself had conceded that “sanctions are not a magic wand”.

Meanwhile, in Beijing, Chinese foreign ministry spokeswoman, Jiang Yu said, “China always believes that dialogue and negotiation are the best way out for the issue. Pressure and sanctions cannot fundamentally solve it.” But she did add that China does support a “dual-track strategy”, combining diplomacy with the possibility of international sanctions against Iran. China imports 12% of its petroleum from Iran and this contributes to China’s opposition to sanctions that would include petroleum products.

The Ukraine, a country that had already given a real boost to arms control in 1994 when it surrendered the nuclear weapons it had inherited after the collapse of the Soviet Union, agreed to get rid of its weapons-grade fuel by 2012.

As part of the larger event, Obama also held several bilateral meetings with some attendees as part of his effort to energise efforts to wall off nuclear materials from possible terrorists. He used his meeting with Hu Jintao to keep pressure on Beijing to allow the currency markets to revalue China’s currency, although the Chinese leader insisted that any tinkering with the yuan will be done by Beijing in accordance with its own domestic interests. This is a critically important domestic political task for Obama because China’s fixed exchange rate keeps Chinese products artificially cheap relative to the dollar. According to many experts, this artificially low value handicaps American exports that in turn costs tens of thousands of American jobs. 2010 is a mid-term election year and jobs figure to be a major issue in the election – and that could be bad news for many incumbent Democratic congressmen and senators. But, presumably to head off further criticism and lessen the tension between the US and China, Chinese officials have already told treasury secretary Tim Geithner they are about to resume a controlled relaxation of their exchange rate.

In continuing the momentum the conference was meant to create, South Korea has agreed to host the next conference two years hence. Discussing this next event, Korean President Lee Myung-bak told reporters North Korean leader Kim Jong Il would not get an invitation to attend – until Pyongyang gave up its nuclear weapons ambitions. North Korea’s efforts in its nuclear weapons programme kept it out of the Washington summit.

So, while there remains lots and lots of things to do, maybe there is finally some momentum on decreasing the amount of nuclear weapons and materials awash around the world – and maybe Obama has earned that Nobel Peace Prize – even if six months late.

Photo: U.S. President Barack Obama speaks during a news conference at the end of the Nuclear Security Summit in Washington, April 13, 2010. REUTERS/Jim Young