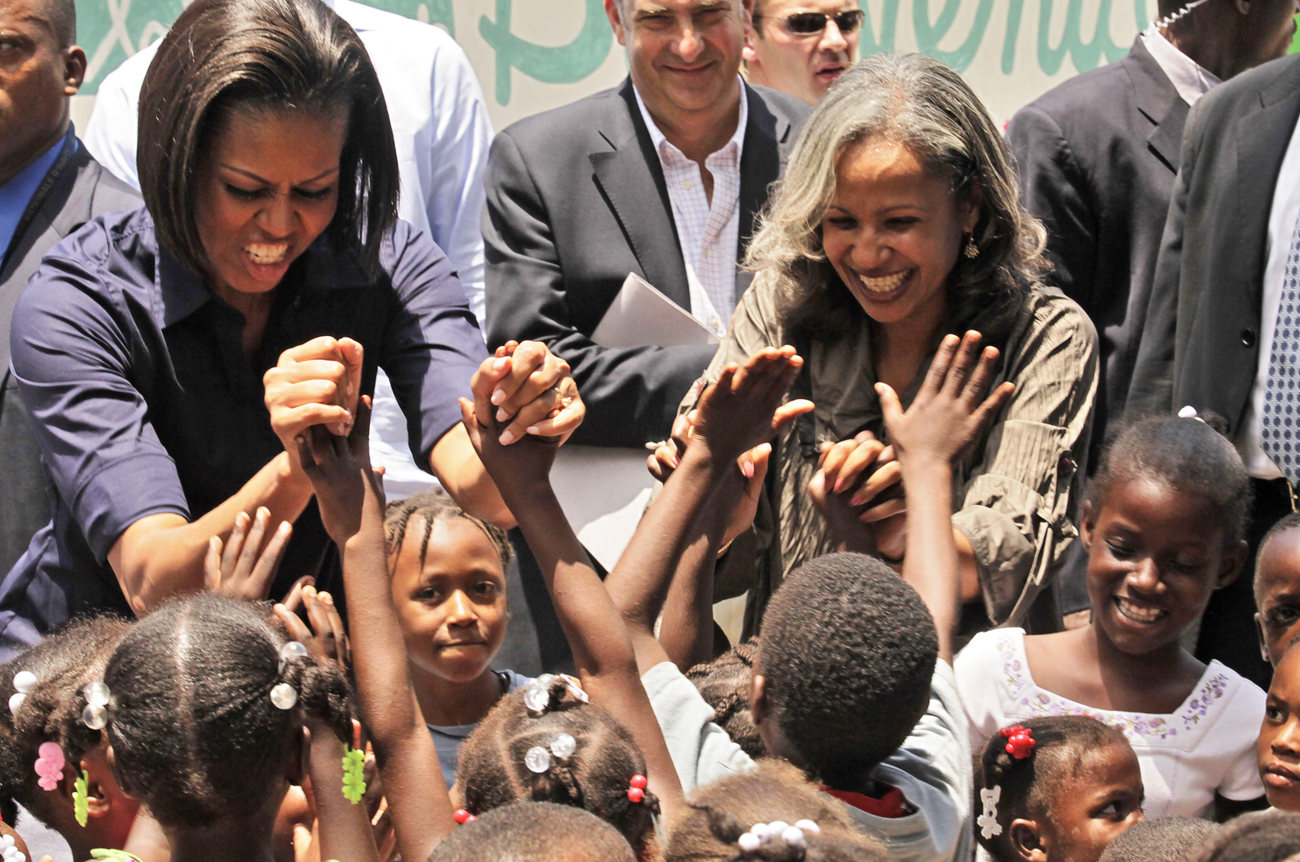 US First Lady Michelle Obama made a surprise to Haiti, in a high-profile reminder that the world hasn’t forgotten the earthquake that killed some 200,000 people and devastated the island’s capital Port-au-Prince and economy. She travelled with Jill Biden, Vice President Joe Biden’s wife, on a helicopter tour of the city, before landing at the rubble that is the government palace to meet President René Préval. The women later walked through camps housing families living under bed sheets and tents. Former US presidents Bill Clinton and George W Bush have also visited the stricken country in recent months, but Obama’s trip highlights relief efforts that are under way, as the attention of the world threatens to wane ahead of the hurricane season. The US has provided nearly $1 billion in humanitarian aid and pledged some $1 billion more.

Photo: U.S. first lady Michelle Obama (L) and Elisabeth Debrosse, wife of Haitian President Rene Preval, greet children during her visit to a local child welfare project in Port-au-Prince April 13, 2010. U.S. first lady Obama made an unannounced visit to disaster-stricken Haiti on Tuesday and said she was struck by the devastation inflicted by the January 12 earthquake on the poor Caribbean country. REUTERS/Eduardo Munoz

Greece raised about $2 billion in a heavily oversubscribed bond issue that’s a key test of investor confidence in the ability of the debt-laden country to repay more than $70 billion worth of loans in 2010. It was Greece’s first debt sale since a deal with Eurozone nations provided the nation with a safety net against default on tranches of its $410 billion total debt. But Greece is paying a higher premium on 12-month bonds, yielding 4.85%, and on 6-month notes at 4.55%, compared with a yield of 2.2% on 12-month bills, and 1.38% on 6-month bonds, in a January issue. The Greeks initially wanted to raise a little more than $1.6 billion, so investors obviously are optimistic that they’ll get their money back, despite the government of Prime Minister George Papandreou battling an annual budget deficit of 12.7%, three times the EU limit.

US President Barack Obama is to attend the funeral this weekend of Polish President Lech Kaczynski, who died in a plane crash in western Russia. All 96 people aboard a Soviet-built Polish government jet were killed when the aircraft crashed while trying to land in the city of Smolensk, where Polish political, military and religious leaders had travelled to attend a nearby memorial service for thousands of Polish military officers slain by Josef Stalin’s secret police in 1940. Russian President Dmitry Medvedev and President Nicolas Sarkozy of France are also due in the city of Krakow for the funeral, and German Chancellor Angela Merkel is likely to attend too. Reports say the date of the next presidential election will be announced soon.

Tiger Woods has sent in his entry form for the US Open, after coming fourth in the Augusta Masters tournament won by Phil Mickelson. The Masters was his first competition since a sex scandal broke some five months ago. The Open will be held between June 17 and 20 at Pebble Beach in California, where a decade ago Woods scored a runaway tournament victory, winning by 15 strokes against runners-up Ernie Els and Miguel Angel Jimenez, tying the tournament scoring record. A disappointed Woods said he’d take a short break after the Masters, no doubt meaning that he’d set his focus on winning a major to get him back into the game.

Israel told it citizens to leave Egypt’s Sinai Peninsula immediately, saying it had firm intelligence of an expected terrorist kidnapping. The Red Sea coast is a favourite holiday spot for Israelis, and news reports indicate that some 1,200 Israelis are likely currently there. The authorities fear that a terror cell intends to abduct an Israeli and hold them in the Gaza Strip, which Israel invaded in January 2009. Palestinian militants in Gaza have been holding an Israeli soldier for more than three years, and another captive would provide the kidnappers with more leverage over the release of alleged Palestinian militants in Israeli jails, along with other issues affecting peace in the Middle East.

US can keep Kyrgyzstan air base for another year from July

Roza Otunbayeva, the interim leader of Kyrgyzstan, told the AP news agency that her government will extend the lease of a US air base for a year from July. The Manas base is used by the Americans to prosecute the war in Afghanistan. Otunbayeva also guaranteed deposed President Kurmanbek Bakiyev’s safety if he resigns his post and leaves the country. Bakiyev is currently hiding out in southern Kyrgyzstan, where his political support is strongest. He says he’s willing to step down, but wants security for himself, his family, and a circle of close associates. Otunbayeva earlier said she wouldn’t guarantee protection for Bakiyev’s family, who are accused of nepotism and corruption, among other abuses. Bakiyev has already been stripped of his presidential immunity, and the country’s special forces will seek to arrest him if he doesn’t turn himself in.

Toyota’s suspending US sales of the Lexus GX 460 four-wheel drive after a local consumer group warned potential customers that the vehicle could roll over. The Japanese car maker says the vehicle is safe, but will halt sales in order to identify and, if necessary, correct the alleged safety issues. The world’s largest vehicle maker has recalled nearly 9 million cars around the world over claims they have faulty accelerator pedals and sticky floor-mats that compromise braking. The group Consumer Reports judged the Lexus a safety risk after conducting standard emergency-handling tests.