Joburg’s urban poor: why the City wishes they didn’...

Joburg’s urban poor: why the City wishes they didn’t exist 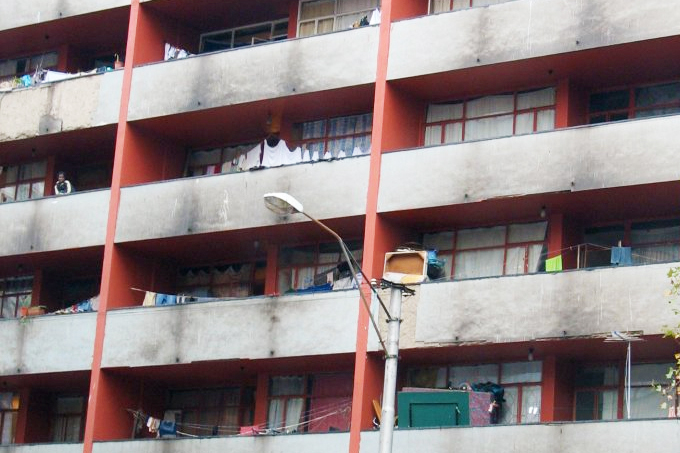 The case of the residents of San Jose, a “condemned” building in Hillbrow, went through two lower courts before the Constitutional Court finally ruled that the City of Johannesburg could not evict people without offering a suitable alternative. We visited the new building, and it appears the City may be in contempt of the judgment. What does this say about Joburg’s attitude to its poor?

In September 2008, the residents of San Jose, a building in Olivia Street, Hillbrow, calmly cleared their rooms of their belongings and took them down to the ground floor. The smell of sewage in the garage was as strong as ever, but it had long stopped bothering them. For years they had been living resourcefully in the abandoned block of flats, overcoming the lack of electricity and water by bringing in paraffin lamps and five-litre drums, getting up at 4am every Sunday to scrub and clean the corridors and public spaces. They paid no rent – there was no official landlord to pay it to – but then neither was San Jose a “hijacked” building. Thanks to the civic pride of the residents and the uncompromising attitude of Nelson Chawe, the tough chairman of the informal committee, gangsters and undesirables had never managed to gain a foothold.

And now they were leaving, all four hundred of them, for a building a dozen blocks to the south – one with lights at the flick of a switch and water at the turn of a tap. With the help of the human rights lawyers at the Centre for Applied Legal Studies at Wits University, they had beaten the City of Johannesburg in a landmark case before the Constitutional Court. The mayor’s office, which for years had been trying to put them on the street, had been ordered to offer the residents of San Jose alternative accommodation in the Joburg CBD.

It was a reluctant concession on the part of the City. In October 2008, about a month after the move to the new building, I arranged a follow-up interview with CALS head of litigation Stuart Wilson, who had taken me on a tour of San Jose the year before.

We discussed the long route to that point – the fact that the San Jose residents had won in the High Court and lost in the Supreme Court of Appeal; and that, although they’d finally won in the highest court in the land, the City had not really undergone a change of heart.

“The City had nothing like a policy for the thousands of poor people it wanted to evict,” said Stuart. “And it still doesn’t.”

He also said: “The way I see it, the City doesn’t want any sort of relationship with the poorest and most vulnerable of its citizens. It’s as cynical as that. It regards itself as a business. Its product is a self-sustained, commercially oriented, private property urban core. In that situation there is no place for people who can’t pay rentals.” Eighteen months later, Stuart’s words appeared prophetic. Last week, on Thursday April 8, I was invited to visit the new building occupied by the San Jose residents, an old military hospital on the corner of Koch and Quartz streets in Joubert Park known simply as “MBV”. To report that the building, like the dangerous area it inhabits, had seen better days was not the point of my visit; the reason for the invitation was rather to ascertain whether staff at the Johannesburg mayor’s office, as alleged, weren’t taking the orders of South Africa’s top judges seriously.

According to Mary Munyembate, who recently took over from Stuart Wilson as head of litigation at CALS, the City is in contempt of the Constitutional Court ruling. Since she’s been on the job, said Mary, there have been a number of meetings with City officials where “constructive concerns” have been raised. One of the most pressing of these has been the security situation in the building: at San Jose, residents took care of their own security; at MBV, according to the agreement, guards are appointed and paid for by the City.

Problem is, when you’re not a resident with a personal stake and something to lose, you may not be as vigilant. The hired security team have allegedly been drunk on the job – three members of the MBV committee, including Nelson Chawe, the tough enforcer from San Jose, confirmed this – and as a result the entry points have been breached. Gangsters and undesirables, who were so effectively kept out of San Jose, have been entering MBV regularly.

Whenever Mary brings this up in meetings, she told The Daily Maverick, the City’s reaction is blunt: “No, the security company works on a five-year tender, and there’s nothing we can do about it.”

The same clearly goes for the cleaning staff hired by the City. Filthy toilets with droplets of blood and urine on the floor, sinks in the public kitchens blocked by gunk, thick grime covering the stoves – it’s all there for the interested visitor to see, and it certainly wasn’t there when I visited San Jose, where the residents did all the cleaning themselves. Actually, the City accused the residents of breaking the toilets and showers on purpose, Nelson explained, before he took me on a tour of the building to show me how few of them worked. “They said to the court that we are criminals. They want to prove this. It’s from the San Jose days.”

Indeed, the City has every reason to be angry with Nelson and his fellow residents – these were the people, after all, who kept them in messy litigation for years; the same people who eventually proved that the Republic of South Africa does have something called a Constitution, which holds that the rights of human beings to dignity and life aren’t necessarily trumped by concepts like urban renewal.

When we discussed this, Nelson linked the City to a certain political party. “You vote for them one day,” he said, “and the next day they want to put you out on the street.”

Of course, Nelson and the former residents of San Jose aren’t out on the street, which is a victory. Still, despite the Constitutional Court ruling, it’s apparent that the City remains without a strategy for its urban poor. In this context, Johannesburg’s marketing slogan “world-class African city” is meaningless. At MBV, flooding and damp were an endemic problem in every room I was invited into; pools of stagnant water were gathering on balconies and in stairwells, many of the residents had flu. And MBV, it must be emphasised, is one of the very few buildings in Johannesburg where the City has in fact acknowledged that the urban poor exist.

It’s a bizarre catch-22, a scenario where successes and failures almost cancel each other out, and its best summed up by these words of Stuart Wilson from 2008: “The one thing the Constitutional Court did decide is that people can’t be moved from their homes without meaningful engagement. That means going into the buildings, interviewing people, finding out their income, seeing if a solution can be found without an eviction. This is a proposition the City is still completely freaked out by, and since the San Jose judgment there hasn’t been a single mass eviction.”