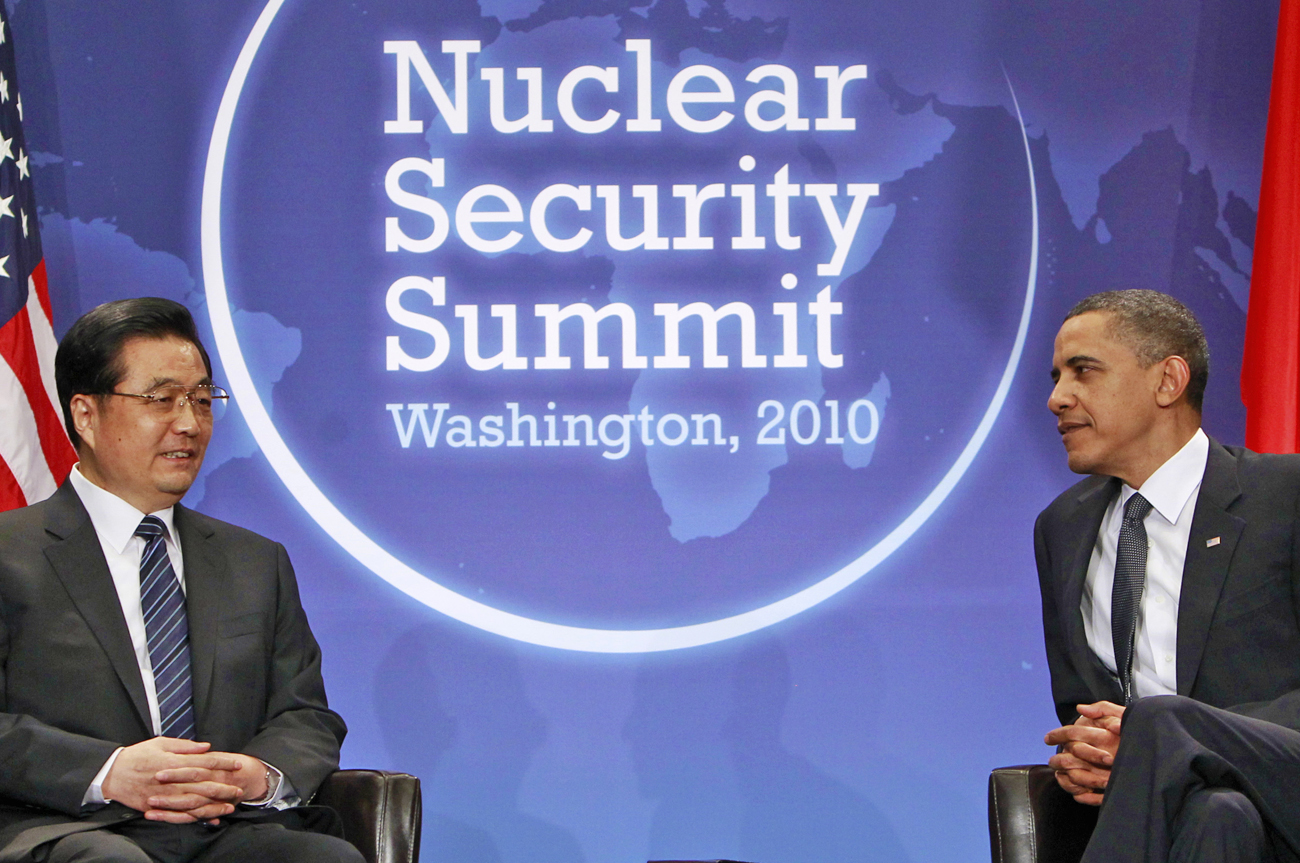 Politicians gathered in Washington for the nuclear summit will not be able to go home afterwards and play down the issue of nuclear proliferation. Especially not after the experts claimed that over time some group will detonate an atomic weapon in a city somewhere in the world.

US President Barack Obama has summoned leaders from 47 nations for a nuclear proliferation summit that is the biggest gathering of government heads hosted by the US since the founding of the UN.

So, why are they coming to Washington? Well, it’s not just for the city’s famous cherry blossoms of April. Obama is trying to impress upon the world the need to deal with the possibility that terrorists could get their hands on a nuclear weapon or two in the future – something Obama has labelled “the single biggest threat to U.S. security”.  Although it probably won’t happen from this session, the Obama administration’s goal is to ensure that in less than five years all nuclear materials in the world become safe from ending up in the hands of some seriously angry people with a grudge to avenge and not much regard for human lives.

As the conference was getting under way on Monday, vice president Joe Biden told the gathered leaders at lunch that:

“The goals of the non-aligned movement and my country on the important issues of nuclear security, non-proliferation, as well as other issues have never been closer than they are today. Along with the Start (II) treaty signed with Russia last week, we’ve made clear that the reductions that are going to take place between our countries are going to be real, transparent, and legally binding.

“The one thing we can all agree on, I hope, is that adding more nuclear weapons or more nuclear-weapon states is the exact wrong approach at this moment in the world’s history, one that endangers the entire community of nations were we allow it to happen.

“There are hundreds of tons of nuclear material scattered over 40 countries, including the USA and many in the countries here.  And just 50 pounds of high purity uranium smaller than a soccer ball could destroy the downtown of all our capital cities and kill tens if not hundreds of thousands of individuals.  So it’s very much in our interest to gain control.”

Perhaps one thing on which we can all agree is that, even if the conference doesn’t reach an agreement on nuclear materials, there are going to be lots of speeches.

Besides the gathering of all these Alpha dogs, there is another, parallel meeting of international experts. One of these, Harvard’s Matthew Bunn, explained the urgency of the issue, noting, “There is a great complacency among policy makers around the world that terrorist groups couldn’t make a nuclear bomb.” Pakistani physicist Pervez Hoodbhoy added that there wasn’t sufficient concern “either in Pakistan or India about nuclear terrorism. Both countries do not see the seriousness of this situation.”

Robert Gallucci, a US non-proliferation expert with long experience dealing with North Korea, undoubtedly received some attention when he said it is probable that over time some group will detonate an atomic weapon in a city somewhere in the world. He also noted, clearly referring to the India/Pakistan dynamic, that “Any country that has suffered serious terrorist attacks, foreign or domestic, needs to take this threat seriously”.

A year prior to this meeting, Obama began his push on nuclear disarmament – now a signature part of his foreign policy agenda – with his speech in Prague, setting out a goal of major reductions in nuclear weapons that should ultimately lead to a nuclear weapons-free world. Since then, he has rolled out a new nuclear policy for the US, promised to reduce the country’s own nuclear arsenal, refrain from nuclear tests and pledged not to use nuclear weapons against countries that do not have them. The White House added an important footnote to this, noting North Korea and Iran do not have the assurance of this pledge because they have not been cooperative with other countries on non-proliferation standards. Photo: India’s nuclear-capable Agni-III missile takes off in its third flight launch system at Wheeler Island, 12 km (7 miles) from the coast of Orissa in eastern India May 7, 2008. India successfully tested a home-grown, long-range missile on Wednesday, capable of delivering a nuclear warhead to targets more than 3,000 km away, the government said. REUTERS

A short time earlier, on the anniversary of his Prague speech, Obama returned to Prague, together with Russian President Dmitry Medvedev to sign Start II that will shrink both side’s deployed nuclear arsenal to 1,550 weapons each. Medvedev is also signing a long-delayed agreement to dispose of tons of weapons-grade plutonium from Cold War-era nuclear weapons.

Although the focus of the conference will be on how to keep nuclear materials out of the hands of non-state actors like al-Qaeda, Iran will undoubtedly be a key subtext as Obama hopes for support for a new UN sanctions against Iran because of its refusal to shut down what the US insists is really a nuclear weapons programme. Iran continues to protest, however, that its programme is to build the nuclear reactors and create the fuel for electricity generation.

Medvedev told American television that while, yes, Iran’s nuclear programme needs to be watched closely, any sanctions “should not lead to humanitarian catastrophe, where the whole Iranian community would start to hate the whole world”. The Chinese have also been reluctant to support further sanctions; the success of any sanctions depends on Chinese and Russian cooperation.

A further problem not likely to come under too much scrutiny at this conference is Pakistan’s growing nuclear capability. Even as that nation struggles to make sure its weapons and nuclear labs can’t be compromised by al-Qaeda, Pakistan is expanding production of weapons-grade fuel. The Pakistanis have insisted they now have no choice, since the George W Bush-promoted US-India nuclear deal ended a long moratorium on providing India with the fuel and technology for nuclear power plants. Critics of this pact argue this has allowed India to use its older facilities to create a new generation of weapons, escalating a South Asian arms race – even as Obama and Medvedev have reached their agreement to shrink nuclear arsenals.

Speaking of Obama’s meeting with Indian and Pakistani leaders before the big conference began, former Senator Sam Nunn, a long-time advocate of measures to safeguard weapons stockpiles, said, “President Obama is focusing high-level attention on the threat that already exists out there…but the fact is that new [Indian and Pakistani] production adds greatly to the problem.” And Obama administration officials have admitted taking up the Pakistan-India arms race at the meeting would be “too politically divisive”.

As the conference began, The New York Times, in a lengthy leader-editorial, set out the challenges for the meeting, noting:

“The president and his aides worked hard to get 46 other countries to attend. (Iran, North Korea and Syria were not invited; Prime Minister Benjamin Netanyahu of Israel pulled out, but his deputy will be there.) They will have to work even harder to get key participants — Pakistan and India are suspicious of any perceived interference and determined to expand their nuclear programmes — to commit to serious actions. Feel-good communiqués will not be enough.

“The meeting needs to produce concrete deadlines, working groups and future meetings to measure progress. Beyond the 20,000-plus nuclear weapons in the Russian and American arsenals, experts estimate that worldwide there are roughly 2,100 tons of material that altogether could be used to make some 120,000 bombs. A bomb’s worth can fit in a suitcase. Most of that material is held by the US and Russia, but there are also stocks in other weapons states and in countries with civilian power programmes.”

And the South African guys got a plug from Obama when he met with SA President Jacob Zuma to praise South Africa’s renunciation of nuclear weapons in the 1990s. “I wanted to especially single out South Africa because South Africa is singular in having had a nuclear weapon programme, had moved forward on it, and then decided this was not the right path; dismantled it, and has been a strong, effective leader in the international community around non-proliferation issues. And so South Africa has special standing in being a moral leader on this issue.”

Nice to be loved.