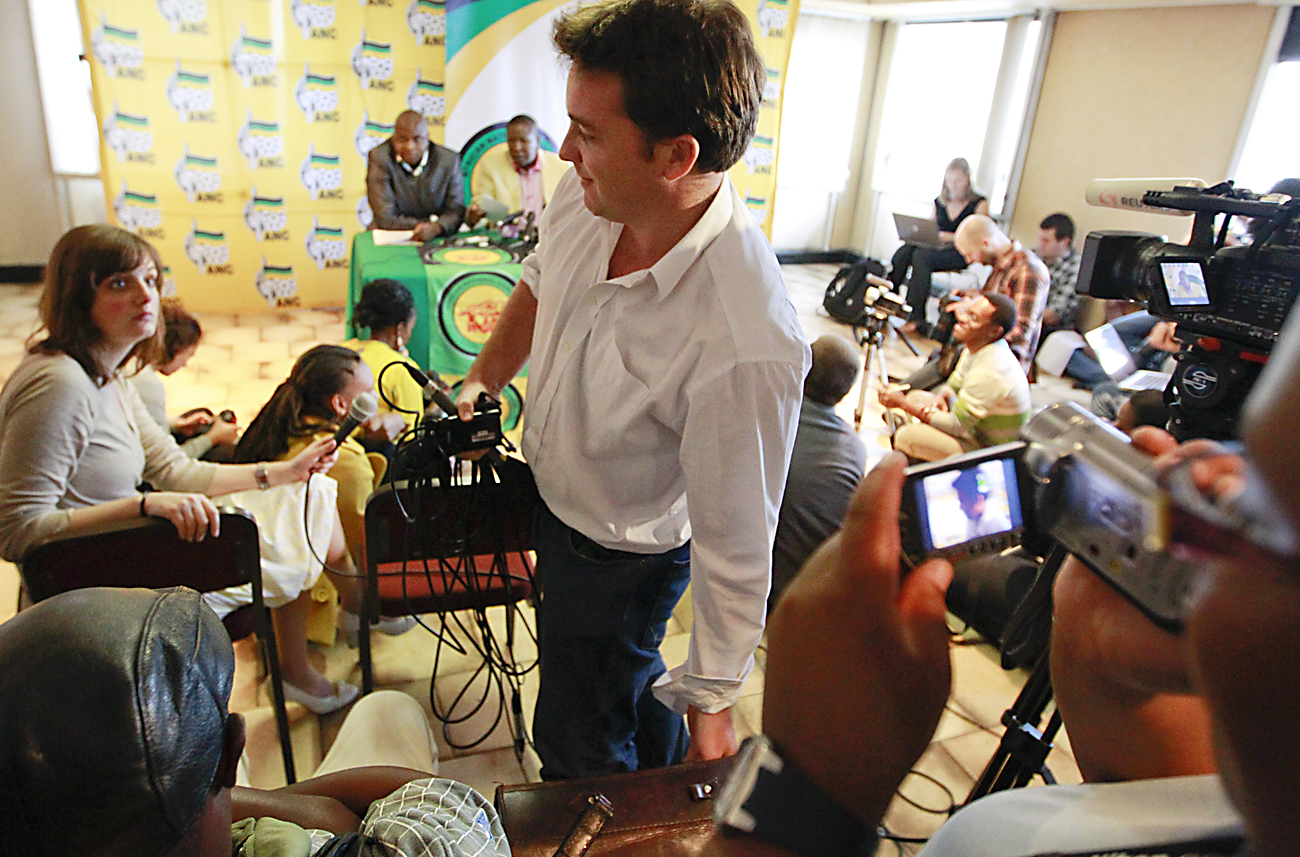 After Malema’s eviction of a BBC journalist from a press conference, whose reaction made the most sense – the National Press Club’s or the ANC Youth League’s? We’ll leave the answers to you.

If ever there was a press conference that called on the South African media to define itself, this was it. And the National Press Club, founded in 1975 as the Pretoria Press Club, made the statement in obdurate terms. Faced with one Julius Malema, a man not yet thirty years old, the organisation drew on the experience of its years. In measured yet firm language, it expressed its dissatisfaction with the ruling party’s youth wing. Politicians could not publicly call journalists “bastards”, it said, and should they do so, all journalists present should protest by leaving the room immediately.

Here, in full, is what the National Press Club said on Thursday, April 8.

Malema kicked a journalist out of a media briefing after calling the reporter a “bastard”.  He was condemning the Movement for Democratic Change for criticising from its office in Sandton, when BBC journalist Jonah Fisher mentioned that the youth league leader lived in Sandton.

He shouted at the journalist saying: “You are a small boy, you can’t do anything. Go out, bastard!” Malema also accused the gathered media of being obsessed with him and so desperate to sell newspapers they were willing to write anything. He asked security to remove the journalist.

He also accused the journalists of treating him the way white people used to treat blacks, saying: “Don’t come here with that white tendency!”

Yusuf Abramjee, chairperson of the National Press Club, said such behaviour against the media is unacceptable in a democratic country where media freedom is part of the Constitution. “The media has a job to do and we will not sit back and watch our colleagues being abused. This is a very unfortunate event and the National Press Club is shocked by this.”

Abramjee recalled the words of President Zuma in his acceptance speech at the club’s Newsmaker award a few weeks ago that media freedom is part of the promotion of a vibrant debate within the country. Zuma said in his speech “we celebrate the freedom of the media which is enshrined in our Constitution, which allows the media to report on almost anything they wish to, within the ambit of the law.”

Abramjee said something would have to be done. “We cannot sit back and watch a journalist being manhandled.”

He also called on all journalists not to sit back and watch their colleagues being abused – saying that everyone should have walked out in solidarity with the BBC reporter.

“Journalists need to stick together. It is entirely appropriate to walk out should a news conference degenerate into a shouting match and should journalists be sworn at and insulted.

“This is not the first time that Malema has chosen to attack journalists and it appears to have become a trend in the past few weeks.”

The National Press Club re-iterates its statement of a few weeks ago – where it called on all the name calling to end.

And here, in full and uncorrected for grammatical errors, is what the ANC Youth League responded on the same day.

In the process answering to questions, a white guy, whom we later discovered is a reporter from the British Broadcasting Corporation (BBC) interjected when we were expressing the disgust over the fact that the MDC is throwing insults at the ANC Youth League leadership from air-conditioned offices in Sandton, whilst the masses are on the ground in Zimbabwe. He, in a very scornful way responded saying that “but you stay in Sandton”. We responded by saying that he should respect the reality that we were at the Head Office of the ANC, not Newsroom, where he can speak as he wishes.

In the process of clarifying such a reality, the Journalist said we are speaking nonsense and rubbish repeatedly, and we then got agitated to say all the things we have said about the Journalist, including that he is an “agent”, but emphasising that he should leave the Press Conference. In the subsequent intervention, we highlighted to all Journalists present that we are not undermining press freedom, but expressed disgust over the fact that the Journalist disrespected our proceedings.

That explains it, then.

No “disrespectedness” to the most august ANC Youth League, but we as journalists would like to draw attention, once again, to the fact that Julius Malema lives in Sandton, the very place from which Zimbabwean opposition party MDC ‘hurls insults at all and sundry’, but especially at glorious heroes of the proletarian revolution. In the interests of fairness, we would also like to invite readers to explain what the Youth League means by the above statement. Are we missing something here? Is this an ancient mystical language of deep insight and sacred wisdom that we’re too impure to understand? Is there a code that our intelligence services are too backward to decipher?

The prize for the most convincing answer is four days accommodation and an all-expenses-paid spa treatment at an exclusive resort on the Western Cape coast. We’re hoping that Julius and his entourage will be there too, and that he’ll recognise a kindred spirit in you, and pay for more treatments in the spa and maybe for a round of golf and a few piña coladas at the ladies’ bar. We’re also hoping that Luthuli House will foot the bill for the accommodation and the spa treatments, because in you they will have found someone who can finally explain what their little prince wants when he throws his tantrums, and because we really can’t afford the prize anyway, although we really do wish the best for everyone.

Here’s another paragraph from the Youth League press release to help you. Good luck!

We are not remorseful on our stance and will never be remorseful about disrespectful Journalists; particularly from countries whose media always undermine the credibility and integrity of African leaders. Our doors are however open for engagement with the Journalist if he intends to render an apology and we will from there decide what will happen. We will forever remain as defenders of free speech and media freedom, but these should be expressed within certain confines, such as respecting our space.

Photo: BBC reporter Jonah Fisher (C) is thrown out from a news conference after he interrupted Julius Malema, leader of the ruling African National Congress Youth League (ANCYL), at ANCYL headquarters in Johannesburg April 8, 2010. The firebrand youth leader of South Africa’s ruling party made clear he would not be hushed on Thursday, demanding Zimbabwe-style land seizures from white farmers and promising to keep singing a controversial song. REUTERS/Peter Andrews