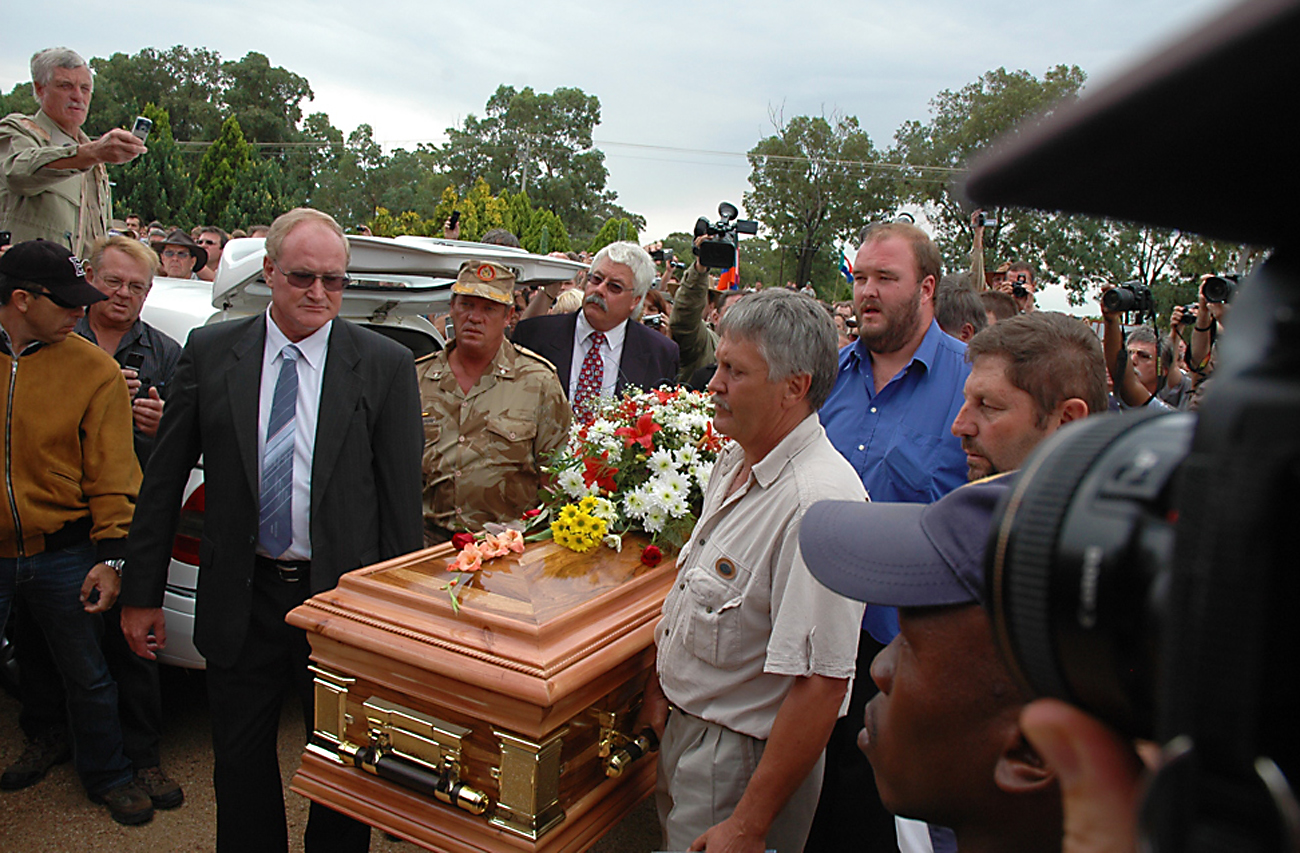 Ventersdorp was overrun by those wishing to attend the funeral of AWB leader Eugene Terre'Blanche. Some cried. Some sang along to various blaring renditions of the "De La Rey" song. Many displayed old SA and Vierkleur flags, and some the swastika.

It’s hard to judge how the mood may turn later in the day, especially if the beer comes out. But as of the end of the funeral service of murdered AWB leader Eugene Terre’Blanche there had been no sign of trouble between white and black in Ventersdorp.

That may be because the black community has not exactly been in plain sight. In the area around the church where thousands of mourners gathered the only black faces were peering out from behind cameras.

Though the AWB kept to its promise and made no political speeches and displayed no slogans at the funeral, visitors from other parts didn’t feel themselves similarly bound. The old SA flag was common, as was die Vierkleur. Most controversially – and definitely noticed by the foreign media – were a couple of instances of the swastika. Earlier in the day the AWB confirmed the appointment of Steyn van Ronge as the successor to Terre’Blanche, about which there had been some unhappiness within the ranks. The leadership of the movement also confirmed – via Andre Visagie, the secretary-general who is more respected than Van Ronge in the furthest right parts of the far right – it is policy of “peace for now”.

“We are saying there should be no violence, no revenge attacks, until we have had negotiations with the government,” Visagie said. Asked what would happen if those negotiations (aimed at securing a white, Afrikaans homeland within the borders of South Africa) failed, he would say only that the movement would gather its members to get consensus. A dog and a guard stand next to a poster of  Eugene Terre’Blanche before his funeral outside his farm in Ventersdorp in South Africa’s North West Province April 9, 2010. REUTERS/Siphiwe Sibeko

Visagie echoed many policy statements we’ve been hearing over the last week: self-defence for farmers, a call on government to halt farm murders, the assertion that the killing of Terre’Blanche was political. But also the confirmation that the AWB is happy with the police investigation under way into the murder. That is theoretical, however. Among the mourners gathered outside the church conspiracy theories and wild talk multiplied before the service, and continued afterwards. How those individuals act on their beliefs and fears will determine what happens in Ventersdorp – and elsewhere in the country – this weekend.