A new Start: Obama and Medvedev sign a landmark nuclear treaty in Prague 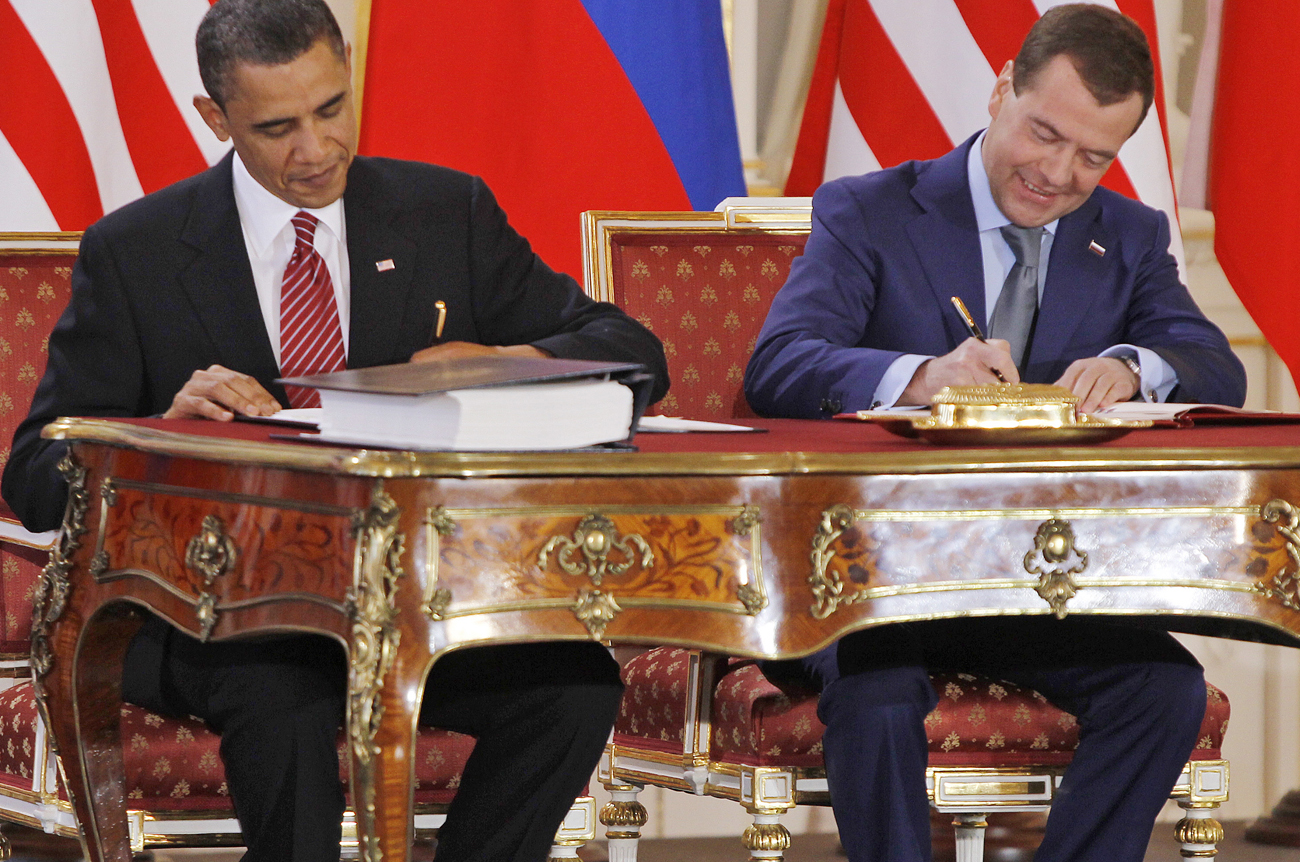 On Thursday, the American and Russian presidents signed the most important nuclear arms treaty in a generation – and then used that moment to warn Iran about its possible nuclear plans.

The Strategic Arms Reduction Treaty II (Start II) represents a hugely symbolic moment; a fresh start for US-Russia negotiations and greater cooperation and a signal to the rest of the world that disarmament is more than just a noble, but unobtainable goal.

Start II commits both nations to cut strategic nuclear warheads by one-third and the number of missiles, submarines and bombers carrying them by more than 50%. It limits each country to 1,550 nuclear warheads over seven years, as opposed to the 2,200 currently allowed. Nonetheless, lest anyone worry the two nations will be bereft of enough nuclear power to really do some damage, the US and Russia will still have enough atomic weaponry to destroy each other several times over – meaning there is clearly some room for further cuts.

Watch: Obama and Medvedev speak on arms cuts deal after signing in Prague.

However, the treaty does set a goal of further reductions – something both sides are pursuing for future agreements.

As the two leaders signed the pact, US President Barack Obama said, “It sends a signal around the world that the US and Russia are prepared to once again take leadership.” And Russian President Dmitry Medvedev replied, “The entire world community has won.”

During the signing ceremony, both men used the moment to send a joint warning to Iran’s leaders over their uranium enrichment programme that they insist is for peaceful purposes – even as evidence points the other way. The US, Russia, Britain, France, Germany – and now China – are part of talks in New York about a fourth set of UN sanctions to push Iran into open compliance on this issue. Concerning this issue, Medvedev offered, “We cannot turn a blind eye to this,” although he did say Russia favours the kind of “smart” sanctions that can change leaders’ behaviour. Russia’s deputy foreign minister Sergei Ryabkov added that Russia would not endorse a total embargo on refined petroleum to Iran.

Though signed, the Russian legislature and the US Senate must still approve Start II.  While getting the Senate to approve it in its role to “advise and consent” could be difficult, Obama says he is “confident that we are going to be able to get it ratified,” as a sign of the bipartisanship that has, heretofore, been sorely lacking. Sixty-seven votes will be needed to confirm the treaty. That’s eight more than the Democrats can count on from their caucus if all vote in favour of it.

US officials added that the new treaty is a key element in their goal of “re-setting” US-Russian relations – especially cooperation from Russia in dealing with Iran’s nuclear ambitions and North Korea’s atomic arsenal as well. Relations between the two nations are now clearly in much better shape than they were at the end of the Bush administration when bilateral ties suffered from, among other things, the after-effects of the 2008 war between Russia and Georgia.

Start II is part of a larger re-calibration of American nuclear strategy. A few days earlier, the Obama administration signalled a major shift in nuclear weapons policies by calling the acquisition of atomic arms by terrorists or rogue states more of a threat than the old Cold War balance of mutually assured destruction.

In coming weeks the US will be initiating a number of other nuclear weapons reduction efforts. First will be a gathering of more than 40 world leaders in Washington next week to discuss better security of nuclear materials. Then, in May, the US also plans to make a push at a UN conference on how best to strengthen the Nuclear Non-proliferation Treaty as well.

At least it’s a start.