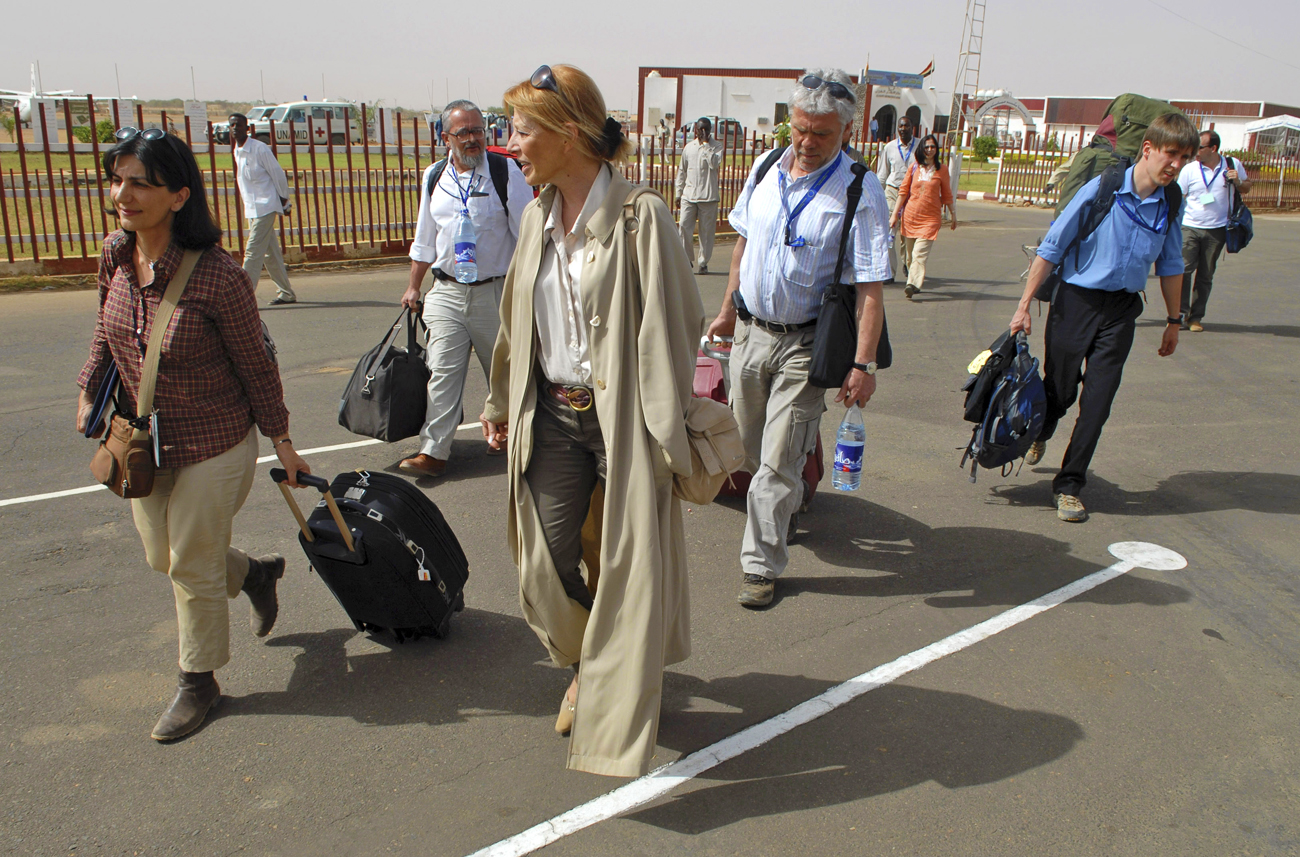 The EU has withdrawn its election observers from Sudan’s Darfur province, days before the country’s first multiparty elections in 24 years. The Europeans say it’s not possible to observe elections there in a credible way given the many safety limitations. Sudanese President Omar al-Bashir recently said the war in Darfur was over. That came as he signed a ceasefire with one of Darfur’s biggest rebel groups, only for it to be broken weeks later. Another large rebel group said the government subsequently attacked it with troops, helicopter gunships and Russian MiG jets. Meanwhile, south Sudan’s main party, the Sudan People’s Liberation Movement, has effectively said it’ll boycott the poll, citing fraud and security fears. Several other parties have also withdrawn from the elections or are threatening to do so. But there’s more trouble ahead after south Sudan’s President Salva Kiir said the northern Arab government in Khartoum was delaying demarcating the north-south border to try to retain control over the country’s oil reserves. Sudan’s oil wells are mostly in the southern part of the country, and helped fuel a 22-year civil war between the black African SPLM and the northern National Congress Party which ended with a 2005 peace deal. Under the deal south Sudan is supposed to receive about 50% of government oil revenues, which accounts for nearly its entire budget. But all the bickering currently going on is over pretty much the same issues that caused the country to descend into civil war in the first place.

Egyptian police broke up a pro-democracy rally in Cairo, beating and arresting protestors outside the upper house of Parliament — and later releasing them. The demonstrators want the former head of the UN nuclear watchdog, Mohamed ElBaradei, to stand for president in next year’s elections, and called for changes to the constitution that will allow him to do so. ElBaradei says he’s willing to stand against President Hosni Mubarak, but he’s effectively barred from running as Egyptian law permits only candidates who have one year’s membership of a political party that’s been around for five years. ElBaradei wasn’t at the demonstration, which is prohibited under the country’s emergency laws. But he’s already been sailing into the wind.

Not long after Somalia’s biggest radical Islamist movement al-Shabaab claimed to have joined al-Qaeda’s global jihad, 12 al-Qaeda members have crossed from Yemen into Somalia, according to Reuters quoting a senior Somali official. The weak UN-backed moderate Islamist government holds just a few blocks of the capital, Mogadishu, backed by some 5,000 African Union peacekeepers. It’s been threatening to launch a major offensive against al-Shabaab, which controls much of southern and central Somalia, but so far little has come of it. Now, a smaller militant group called Hizbul Islam has also expressed its loyalty to al-Qaeda. Hizbul Islam is both allied to and fighting with al-Shabaab, giving a glimpse into the chaos that pervades the anarchic country. The Somali government believes al-Qaeda is assessing whether it can move its Yemeni training bases to southern Somalia, after the US put pressure on Yemen over the wars in Afghanistan and Iraq. This adds a whole new dimension to the war on terror.

Nigeria’s Acting President Goodluck Jonathan has sacked the head of the national oil company, Mohammed Barkindo, at the same time as he appointed 38 new ministers to the country’s cabinet. Barkindo will be replaced by Shehu Ladan, who himself was dismissed from the state-run firm by President Umaru Yar’Adua before he fell ill last November. Yar’Adua’s four-month absence with heart problems has caused ructions in Nigeria’s political landscape. Jonathan was controversially awarded executive powers by parliament recently, but that sparked a series of court cases over the constitutionality of the move. While the Nigerian National Petroleum Corp. is seen as highly corrupt and inefficient, Jonathan’s appointment of Ladan has been interpreted as an overtly political act. The country has elections next year and, according to political tradition, the post of president should continue to be in the hands of a northern Muslim such as Yar’Adua, and not be taken by a southern Christian such as Jonathan.

The UN says it needs an extra $133 million to tackle food shortages and malnutrition in Niger, months after the army overthrew former President Mamadou Tandja. The new military government immediately appealed for international help over the crisis, after Tandja’s government made it clear that it was an offence to discuss the looming famine. Nearly 8 million people, or 60% of the population, are running out of food after poor rains caused crops to fail. The UN expects more than 1.5 million children under five to suffer malnutrition in the next year, along with tens of thousands of pregnant and lactating women. Food shortages are said to have already driven hordes of people into towns and neighbouring countries, which are facing food shortages of their own. Meanwhile, Niger authorities are cracking down on crime, which has shot up as access to food has declined, although some say this is a tactic for the junta to consolidate its power.