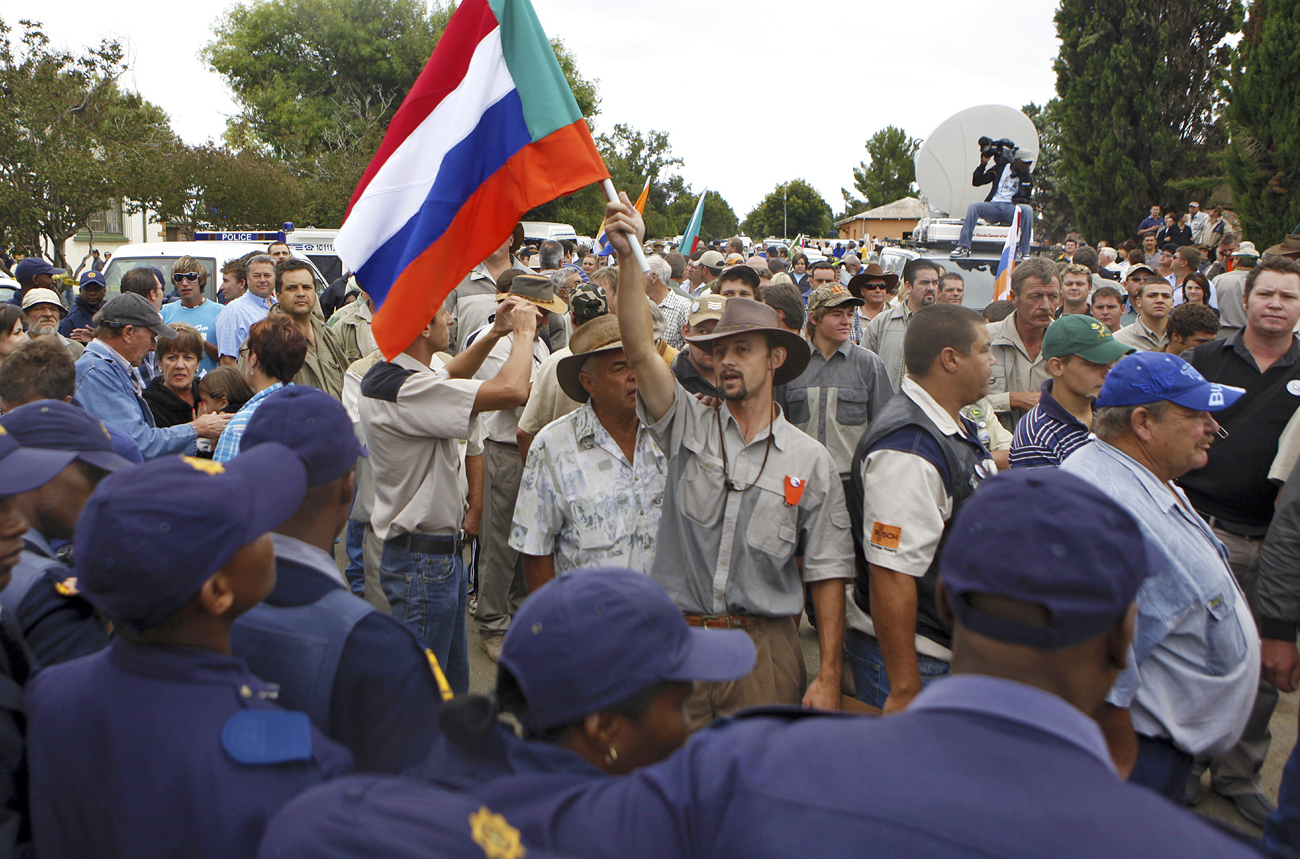 While the nation watched on Tuesday and hoped the streets of Ventersdorp would not erupt in racial violence, another serious and sombre affair was taking place inside the magistrate's court. Here's what happened.

It is always deeply disturbing to see young blonde, blue-eyed children holding up flags with three sevens on them, you know, in a pattern resembling the Nazi swastika. It points to a cult of personality and all the evil things that come with that. But what’s really worrying is when young men come from as far away as Boksburg, when they have no previous links to organisations such as the Afrikaner Weerstandsbeweging, and want to join up. It’s the alienated, the ones who feel dispossessed and forgotten, who think the current world offers them nothing they need worry about. You’ve seen them – the angry ones.

And in a way that’s really what Ventersdorp has been all about ever since Eugene Terre’Blanche was hacked to death. Anger. It’s the emotion that’s driven by fear; that devil that drives all the really sad societies and lets bad politicians triumph.

There was plenty of that on display on Tuesday. But what matters now is that this situation has to be managed properly. Not just properly, but also deftly and professionally. Which is why, when Menzi Simelane first said the entire trial would be held in camera, i.e. without the media or any members of the public, we were really worried. It was because of the new Child Justice Act, he said. It means that because one of the accused is a minor, no one will get to see justice being done in this case. And with a load of khaki-clad anger out there, you can imagine the consequences if these guys get cut off. Photo: Supporters chant slogans after seeing one of two suspects in the murder of Eugene Terre’Blanche led by police from the court on 6 April 2010. REUTERS/Siphiwe Sibeko

But Simelane was adamant, “That’s the law,” he said. Well, being of a cynical frame of mind, we thought we’d check. And yes, he is right. As the child law expert we spoke to explained it to us, it’s about the rights of the minor, the accused and the state. Look at it this way. If you have two accused in a trial, one of the fundamental things you want to do as the prosecution is have them both in the same court room. That way you can test their evidence against each other. If you have to separate them, you lose that major way of working out whose story is true. Quad erat demonstrandum, the two stay together, and the whole thing is behind closed doors.

But hell, we still think that could lead to trouble. We’re prepared to let Simelane off the hook this once, but we’re still worried.

We’re also a little bemused about why Simelane was there in the first place. His is not a figure to engender much comfort. And he made a hash of his first press appearance on the court step (and there’s only one step outside the Ventersdorp magistrates’ court). He asked for questions. Well, came the sarcastic reply (sorry, yes, we’ll ‘fess up, it was your trusty grumpy reporter) “Why don’t you start by telling us what happened, genius”. Okay, we didn’t say “genius”. Then there was the fun and games over trying to work out what had actually happened. In the end, your grumpy correspondent put it thus, “We need it in a soundbite so tell us who’s been charged and with what”. That drew a laugh at least, and out it came.

It’s actually more complicated than we thought, but here goes: They both face the same charges. Murder, obviously. Robbery, because they allegedly stole a cellphone from a trouser pocket. Attempted robbery; apparently they tried, but failed to make off with Terre’Blanche’s car, and crimen injuria. That’s right, read it again if you have to. It gets a little icky, but there you are.

Then there’s the kind of unfortunate detail that will give this story some real juice: The prosecution will “aver that after he was killed they pulled his pants down and revealed his private parts”.

From here, well, we don’t have a timeline, except that the two accused will appear again next week. And from there, the trial could stay in Ventersdorp, or move to a higher court. We think that means a trip all the way to Mafikeng, but that hasn’t been confirmed.

A word on the legal guys who’ll actually be leading this: Simelane has brought in a heavy hitter, George Baloyi, as prosecutor. He was on the Zuma prosecuting team at one point, and is one of those guys who wouldn’t forget a face. He’s quick with a handshake and a laugh, and comes across as an all-round good bloke.

On defence side, Zola Majavu is an interesting kettle of fish. He’s a “celebrity lawyer” to an extent and will represent the 15-year old. If you follow domestic football, you’ll know him as the PSL prosecutor. He won’t say who asked him to come here, but that he is doing it for free. Hmm, ja, right. There’s nothing like this case for media exposure Majavu, and we weren’t born yesterday. He did respond quickly to the question about whether our friends in the Youth League (who’ve gone relatively quiet of late, and, yes, Julius is in the country) were sponsoring him with a cheerful, “No, let me put that to bed. It’s nothing to do with them”.

The other accused will have to make do with a legal aid lawyer, poor chap.

For now, legally speaking at least, this story goes quiet. The focus moves to the funeral, and how many people will come and what will they do there. But this is really a political story, so it won’t be long before something happens that sparks it again.