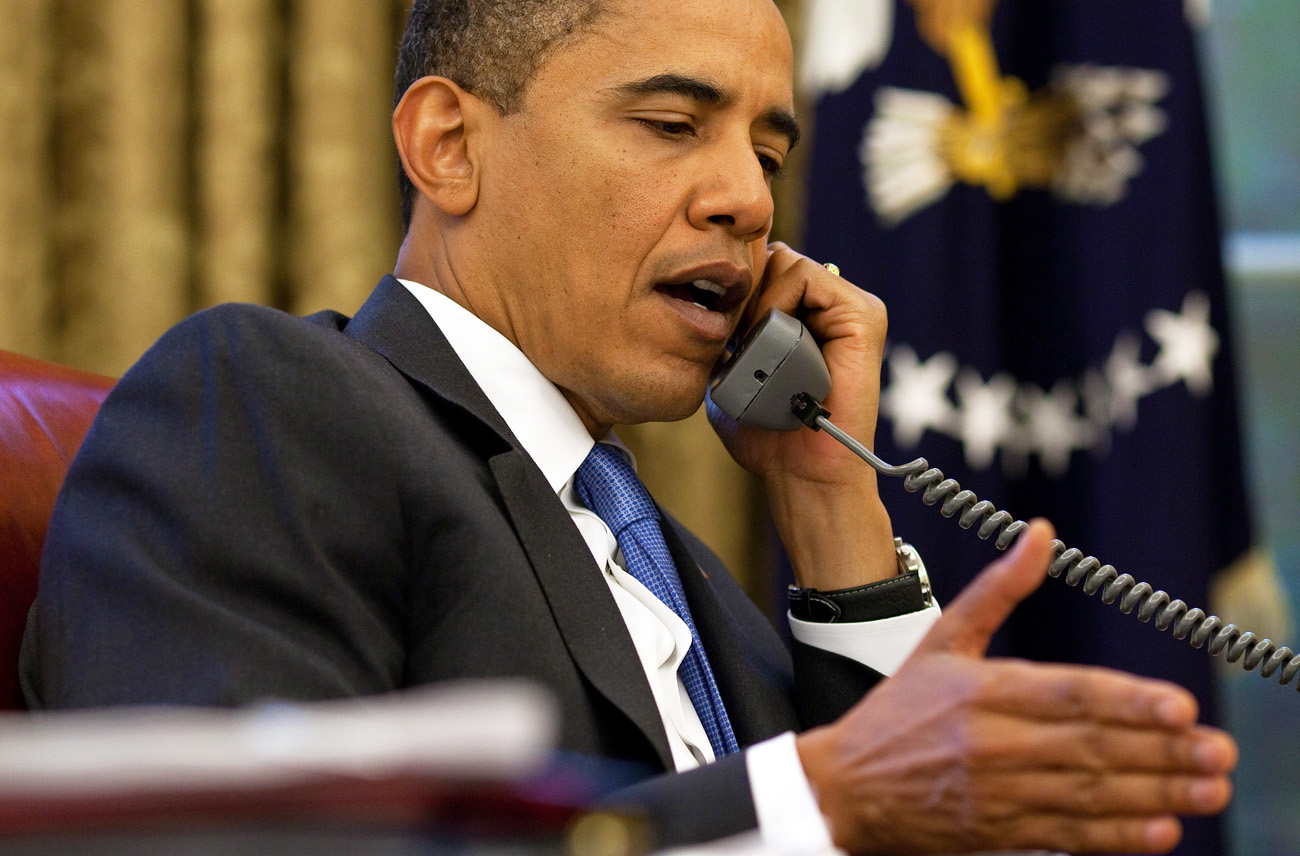 The White House of US President Barack Obama now calls the spread of nuclear weapons to rogue states (read North Korea and Iran) and possibly terrorists worse threats than the nuclear apocalypse that loomed over the world during the Cold War. But Obama still wants to halt development of new nuclear warheads by traditional foes and will this week sign a new arms-reduction agreement in Prague for greater reductions in American and Russian nuclear arsenals. Obama’s administration has shifted the circumstances in which the US might launch a nuclear strike. As a measure of where Obama perceives the new threat to be, leaders from more than 40 countries will meet in Washington next week to discuss better safeguards against terrorists acquiring atomic bombs. Photo: White House stream.

The Vatican says accusations that Pope Benedict XVI helped cover up sexual abuse in the Roman Catholic Church are part of a “hate” campaign that targets the pope for his opposition to abortion and same-sex marriage. Hmm, that’s a pretty heated response from Rome, which smacks of paranoia and a misplaced sense of victimisation. Vatican media carried the comments by senior cardinals explaining “the motive for these attacks”. It’s all sounding highly reactionary, pseudo-police-like, and pre-empts any proper legal investigation of alleged widespread sexual abuse in the Catholic Church. That’s coming, though, in multiple lawsuits, one of which in the US will seek to have the pope himself testify. The cardinals profess the so-called hate campaign derives from powerful lobbies that would like to impose a completely different agenda on the world than the sanctity of marriage between man and woman. That sounds like the all-powerful Church is going way off topic.

The New York Times says the fate of Eskom’s coal-fired power station project in Limpopo might rest on a possible $3.75 billion loan. Already the wording sounds less than hopeful that the energy-challenged utility will receive a sympathetic hearing when the World Bank votes on the loan to help build the world’s seventh-largest coal plant. But despite the fact that the giant plant will emit massive quantities of carbon dioxide, the World Bank’s largest shareholder, the US, has to engage in a balancing act between actively fomenting climate change and finding ways of meeting the energy needs of developing nations that rely on international financial institutions. Construction of the plant is already well under way, despite objections by environmentalist groups. Treasury department officials have been heard to say the decision to grant the loan is going to be challenging. It will be the first loan South Africa has sought from the World Bank since apartheid ended in 1994. And that’s exactly why Eskom is in this unfortunate position in the first place. It seems Marxist political dogma has trumped practical good sense for the past 16 years. Viva Eskom, Viva.

In actions that evoke memories of Mahatma Gandhi, former senior Palestinian guerrillas are joining unarmed protest marches against Israeli policies and are allowing themselves to be arrested. Produce from Israeli settlements is being burned in public demonstrations and the Palestinian Prime Minister Salam Fayyad is planting trees in West Bank areas under Israeli jurisdiction, claiming the land as part of a future Palestinian state. It seems that new struggle tactics are taking hold in the West Bank, after diplomacy and armed struggle failed to end the Israeli occupation. The idea of passive resistance is now part of popular resistance and includes a campaign to end Palestinians buying Israeli settlers’ goods and Palestinians being employed by settlers in their industries. It’s not only Palestinians who promote this resistance – some Israelis do too. There’re shades of the South African liberation struggle here.

A report in the Los Angeles Times says the administration of President Barack Obama has authorised the killing of radical American Muslim cleric, Anwar al-Awlaki, who’s thought to be hiding out in Yemen. US intelligence has linked Al-Awlaki to the 9/11 attackers, the young Nigerian man accused of trying to blow up a Detroit-bound airliner on Christmas Day and a Muslim US Army psychiatrist accused of randomly killing 13 people late last year at Fort Hood in Texas. The US doesn’t have a formal policy of assassinating its enemies, but that’s, of course, what frequently goes on. But it’s almost unprecedented for an American to be approved for targeted killing, the newspaper quotes US officials as saying.

Antiquities’ conference to ask for return of relics

The worlds’ cultural officials (whoever they might be) are to meet to discuss how to recover stolen artefacts which are on display in other countries. There was a lot of that going on during colonial times, with Egypt featuring prominently among the dispossessed. Now 16 countries will take part in a two-day conference in Cairo that’s been organised by Egypt’s Supreme Council of Antiquities, which wants many priceless items returned by Western museums. Greece, Italy and China, all of which have lost ancient treasures over the centuries, also want their relics returned. They’ll present wish-lists and make clear their demands to museums overseas. But there’s likely to be strong responses from US and European collectors. Relics such as the Elgin Marbles from Greece have been the subject of long debate. As it stands, and for reasons as complex as those that led up to their theft in the first place, they’re not going anywhere fast.