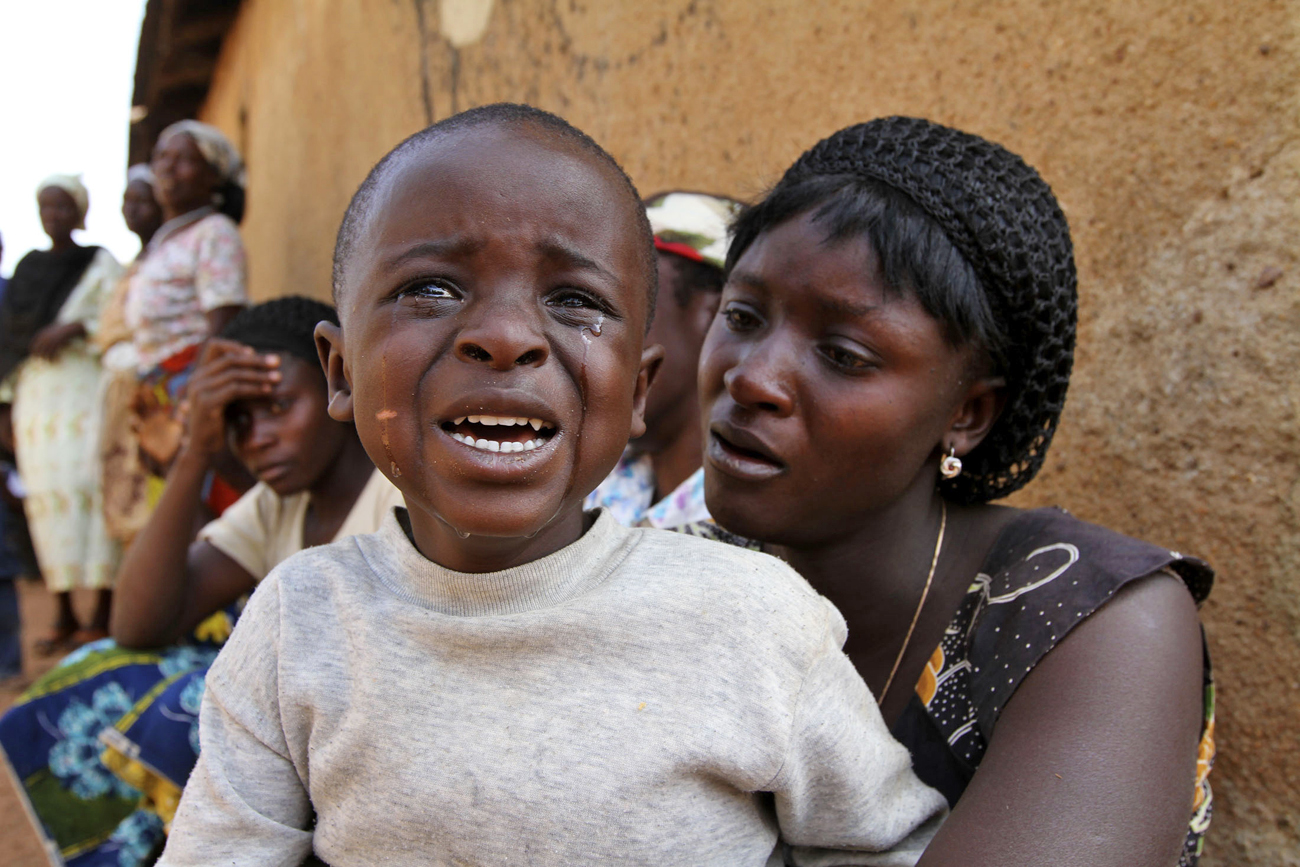 Three people have been killed in clashes between Christians and Muslims in the central Nigerian city of Jos, where hundreds died in similar violence earlier this year. Nigeria’s military placed a curfew on much of Plateau State in January, when sectarian violence killed more than 400 people. But retaliatory attacks on mostly Christian villages near the city, in which hundreds more were killed, showed the lingering depth of the violence. Observers say competition for land between local Christian and animist groups, and Muslim settlers from the north, is responsible for more than a decade of bloody unrest in the region.

Photo: A boy sitting with his mother cries during a funeral for people killed in religious attacks in the Dogo Nahawa village, about 15 km (9 miles) to the capital city of Jos in central Nigeria, March 8, 2010. Soldiers patrolled the central Nigerian city of Jos on Monday and aid workers tried to assess the death toll after attacks on outlying communities in which several hundred people were feared to have been killed. REUTERS/Akintunde Akinleye

Nigeria’s Acting President Goodluck Jonathan has installed a new cabinet, ending months of political uncertainty stemming from the long absence of President Umaru Yar’Adua, who’s ill with heart problems. Jonathan assigned portfolios to 38 new cabinet ministers, but will take charge of the power ministry himself for now so that government can achieve targets set in the crucial electricity-generating sector. Observers hope Jonathan can now assert his authority and revive stalled government reforms, after Nigeria’s parliament controversially handed him power in February. This includes cementing peace deals with rebels in the oil-producing Niger Delta, which had started to unravel in past months. It’s been a long and bumpy ride for Nigerian governance since Yar’Adua disappeared from public view last November. Only 13 months remain of the current presidential term, and the US government – which buys vast quantities of Nigerian oil – wants the head of Nigeria’s election commission replaced ahead of new polls due in 2011, after the country’s last poll in 2007 was plagued by ballot-stuffing and voter intimidation.

The Common Market for Eastern and Southern Africa will finalise an internal investment agreement by August that will standardise treatment of investors across member countries, according to Reuters. Comesa is a 19-country bloc, including oil- and gas-rich Libya and the mineral-rich Democratic Republic of Congo. Africa has some 30 regional trade arrangements, but the continent receives less than 4% of global foreign direct investment, partly because bureaucratic red tape hampers business. Under the new vision for Comesa, an investor from anywhere in the bloc will be treated by the same set of rules. Sounds great. Now prove it.

A South Korean navy vessel has caught up with an oil-laden supertanker hijacked by Somali pirates in the Indian Ocean while on its way from Iraq to the US. But there’s not much the warship can do except remain at a safe distance until the pirates make their demands. The 300,000-ton South Korean-operated tanker has 24 crew, and along with its cargo of crude worth tens of millions of dollars, authorities fear any sudden moves could jeopardise lives and potentially cause an ecological catastrophe. The South Korean navy destroyer was already on duty in the Gulf of Aden, some 1,500km from where the hijacking took place. The vital shipping lane is patrolled by many of the world’s largest navies, after years of hijackings stemming from Somalia have garnered pirates millions of dollars in ransoms.

Seven Nigerians have each been sentenced to 12 years in an Equatorial Guinean prison for attacking the presidential palace in February 2009, while several Equatorial Guineans accused of participating in the attack were freed because of lack of evidence. Equatorial Guinea’s government said the attack involved Nigerian militants from the Movement for the Emancipation of the Niger Delta, but the group has denied this. Equatorial Guinea is the third largest oil exporter in sub-Saharan Africa and has a history of failed coups, including the attempt by British soldier of fortune Simon Mann and a group of South African mercenaries. The convicted Nigerians claimed they were on their way to Cameroon when their boat was driven off course in stormy waters and stopped by the Equatorial Guinean navy. A group then attacked the presidential palace in the capital, Malabo, but was defeated by the army. It’s the stuff of Hollywood.