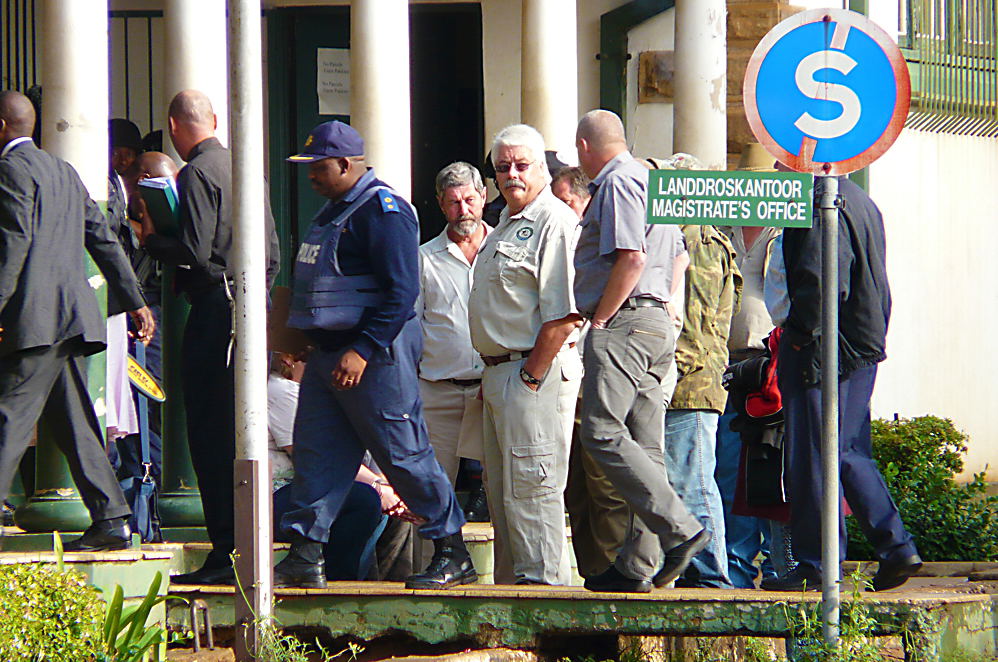 The court proceedings in connection with the murder of Eugene Terre'Blanche are still ongoing at the Ventersdorp magistrate's court. The real action, however, was outside the court.

One of the alleged murderers, being only 15 years old, falls under the new Child Justice Act that came in power on 1 April. A lawyer for the suspects has confirmed that he does not yet know if the case will be postponed today and when his clients will be able to apply for bail.

All the action, unfortunately, was outside court. The precarious calm was broken when the AWB section of the crowd started singing the old South African anthem, Die Stem.  The black section responded by singing the official South African national anthem, Nkosi Sikelel’ iAfrika, including the Afrikaans portion.

Then, seemingly out of nowhere, a white woman threw water at the group of black people. Immediately a scuffle broke out, only to be brought under control by the police who formed a single- and then a double-line barrier between the two factions. Following the police’s action, the scuffles expanded across an open field in front of the court. Police reacted by attempting to deploy barbed wire, walking behind a Nyala vehicle. The police vehicle promptly got stuck in mud. This prompted AWB supporters, ever the proud off-roaders, to start taunting the police for their poor mud-handling skills – all rather humorously.

As the police were trying to free their Nyala, they left a gap in their cordon, but were able to plug it before any AWB supporters could break the line. No actual contact was made between black and white groups. At that moment, AWB leaders, including spokesman Pieter Steyn, stepped in calling for respect for Terre’Blanche’s family, and calm was quickly restored.

As we write this, there are still small crowds milling about, but, on the whole, Ventersdorp is peaceful, but tense. There’s unconfirmed talk that AWB supporters may gather later again.

We will be updating you as events happen.

The first appearance of the two men accused of killing Afrikaaner Weerstandsbeweging leader Eugene Terre’Blanche started peacefully today. Outside the court, several hundred right-wing supporters gathered – with flags and slogans, despite a request to the contrary by the AWB. Luckily, everyone else stayed away.

About 50 police, barbed wire and vehicles stood between spectators and the Ventersdorp magistrate’s court this morning, but they acted largely as a symbolic barrier, with nobody challenging the line. Supporters of the AWB and related organisations made up the majority of those gathered around the court – just. The police presence was unusually strong, with even a police helicopter making an occasional swing around the town. A small group of black onlookers gathered just metres down from where the Afrikaners made their encampment, but the groups didn’t mix, largely didn’t talk and generally stood around quietly. There was no evidence of organised appearances by the likes of the ANC Youth League, and only half a dozen ANC T-shirts on display.

Because one of the accused is apparently 15 years old the hearing will be held in camera. Authorities seem to be making an effort to keep the AWB and related groups in the loop, however, so details on the outcome (of what should be a short hearing) are expected later on Tuesday. Photo: Many road signs between Ventersdorp and Potchefstroom have been vandalised. “AWB” and “kill Malema” in red spray paint.