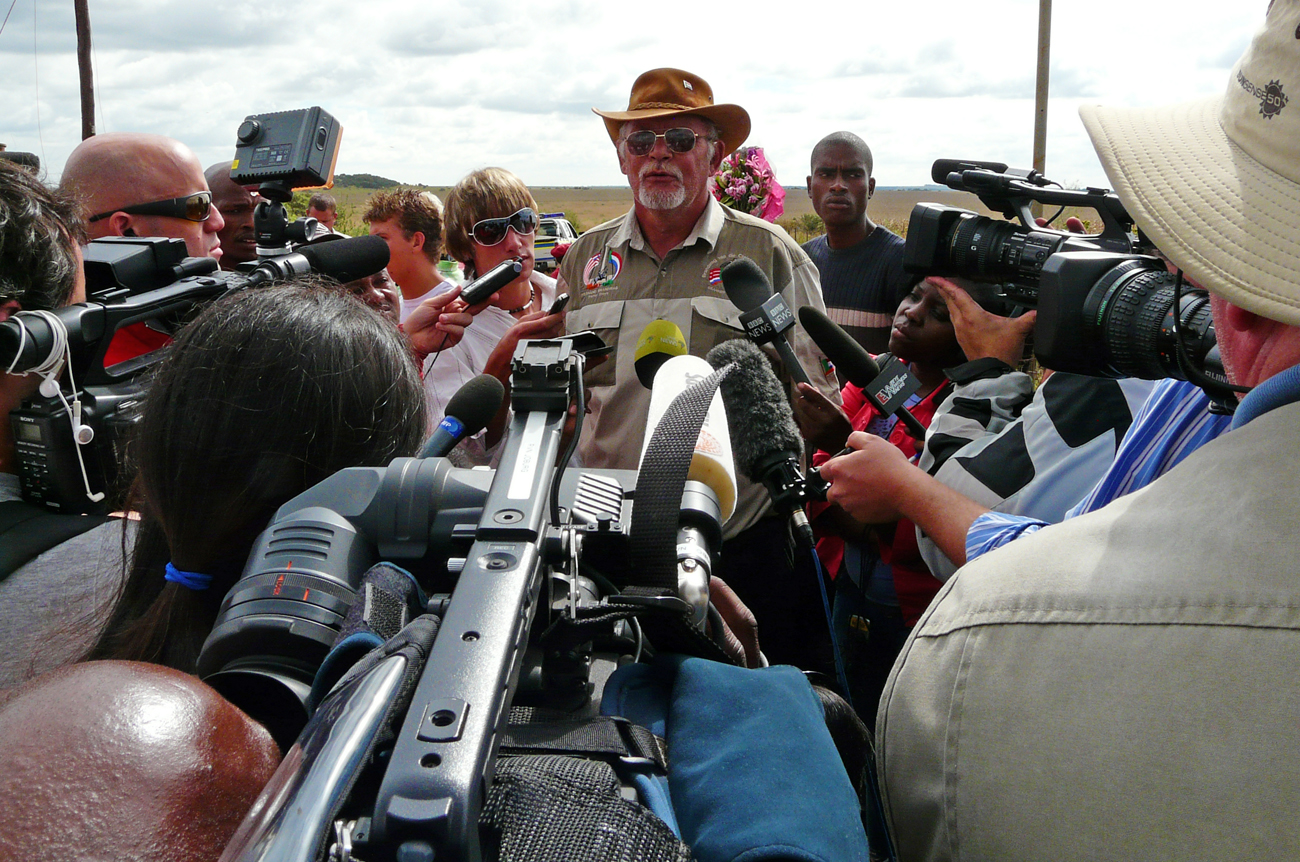 Around 200 AWB supporters gathered in Ventersdorp to mourn the death of Eugene Terre’Blanche on Monday. While there was some wild talk, the call from the rank and file was for calm, considered action. The wild rhetoric was left to Cope leader Mosiuoa Lekota – who had nothing kind to say about the ANC or Jacob Zuma.

Members of the Afrikaaner Weerstandsbeweging have been asked to wear suits to the funeral of murdered leader Eugene Terre’Blanche on Friday. No flags, no guns, no protest marches.

“Even when [the murder accused] appear in court tomorrow, we don’t want any slogans,” says Pieter Steyn, the spokesman for the movement. “We don’t want any revenge attacks or anything.” That was apparently the message given to a small gathering of supporters in Venterdorp; the media were excluded from it because, Steyn said, the AWB didn’t want angry supporters to say things they didn’t mean or make inflammatory statements.

By early Monday afternoon, the most inflammatory statements had come from Cope president Mosiuoa Lekota, who visited the immediate family of Terre’Blanche before laying flowers at the gate to his farm, where an impromptu memorial has sprung up. “If the ruling party continues on this path, then any disaster will be on their heads,” he said when asked about the potential explosive situation in the country.

Lekota condemned the ANC in general and Jacob Zuma in particular for not taking action against Julius Malema’s “kill the boer” song.

“I may be an African, but I feel uneasy when I hear these songs, because I feel somewhere somebody is encouraging young people to do these things… The government should take actions against anybody who says you must kill, even if it is in a song.” Photo: Lekota didn’t have anything nice to say about the ANC and President Zuma

To which a small group of white men, listening from the fringes after laying their own flowers at the farm gate, nodded appreciatively. “I’ve always said Lekota is okay,” one said to another, before they drove off.

At a media conference outside the farm gates later in the day, Steyn reiterated that statements made on Sunday about plans for marches and rallies and revenge were not reflective of AWB policy. Photo: An impromptu prayer at the farm.

“Our members are emotional and sad and very angry,” he said, adding that any rash statements were being withdrawn unconditionally. “It is against the policy of the AWB to take revenge or use violence.”

But he painted a picture of members who are increasingly hard to control in the face of ongoing farm attacks – not least of all that on Terre’Blanche – and hinted at dire consequences. His message to the President: “Mr Zuma, we will remain calm. Until the next farmer is murdered.” Photo: The farmhouse where Terre’Blanche lived and died. In the foreground are some of the horses in which he took great pride.

That kind of ominous overtone is what one would expect from the AWB, perhaps, as were the personal insults hurled at Julius Malema throughout (mostly that he needs a decent education before returning to politics.) But unexpected is the respect with which AWB officials are treating the police. Steyn said the movement was more than happy with the professional job investigators were doing, and that it was impressed by the commitments to fight crime of police minister Nathi Mthethwa and police chief Bheki Cele. The AWB says the nature of the murder and the brutality with which it was executed makes it a political crime, possibly one intended to send a message. Even so it intends to keep his funeral a civil affair, with no political rallying, and will then renew its call to the United Nations to help in the creation of a self-governing homeland for white, Afrikaans-speaking Christians.

Photos and video: The Daily Maverick, except when noted otherwise

Main photo: Pieter Steyn, spokesman for the AWB, at a media conference outside the gates of Eugene Terre’Blanche’s farm.