Mantashe vs Malema: a looming rupture 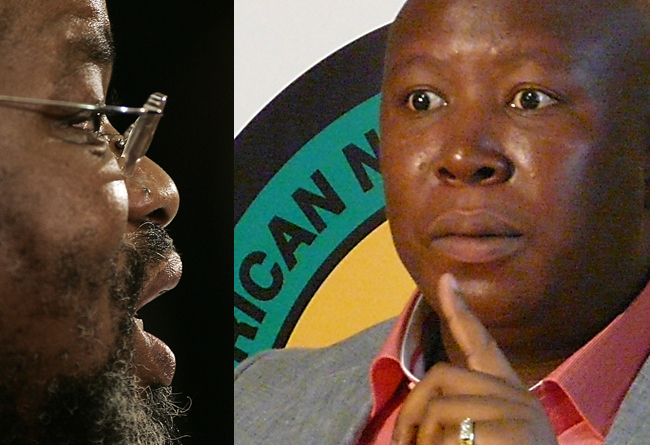 Despite the ANC’s repeated calls for unity in the ranks, the cracks are beginning to show more and more frequently. On the Kieno Kammies show on Talk Radio 702 this week, the breakdown in the relationship between Julius Malema and Gwede Mantashe was on full display.

“He is insulting the intelligence of African and black people, nobody has made it a headline.”

So said Julius Malema when he called into Kieno Kammies’s Talk Radio 702 show on Tuesday night. The ANC Youth League leader’s complaint was about Afrikaans singer-songwriter Steve Hofmeyr, who had written a bitter and borderline racist open letter after the ANC defended the youth leader’s right to sing the “shoot the boer” song.

Kammies was quick to hit back. “I tell you what I said about Steve Hofmeyr on Friday, Julius. I called him the Afrikaans Malema.”

“That’s what I called him. I take Steve Hofmeyr as seriously as I take you sometimes when you say some of the stuff you do.”

Malema had now had enough and raised his voice. “No, you are calling him the Afrikaner Malema because now you’ve got a target on the African National Congress…”

Kammies, butting in: “Ag man, get that chip off your shoulder.”

For the next ten seconds, three people were all talking past one another at the same time – the third was ANC secretary-general Gwede Mantashe, who was invited onto the show by Kammies.

Malema had the most resolve, though. “Why all along you’re never calling Steve Hofmeyr ‘Malema’ when he sang General De la Rey? You have never called him Malema or anything of that nature?”

Kammies: “I, I have taken Steve Hofmeyr on on a lot of things…but Gwede, ja?”

There was more shouting from the three, we heard Mantashe trying to say something and Kammies announcing that Malema had put the phone down. Finally, Mantashe spoke. “Eh, Julius, Julius. I’m going to ask Kieno to cut you off now.”

Too late. The Youth League leader had not bowed to the secretary-general of the party; Malema, once again, had done his own thing irrespective of the wishes of the ANC big-wigs.

It was an important interaction, a symbolic public conversation on a range of levels, and on Wednesday Talk Radio 702 played snippets from the show throughout the day. In a conversation with The Daily Maverick on Thursday, Kammies provided further background.

During the show, said Kammies, even though Mantashe was not in the studio, he could feel the man becoming increasingly agitated. Mantashe tolerated Malema to begin with, perhaps because the first thing the youth leader had stated when he called in was that the ANC had never had a better secretary-general – the word Kammies chose to describe Malema’s opening gambit was “grandstanding”.

But there were many moments that revealed the enmity between the two men. One was when Mantashe announced that a directive had been put out by the ANC that there was to be no infighting, and now that he (Mantashe) was being attacked, his “hands were tied”. Then there was the fact that Malema kept cutting in when Mantashe tried to make a point.

“[Malema] didn’t give Gwede a chance to respond,” said Kammies, “and in the end he put the phone down.”

Significantly, before Malema had called in, Kammies and Mantashe had been discussing the need for the ANC to clamp down on public utterances of the provocative “kill the boer” slogan. Mantashe had agreed with the presenter that the ANC had handled the issue badly; the secretary-general even indicated that he thought an on-air debate between the ANC and Afrikaner lobby group AfriForum was a good idea.

Of course, as The Daily Maverick discussed with Kammies, the historical divide between Mantashe and Malema may get in the way of that. Malema has stated on-the-record that he wants former Youth League president (and current deputy police minister) Fikile Mbalula to replace Mantashe as the party’s secretary-general – Malema and Mbalula are known to be loyal to one another’s causes, and it’s unlikely Malema would have risen to the Youth League’s top spot without his predecessor’s support. If Mbalula were to become secretary-general of the ANC, Malema would have the ear (and perhaps the mind and heart) of the party’s most powerful member.

“Malema often complains about Mantashe’s allegedly divided loyalties as ANC secretary-general and South African Communist Party chairman,” Jacob Dlamini wrote in the Business Day on Thursday. “But that is simply cover for what is essentially a grubby self-serving enrichment scheme intended to benefit Malema and a number of cronies. If successful, this scheme would destroy the ANC more than it would the state.”

It’s a scary hypothetical question to ask, and yet given that the ANC is arguably as divided now as it was in the final months of 2007, it can’t be avoided: what would a “destroyed” ANC mean for the rest of us?