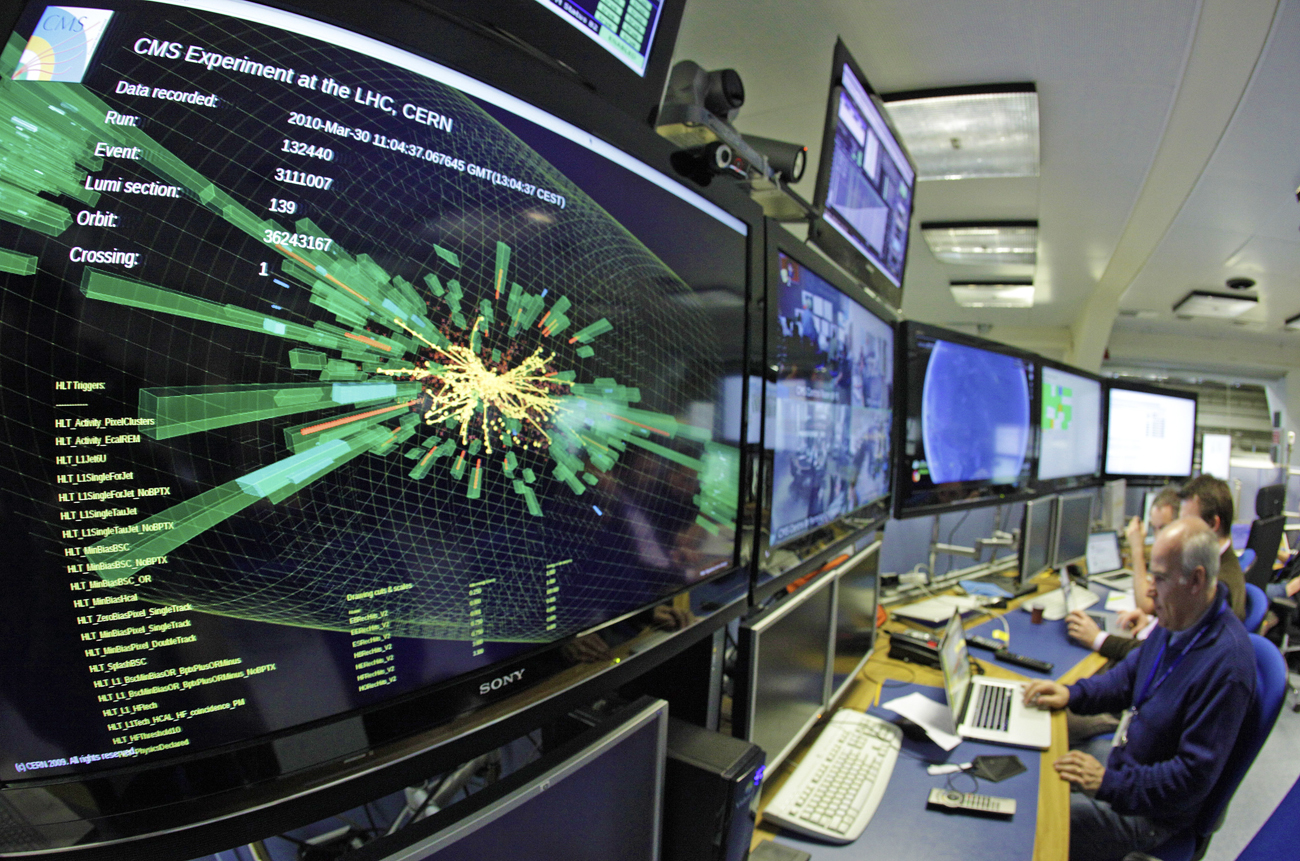 “…Stein turned to look at his top research assistant, Slithey Toves*, and marvelled – all those brains and beauty in one person. A marvel of evolution, for sure. Toves had written that masterful PhD about alternate states of matter, although he was glad he had talked her out of speculating on collapses into meta-vacuum states – it was pure science fiction, that bit. Really out of place in a sombre thesis on primordial proton formation in the first microseconds after the Big Bang. Stein, frequently called Dr Monster because of his fearsome reputation in the global physics community, every bit as much as his amazing, but entirely coincidental resemblance to Gene Wilder, turned his attention back to the banks of dials, readouts and touch-screen controls.

“This project had taken 16 years to create, two entire generations of science had been dedicated to it, the capital equivalent to the GDP of a mid-sized country had been consumed, and now he, Frank N Stein, PhD, FRS, LMNOP, was ready to rev it up and let rip. ‘Slithey, please watch that electricity consumption reading, I’m going to turn it on slowly.’ He added under his breath, ‘We’re about to steal the fire from the gods – move over Prometheus!’

“As he turned the key-lock, there was a faint hum, then a bit of an ozone smell, tinged ever so slightly with sulphur. He thought he saw auras around the control panel, the boundaries of things were growing fainter, smaller, the room was collapsing in on itself… ‘Slithey, quick cut the power feeds, the power fields, the grids, override the collider!’ It was too late, the universe was already collapsing to the size of a walnut shell and the lights everywhere were fading to a deep red …”

(*With apologies to Lewis Carroll, Mel Brooks, and Mary Shelley)

Bad science fiction? Of course. But in the decade and a half since the Large Hadron Collider (LHC) has been under construction, a chorus of critics have been muttering that it was a throwback to Prometheus stealing fire from the gods; that it was going to trigger the creation of a black hole in the Earth’s crust that would draw in the entire planet – and then begin consuming its way through the solar system. Or worse. Much worse.

The other day, this fantastic piece of equipment – actually a small town’s worth of research installations – finally began to smash subatomic particles into each other. After two bad starts because of some really bad electrical failures, the LHC has sent protons at 99% of the speed of light and at record-high levels of energy – 3.5 trillion electron volts each – racing around the LHC’s 27km underground magnetic circuit.

The result: A sub-atomic crash test measured by equipment inside an apartment block-sized building, specially constructed to note every flash and fragment from the miniscule-sized fireballs scientists say will offer real insights into the beginning of the universe. A whole generation of particle physicists has staked their all on hopes the LHC will open the curtains still obscuring the fundamental secrets of the universe – and how it came into being.

Thus, key tasks for the LHC are to tease out the identity of the mysterious dark matter that shapes the visible cosmos, as well as get a bead on that strange bit of the universe known as the Higgs Boson particle, sometimes called “the God particle”, thought to give all other sub-atomic particles their mass. Until now, the Higgs Boson, proven to exist mathematically, has been out of reach for researchers to find, to measure and to understand. That’s what the LHC was built to do.

At the California Institute of Technology, Nobel laureate David Politzer spoke to a gathering of some really bright people who had joined to follow the LHC’s start-up by remote conferencing. As the buzz began, Politzer said, simply, “We’re expecting some answers”. The refreshment table had, among other snacks, chips and dip, matzos and pizza, a nod to the global ecumenicalism of today’s big science.

Meanwhile, over in Japan, Rolf Heuer, director general of CERN, was also watching as the LHC was turned on. Heuer said the collider, “opens a new window of discovery and it brings, with patience, new knowledge of the universe and the microcosm. It shows what one can do in bringing forward knowledge. [And] it will also bring out an army of children and young people who will get into the private sector and academia.”

This great switch-on moment was not the LHC’s first time around the track, so to speak. But this success in smashing protons into each other on their sub-atomic luge tracks represents a remarkable return to the action for CERN. Even so, the LHC is only halfway back to where it wanted to be. A year-and-a-half ago, the first time they turned it on, they had a major explosion that filled a big part of its underground tunnel with super-cooled helium gas and soot when the electrical connection between two of the enormous magnets designed to steer the protons vaporised. Turns out it was caused by your basic substandard construction. Well, ask yourself, have you ever had a plumber or an electrician fix things 100% the first time around?

Further examination showed the LHC had thousands of these joints, and they had to be fixed. Oops. Accordingly, the LHC, originally designed to speed up the protons to 7 trillion electron volts and then to ram them together, can only be run safely at half power. Maybe that takes us back to those critics who mutter that if the whole thing was so badly built, can we be sure the scientists really know what they’re doing when they try to steal the gods’ fire? Hmmm.

Putting the very best possible face on things, CERN physicists now say that running the LHC at half power for a year-plus will give them enough data so they can catch up to their great rival, the trillion volt Tevatron at the Fermi National Accelerator Laboratory in Illinois. This Tevatron thingee is smaller, but it has been running for several years already, and it doesn’t seem to cause unplanned explosions.

Particle colliders are a tangible expression of Albert Einstein’s famous equation: E = mc² or, more plainly, there is a whole lot of energy locked inside any bit of matter. So, put the other way, the more energy these super colliders can cram into their little fireballs, the closer they can get to the Big Bang. There’s that fire from the gods thing again…

The first modern particle accelerator was the University of California at Berkeley’s machine, built in 1932. It was only a foot in diameter, but it still pushed protons to energies of 1.25 million electron volts. In the race to build bigger and bigger accelerators, the US planned a Superconducting Supercollider as a 87km-long 20 trillion volt machine in Texas, but Congress cancelled all the fun when its projected (not invoiced) cost hit $11 billion. At that point, CERN – a 20-nation consortium – stepped in to build its own big science toy. As plans stand now, it is still going to take three years (and some expensive repair work) before the LHC is really ready to run at its theoretical speeds and energy levels.

Michael Barnett, at the Lawrence Berkeley National Laboratory, is a real veteran of the supercolliding business and he’s clearly happy to see this one start up again. Barnett said he had worked on an experiment for the Superconducting Supercollider for a decade until it was cancelled (ouch!) and now he’s put in 16 years on an experiment at the CERN collider. Barnett said, “We are on this planet and in this universe a short time. The dreams of a lifetime are waiting, and hopefully not much longer.”

For more, read the New York Times, the Washington Post, Wikipedia, Scientific American here and here, the LHC website and the Guardian’s minute by minute blog on turning the LHC on.

Main photo: A graphic showing a collision at full power is pictured at the Compact Muon Solenoid (CMS) experience control room of the Large Hadron Collider (LHC) at the European Organisation for Nuclear Research (CERN) in Meyrin, near Geneva March 30, 2010. Scientists at the CERN research centre will begin trying on Tuesday to make particles collide at ultra-high power and close to the speed of light to create mini-versions of the “Big Bang” that gave birth to the universe. Picture taken with a fisheye lens. REUTERS/Denis Balibouse