Donald Frey, the man who made the Mustang, takes to the...

Donald Frey, the man who made the Mustang, takes to the testing track in heaven 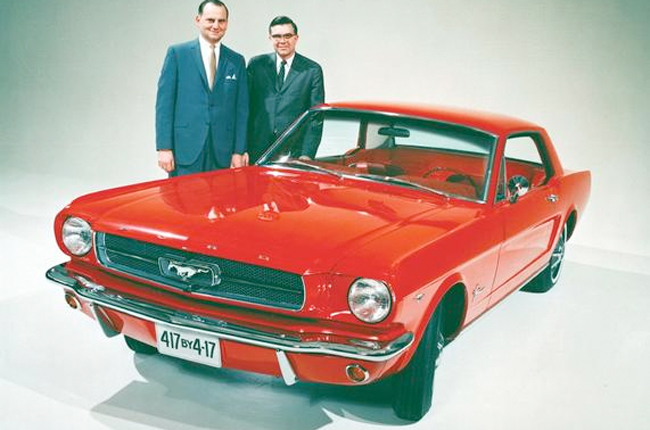 Donald Frey, the man who created the Mustang, the stylish, yet affordable Ford that became an automotive icon in the 1960s and 70s, died this month at the age of 86. The Mustang, of course, became one of the most successful product launches in automotive history.

Even though the guts of the model came from other Fords like the dumpy Falcon’s basic chassis, the Mustang quickly developed a unique identity that baby-boomers embraced in their eagerness for new looks and experiences. It had a touch of elegance borrowed from European sports cars, and it featured that distinctive galloping mustang – right smack in the middle of its grille that owners (and everyone else who lusted after one) thought was really, really cool.

Whenever the car was in a film, it was the centre of attraction. Steve McQueen – Steve McQueen no less – was nearly upstaged by the Mustang he tooled around in, in his signature film, Bullitt.

Unlike most new cars, Frey and his team created the Mustang in just 18 months and corporate expectations were modest when it was launched at the 1964 New York World’s Fair. Ford’s green-eyeshade types initially projected sales would total less than 100,000 in its first year. Wrong. It sold more than a million units in its first two years alone.

Frey later had a full career beyond the Mustang – he became CEO of Bell & Howell Company, taught engineering at Northwestern University and became a member of the executive board of the World Bank. He always said his proudest accomplishments were actually safety-related, like bringing disc brakes and radial tyres to Ford cars. But to people who loved cars, the Mustang was his masterpiece and Frey found himself being pursued by autograph hunters whenever he showed up at an auto show. In developing the Mustang, Frey worked closely with the legendary Lee Iacocca and the Mustang prototype, a mid-engine two-seater, was ready by 1962. Frey so believed in the car, he carried on working on it semi-secretly after company president Henry Ford II turned down the proposed project four separate times. Frey told USA Today a few years ago: “The whole project was bootlegged. There was no official approval of this thing. We had to do it on a shoestring.”

Ford eventually relented and gave the go-ahead, but told Frey in words unfit for a family website that he would be finished if the car was not a success. Frey once told an automotive historian that he took the idea from the way GM restyled the clunky Corvair into the much snazzier Monza, but to his classes at Northwestern University he said that the real inspiration came from his children, who had said to him over dinner, “Dad, your cars stink. There’s no pizzazz.”

After he died, Frey’s son said that his father still had an original Mustang that he loved to drive – fast.

For more, read the New York Times, the official homepage of the Mustang, and Wikipedia