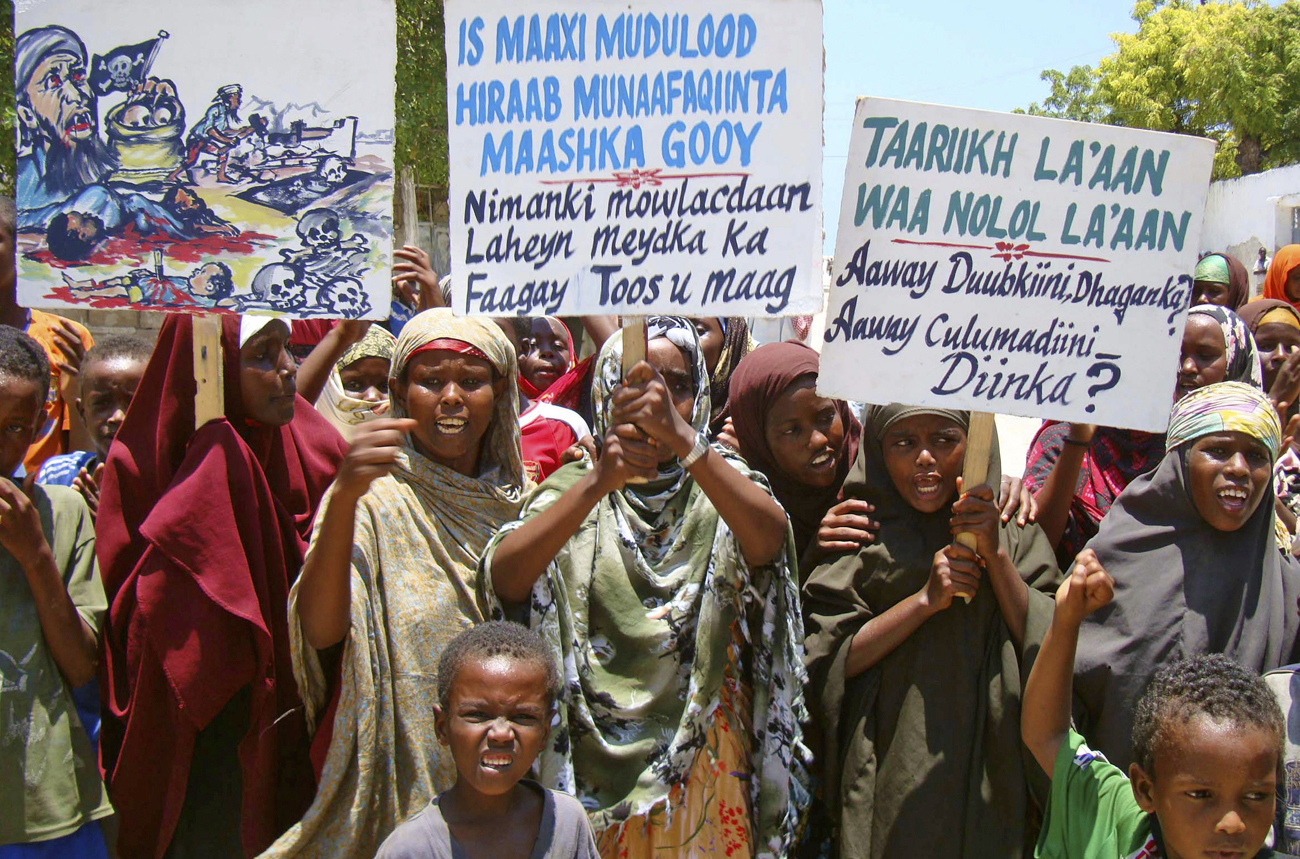 Hundreds of Somali men, women and children wearing traditional white clothes marched through the streets of Mogadishu chanting slogans denouncing al-Qaeda-linked al-Shabaab militants. It’s reportedly only the second public demonstration against the radical Islamist group which controls much of southern Somalia, and wants to impose a harsh form of sharia law on the anarchic country, including amputations and beheadings. The protesters shouted their support for the moderate Islamist UN-backed government, which occupies only a few city blocks of the capital, Mogadishu, under the protection of some 5,000 African Union peacekeepers. Organisers of the protest say people were upset at a move by al-Shabaab to destroy the tombs of revered Sufi clerics. (Sufiism is a form of Islam followed by many Somalis.) Somalia’s weak government recently struck a deal with the Sufi Ahlu Sunnah Wal Jama group, which controls large parts of central Somalia, and has joined forces with the government to defeat al-Shabaab.

Photo: Residents protest against al Shabaab Islamist insurgents in Mogadishu March 29, 2010. The residents were protesting what they say was the desecration of Sufi clerics’ graves by al Shabaab. Somalia has a rich Sufi tradition going back more than five centuries and Sufis have been angered by the desecration of graves, the beheading of clerics, and bans on celebrating the birth of the Prophet imposed by the hardline Wahhabi insurgents. REUTERS/Feisal Omar

Darfur rebels claim to shot have down two Sudanese army helicopters weeks after Sudan’s President Omar al-Bashir said the war in the troubled western province was over. Bashir recently signed ceasefire agreements with two separate rebel groups, but a third group, the Sudan Liberation Army, accused Khartoum of launching attacks using troops, helicopter gunships and MiG aircraft before the ink on the ceasefire agreement was dry. Sudan’s army claims two of its helicopters crashed after developing technical problems, denying there was an attack. The SLA was one of two main rebel groups that took up arms against Sudan’s government in 2003, claiming Khartoum was backing Arab militia against ethnic black Africans in the impoverished region. Since then some 300,000 people have been killed, according to the UN. The International Criminal Court in The Hague subsequently charged Bashir with war crimes and crimes against humanity.

Niger’s army has arrested 10 former ministers and officials loyal to ex-president Mamadou Tandja, accusing them of carrying out subversive activities. In February, the army ousted Tandja and set up the Supreme Council for the Restoration of Democracy, saying it wants to make Niger an example of democracy and good governance. Opposition parties supported the coup after Tandja unilaterally changed the country’s constitution to give him a third term as president. Among those detained are the former ministers of finance and justice, and the heads of the nation’s electricity and water utilities. The African Union suspended Niger after the coup, and the UN has urged the military to hold democratic elections as soon as possible. The junta has already picked a civilian as prime minister to lead the country to elections on an unspecified date, but the arrests are an ominous sign that this may be delayed.

Uganda’s Lord’s Resistance Army, which abducts children as soldiers and sex slaves, says a report that its members killed hundreds of villagers in the Democratic Republic of Congo late last year is fabricated. New York-based Human Rights Watch said 321 people were massacred in the country’s remote northeast in December, in a report backed by the UN. The LRA has fought a two-decade insurgency in northern Uganda, but now has splintered into groups that roam across the northeast DRC, southern Sudan and the Central African Republic. Millions of Ugandans were forced to seek safety in camps in northern Uganda and southern Sudan. An LRA official in Kenya’s capital, Nairobi, says the UN is looking for an excuse to keep about 20,000 peacekeepers in the chaotic DRC, after its mandate expires in May. The eastern DRC harbours the UN’s largest peacekeeping force, that’s trying to quell fighting some 16 years after the 1994 Rwandan genocide. It’s a fractious neighbourhood.

Gaddafi reiterates Nigeria should be broken into pieces

Libyan leader Muammar Gaddafi, who has adopted the title “King of African Kings”, has again suggested that Nigeria be broken up, but this time he says it should be carved into several states along ethnic lines. Nigeria recalled its ambassador from Tripoli earlier this month when Gaddafi proposed that Nigeria split into two countries comprising a Muslim north and mainly Christian south, after a series of violent clashes between Muslim and Christian gangs around the central Nigerian city of Jos killed hundreds of people. Gaddafi said Nigeria’s woes stem from the remnants of the British Empire. Last year’s chairman of the African Union has both detractors and followers on the continent. Not long ago he suggested that Switzerland be abolished.