A new Start on preventing the nuclear winter 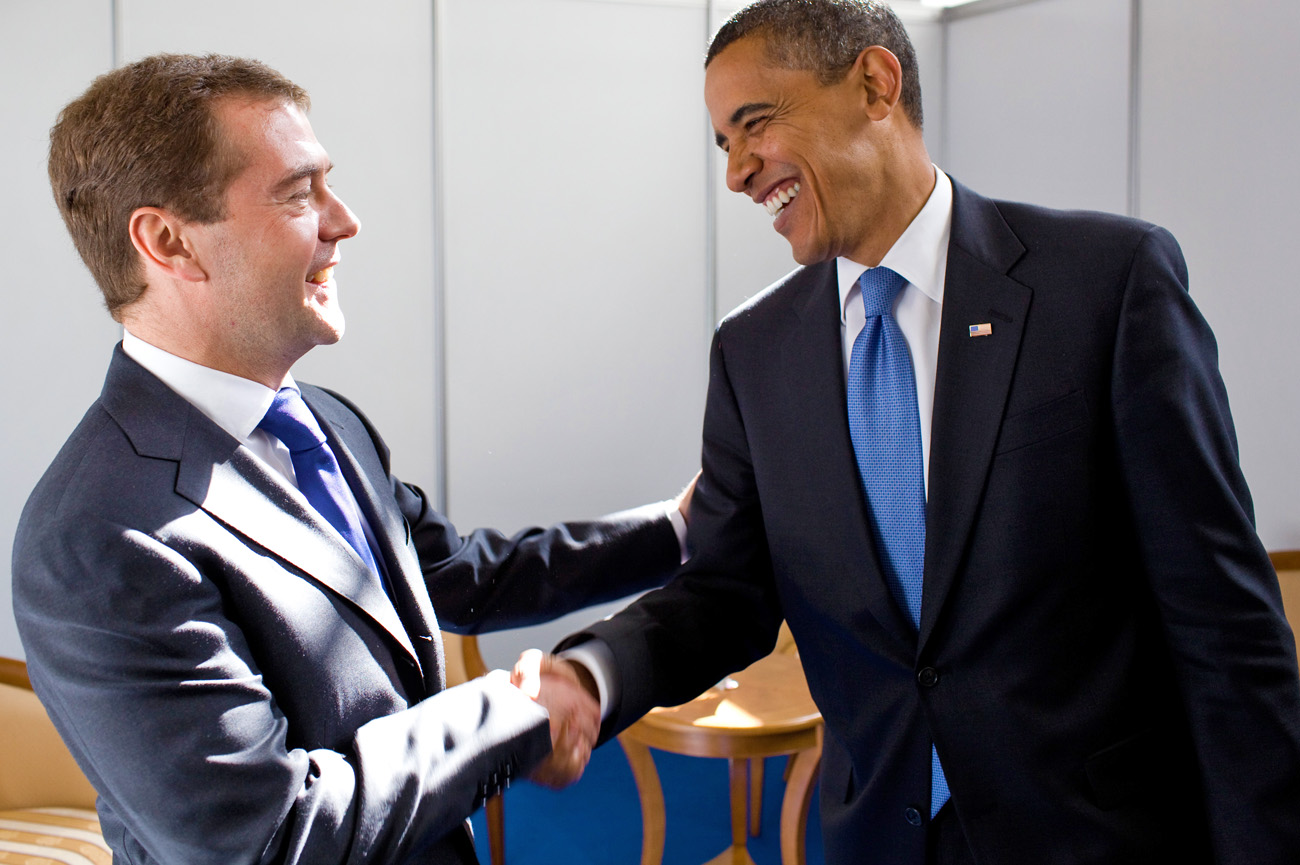 Maybe, just maybe, all those people who pooh-poohed Barack Obama's winning of the Nobel Prize will admit his efforts to advance nuclear disarmament were successful and that they rushed a little too quickly to their harsh judgements after all.

With the just-announced agreement that a new Strategic Arms Reduction Treaty between the US and Russia is to be signed shortly (although US’s ratification still depends on that unpredictable Senate, of course), maybe that bauble he got last year in Oslo really is worthy of what those five Norwegians said it stood for in the first place. Of course, it might also have been nice if there had been a little brass plaque on the side of the trophy with an asterisk and a note that read: “The winner wishes to acknowledge a vital contribution by his negotiating partner, Russian President Dmitry Medvedev”.

Nonetheless, the “win” with Start II, coupled with the recent passage of healthcare reform may have put the Obama administration back on track with a list of accomplishments, rather than feeding the muttering that Obama was just unable to close the deal, that he was weak and could be bullied. Obama now has real domestic and international victories, but his to-do list remains daunting.

Just for starters, there is the need for some success with Middle East talks despite the sour state of current US-Israel relations, coping with both Iran and North Korea’s nuclear ambitions and irrational regimes, achieving an orderly departure from Iraq, “winning” (whatever that ultimately means) in Afghanistan, creating an enduring economic and strategic modus vivendi with China and achieving passage of domestic financial reforms and energy plans – and some serious jobs, jobs, oh, and jobs measures.

This latest treaty, Start II is the newest in a half-century of efforts to put the nuclear weapons genie back into the lamp from whence it so famously escaped on 16 July 1945. As that first mushroom cloud rose over the test site in the New Mexico desert, Robert Oppenheimer, the physicist in charge of the research, had first thought of the verse from the Bhagavad Gita, “If the radiance of a thousand suns were to burst at once into the sky, that would be like the splendour of the mighty one…” but, as he watched the rising cloud, he prophetically said, instead, “Now I am become Death, the destroyer of worlds”.

Oppenheimer’s fears of a world that would fight its next war with nuclear weapons helped provide the impetus for a 1946 American initiative at the UN to internationalise nuclear power – and keep nuclear weapons out of the hands of other nations. The Russians had other plans as they were working hard on their own bomb, especially after they had obtained some key information about the research that had led to the first nuclear weapons.

Having the bomb was one thing, having a way to deliver it was something entirely different. At first, the solution seemed to be strategic bombers, but such delivery vehicles were vulnerable to counterattack in the air or at their bases. American (and Russian) defence planners soon fixed on intercontinental ballistic missiles because they could deliver more powerful nuclear devices from fixed sites. However, these sites could be pre-targeted by the other side and it became clear that missiles might only be good as first-strike weapons.

What was really needed – as theorised by the increasingly arcane science of Madd – mutually assured deterrence and destruction – was a way to deliver nuclear warheads that could also survive a pre-emptive attack. The viability of such weapons would deter a first strike by a nuclear-armed opponent because the response would still be appalling. The goal was not victory, but the definitive prevention of a surprise first attack.

This nuclear balance of terror became the perfect military doctrine for a world that was similarly divided into two armed, hostile camps.  Thus, from the late 1950s onward, the USSR and US worked to perfect rockets that could be launched from submarines.

Gliding silently under water, such subs could not easily be targeted effectively. Nonetheless, efforts to monitor and track them led to constant efforts to make them quieter and harder to find – and to arm them with missiles that could deliver multiple, independently targetable and deliverable nuclear weapons. If nothing else, this helped generate a whole clutch of unnerving movies about crazed submarine captains ready to launch missiles on their own recognisance – or to defect to the other side. The stability of Madd was also threatened by those real subs – if they could launch missiles unmonitored, the nuclear balance was again at risk.

Accordingly, steps to limit, then prevent nuclear weapons testing, limit the number of weapons delivery vehicles, keep the further proliferation of nuclear weapons technology to yet more nations in check, and prevent weapons from falling into the hands of terrorists or criminals has, in one form or another, increasingly preoccupied American (and Russian) strategic planners since the 1960s.

Concurrently, a broader, more citizen-based international “ban the bomb” movement in the west (while it was tougher in Russia, people such as their hydrogen bomb creator, Andrei Sakharov, made such efforts) began to take hold as well drawing upon fears that the nuclear balance could not be a permanent way to achieve a system of mutual international trust. The obvious parallel, the British-German naval arms race in the years leading up to World War I, was not a salutary example.

It was the 1962 Cuban Missile Crisis, starting with Russian efforts to create a game changer in the US-Russian military balance by basing missiles in Cuba that could reach the US in less time that it would take to destroy the launch sites, had almost provoked a nuclear exchange that would have killed millions of innocent people. The resulting shock of 13 days the world spent on the brink of nuclear war pushed the two nations to reach the first nuclear weapons treaty – the 1963 Partial Test Ban.

Thereafter, a whole series of treaties were painfully hammered out. These included the Nuclear Non-Proliferation Treaty, the Interim Agreement on Offensive Arms (Salt I) to freeze the number of intercontinental ballistic missiles and submarine-launched ballistic missiles, the Anti-Ballistic Missile Treaty (ABM), the Strategic Arms Limitation Treaty (Salt II) that limited missile launching platforms, the Intermediate-Range Nuclear Forces Treaty (INF) of 1987 and the Strategic Arms Reduction Treaty (Start I) that limited long-range nuclear forces in the US and the former Soviet Union. With the collapse of the Soviet Union, it seemed at first that the nuclear standoff might ease, but the two sides still had thousands of nuclear weapons at the ready.

Last Friday, Barack Obama announced what was increasingly becoming clear – the US and Russia had agreed to, in Obama’s words, “the most comprehensive arms control agreement in nearly two decades”.  The Russians had already let slip that the agreement was upon us.

Obama added, that “since taking office…I stated America’s intention to pursue the peace and security of a world without nuclear weapons” and that “a fundamental part of that effort was the negotiation of a new Strategic Arms Reduction Treaty with Russia… The new Start Treaty makes progress in several areas. It cuts – by about a third – the nuclear weapons that the US and Russia will deploy…It puts in place a strong and effective verification regime…. [and] the US and Russia – the two largest nuclear powers in the world – also send a clear signal that we intend to lead.”

Obama added that he also looked forward to hosting leaders from more than 40 nations “as we convene a Summit to address how we can secure vulnerable nuclear materials so that they never fall into the hands of terrorists. And later this spring … to discuss how we can build on this progress, and continue to strengthen the global non-proliferation regime.” Not too shabby if this happens, although the Senate still gets to say yes or no on any treaty, of course.

The New York Times applauded, but added, “We hope he [Obama] quickly sends his negotiators back to the table to get going with Russia on a follow-on deal that would make even deeper reductions in deployed weapons and, for the first time, in both the number of stored warheads and tactical nuclear weapons — the thousands of smaller bombs that are frighteningly vulnerable to covert sale or theft …The US and Russia cannot credibly argue for restraining other countries’ nuclear programmes if they are not moving ahead on reducing their own combined total of some 20,000 nuclear weapons.”

The Times added another warning flag: “The administration must convince senators that the verification regime is credible and that the text does not limit America’s ability to pursue missile defence. Administration officials are confident they can win both arguments, but President Obama must be prepared to make the case himself.” Indeed. Stay tuned on this one. Any nuclear weapons treaty will not move through the Senate in an afternoon – not in an election year.

For more, read the New York Times, Politico, the White House fact sheet, among other sources.

Watch: Dr Strangelove: “Mein Führer…! I can walk!!” (Okay, okay, we couldn’t resist, it is simply too funny!)