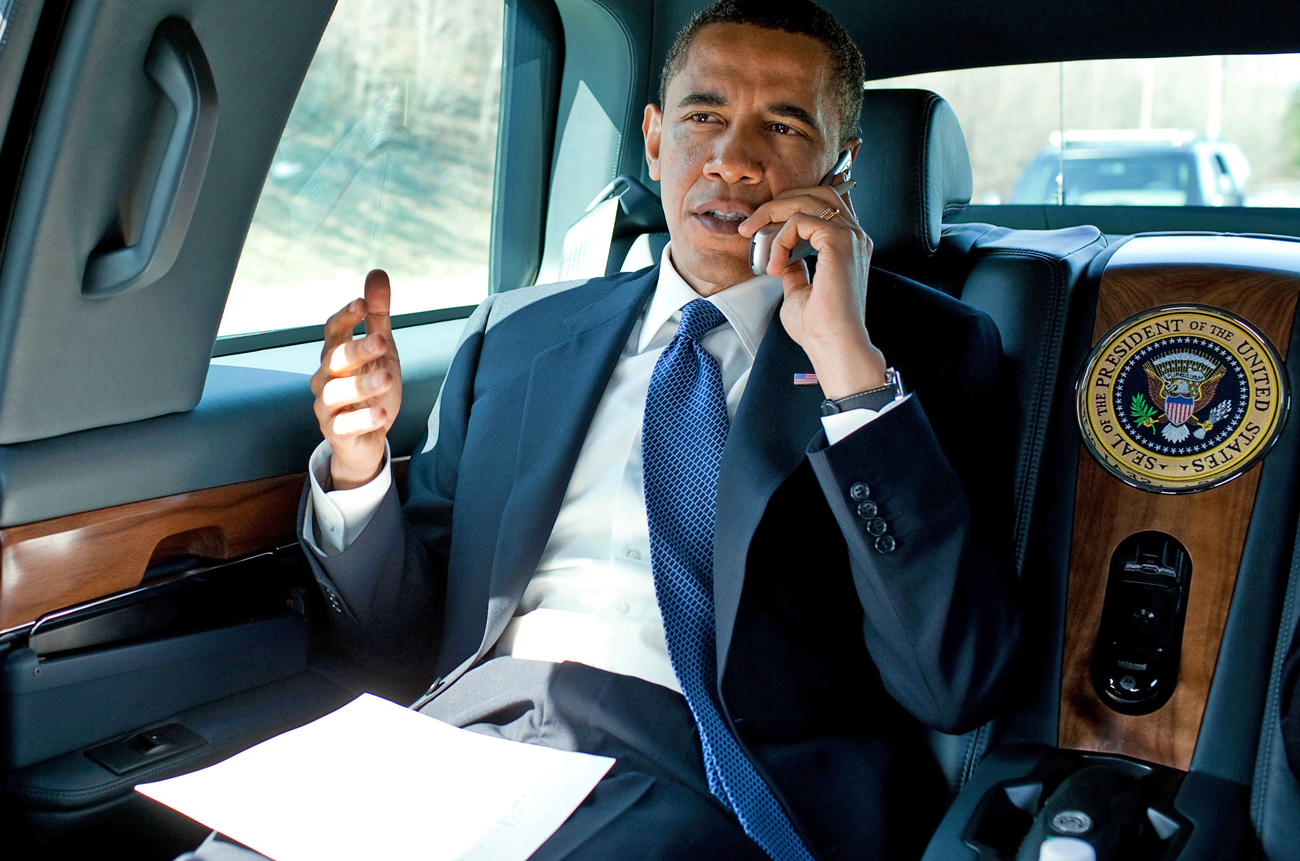 With Barack Obama and his Democrats’ victory – finally - in passing the landmark healthcare reform law, it would be easy to imagine officials in the White House slapping their hands together with gusto or doing those ritualised chest-and-fist bumps to celebrate their win. Far from it, actually.

This victory almost immediately substituted the image of Obama’s flailing presidency with the picture of a decisive, far-sighted, successful leader. The new view has become one of Democrats scanning the horizon for new worlds to conquer.

But US politics being what they are, the real but slightly different battle substitutes the political equivalent of a strategic air strike with one of trench warfare, conceding ground metre by metre. Now it begins in earnest.  And this time around, of course, it will not be a confusing tangle of debates in congressional committees.

Now that the bill has actually been signed into law, federal government offices are already moving to establish the actual mechanisms to implement initial provisions of the healthcare act. Indeed, the government is already gearing up to process and disburse the first of the benefits called for under the law. Similarly, private insurance companies and others in the health sector (approximately 17% of the total US economy) have begun to calculate the real implications of the new law on their respective businesses.

Moreover, the health insurance industry, showing a real sense of self-preservation, is already modifying its public rhetoric about the new law. Republicans, meanwhile, still fighting in the old foxholes, now threaten to delay and derail healthcare reform in the minutiae of the reconciliation bill that adjusts bits and pieces of the new law, or in rear-guard lawsuits by various state attorneys general and use healthcare reform as a club to beat up Democratic candidates in the upcoming mid-term elections. Yes, the devil is in the detail, but one can drown in that detail and turn voters off as well.

This is already beginning as Democrats, Republicans, unions, politically-connected think-tanks, consumer groups and business interests (and a ravenous horde of lobbyists) try to divine how best to draw upon the effects of the new healthcare measures for success in the November elections.

For starters, there is the membership of the House of Representatives, all 435 of them, 36 out of 100 Senators, dozens of governors and thousands of state and local representatives and council members who will be up for election or re-election in November. Because most of the House membership is elected from reliably “safe” seats, the real battle in November will be about 10% of the electoral districts in which the winning party won with a 5% or lower majority of the votes in 2008.

Beyond this mid-term election, there is the off-stage, but looming presence of the 2012 presidential election. The Republican primary process will formally begin at the end of 2011, but will actually move into high gear right after the mid-terms. Bill Clinton’s troops coined the phrase “the perpetual campaign”, Bush’s people made it their mantra and so it has become for every election thereafter.

What is happening now, of course, is that political leadership is trying to sort out how to make the best-tasting political lemonade from the apparent lemons left over after the healthcare fight. Republican über-spindoctor, David Frum, is already arguing for the reconstruction of his party’s stance towards the new healthcare reality, saying Republicans bet they could defeat the measure through a unified, total opposition to the measure in Congress, together with just enough defecting Democrats to carry the day. But, he asks, “What’s more important, to win extra seats or to shape the most important piece of social legislation since the 1960s? It was a go-for-all-the-marbles approach. Unless they produced an absolute failure for Obama, there wasn’t going to be any political benefit.”

This way, the Republican congressional leadership hoped to capitalise on the loud, populist fervour of the Tea Party rebellion (in tandem with its darker, uglier, conspiratorial side), together with the electronic fear-mongers on Fox TV and talk radio such as Glenn Beck, Bill O’Reilly and Sean Hannity, to encourage the already frightened parts of society to believe the measure was some sort of demonic plot to bankrupt the nation, gut Medicare, impose a government-run, single-payer plan and force stringent quotas on operations and other medical care – and, of course, impose the death panels that will decide should Grandma live or die, destroy civilisation and, the worst of all fears, ban all firearms.

Wartch: Glenn Beck Show, the day after the reform was passed.

Instead, Frum urges Republicans to embrace the obvious: Because they lost – repeat, lost – the congressional vote, the Republican’s public narrative must change if they are to get any further traction with voters who are not already firmly welded to the conspiracies. Frum says, “The political imperative crowded out the policy imperative. And the Republicans have now lost both.” Their dilemma, however, is that they are tied to supporters who declaim those apocalyptic charges that the new law equals the collapse of the American system, but move away from that narrative and they run the risk of losing the political support of those die-hard opponents living in that other universe of plots and conspiracies.

However, the key challenge for Republicans now is that polling data over the past year has shown that the more Americans have learned about the healthcare plan, the more likely it has been that they support it. Moreover, from what was close to an even split over the measure just prior to the final vote, still newer polls show a distinct shift towards support of the plan. Add to that the fact, now that the endless, internecine congressional struggle is over, the public will no longer have a daily TV dose of the mud wrestling over healthcare in four different congressional committees, between the two parties’ leaders and between the Democratic leadership and other congressmen who were sniffing out concessions for their pet projects as the price of their support. Additionally, while the debate rumbled onward for a year, critics could say that Washington was in a permanent stalemate. There was gridlock and nothing could get done. However, once the vote was done, Americans saw a clear decision on healthcare as well as progress on tougher financial regulation and student loan reform.

Looking back, it is now clear that those who wrote the legislation were very politically adept, really clever folks, in addition to their obvious goal of pushing for real healthcare changes. The new law has been designed to ensure that people (voters) – interest group by interest group – start to see the initial benefits from the new healthcare plan in the months before the mid-term elections. The implicit equation is: benefits = ballots. The measure delivers its first benefits in the next several months and phases in the more difficult, complicated, problematic elements over the next four years. First up is a $250 payment for everyone over 65 who uses Medicare, to help ease the burden of the growing cost of prescription drugs. Medicare was designed in 1965 when many common pharmaceuticals in use now were not yet available and the majority of the treatments of the diseases of old age were surgical or palliative in nature.

As a result, the Democrats’ pollster Svengali, Stanley Greenberg, by contrast to the Republicans’ Frum, has already argued that the healthcare victory represents a real opportunity for Democrats to do well in the mid-terms and consolidate their hold on power.

Greenberg says that once Obama re-engaged on healthcare a month ago with his Blair House summit and his vigorous pursuit of those terrible insurance companies, the public sat up and took notice. Meanwhile, the Republicans stayed put in their earlier posture, as newly elected Massachusetts senator Scott Brown made the party’s case (despite the shifting polls) against Democrats in their Saturday radio address, saying, “Rarely have elected leaders been so intent on defying the public will. In a democracy, you can only ignore the will of the people for so long and get away with it.”

And so, Greenberg argues, Republicans may have crossed a line with voters, especially independents. The evidence? For starters, support among independents dropped by 12 points on the question of whether or not they would support Republican candidates for Congress this autumn. Healthcare, the economy and other issues will matter, but Greenberg says “competence and progress count”, i.e. leadership and decisiveness. Greenberg adds, “The president should learn the bread-and-butter lesson of the last month: focus on telling voters what the insurance companies won’t be doing to you anymore. And then, create some jobs — that would be a true game changer.”

As the elections get closer, watch for Democrats bringing out a poor, working-class family who is now within sight of finally being able to get health insurance, or an elderly couple that can now afford crucial meds. Or watch out for Republicans – if they take Frum’s advice – wheeling out a small business owner who anguishes over the impending closure of his business because of the cost of giving his employees a break on insurance. Whose narrative is going to win? That’s the question.

For more, read the Democratic Party email, the Economist, the New York Times here, here, here and here, the Washington Post, the AP, Timothy Egan’s column in Opnionator, the Heritage Institute and the Brookings Institution.