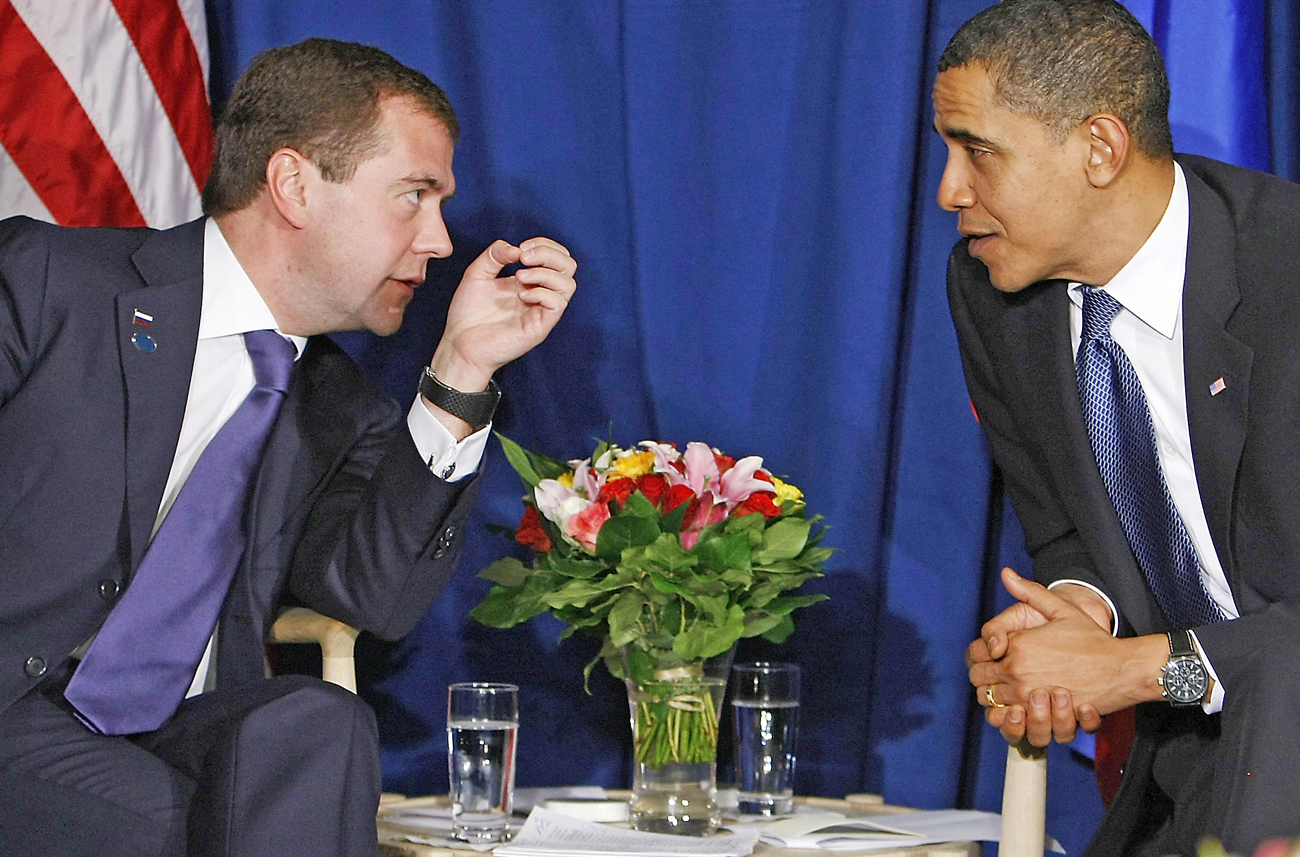 The US and Russia will likely soon sign a treaty in Prague that pledges to reduce their nuclear arsenals, in what’s described as the most significant pact in a decades-long attempt to diminish the risk of nuclear war. US President Barack Obama and Russian President Dmitry Medvedev are set to sign the treaty within the next two weeks – subject to finalising technical details. This will cut the number of long-range nuclear weapons held by each side to about 1,500 apiece. The deal is seen as raising the level of trust and cooperation between the countries, strained in recent years by the prospect of a Nato missile defence shield based somewhere in Europe. The process then faces months of ratification in theUS Senate and Russian Duma. Here’s hoping it’s a win-win situation. Photo: Reuters.

Israel and the US are busy trying to resolve a row over the building of Israeli settlements in East Jerusalem ahead of a new round of US-mediated peace talks in the Middle East. Israeli Prime Minister Benjamin Netanyahu may find he’s bitten off more than he can chew by continuing to resist American demands that he reverse Jewish housing plans, after a visit to Israel by US vice president Joe Biden sparked an unusually bitter diplomatic impasse. Now President Barack Obama wants Netanyahu to provide a written commitment on halting settlements in a part of the city that Palestinians want as the capital of a future state. The US says Israel should focus on substantive peace issues, such as borders and security, despite the Israelis saying construction of Jewish housing projects could begin at any time. But this time the Americans are not backing down, despite simultaneously supporting Israel at a UN human rights meeting.

Saudi authorities arrested more than 100 suspected militants who are allegedly part of a group led by a former aide to Osama bin Laden in neighbouring Yemen. Seized weapons, cameras, documents and computers show the group planned to attack oil facilities, foreigners and security forces in an attempt to unseat the Saudi monarchy and Yemeni government. Half the group was made up of Saudis, with others from Yemen, Somalia, Eritrea and Bangladesh. The Saudis have prevented a number of major terrorist attacks in recent years, including those targeting the country’s security chief and foreign oil workers.

Eurozone’s woes increase ahead of summit

The eurozone’s problems over Greek debt are compounding after the downgrading of Portugal’s economy this week, the battering of French President Nicolas Sarkozy by voters in regional elections in favour of Socialists and political tensions in Germany over bailing out errant members of the common currency. The EU has come up short as it has no mechanism for dealing with regional debt crises and France and Germany, in particular, are at loggerheads over the way forward. The paralysis has led to fears that Sarkozy’s Socialist rival, Dominique Strauss-Kahn, who’s managing director of the International Monetary Fund, may come to the rescue of Greece. This would leave the EU embarrassed by its own ineptitude and facing further punishment to the value of the euro by world currency markets. The EU’s holding a summit this week in Brussels where it will undoubtedly (against the wishes of Germany) mull over Greece’s claim that it can’t make necessary painful budget cuts while its cost of debt financing is double the prevailing market rate of about 3%. Portugal’s credit rating has been downgraded by credit rating agency Fitch over concerns about its debt of nearly 85% of gross domestic product. This has heightened fears about the health of other heavily-indebted European economies such as Spain, Ireland and even Britain. The euro just hit its lowest point against the dollar since May 2009, while major European stock markets slipped into negative territory.

The Geneva-based Global Fund, a group funding the battle against Aids, malaria and tuberculosis, hopes wealthy nations will give it up to $20 billion over the next three years, but also fears the global economic collapse will make a big dent in contributions. More than 95% of Global Fund’s money comes from rich countries’ foreign aid budgets, and pledges for the next three years will be made in October at a meeting at UN headquarters in New York. European governments have already indicated that budgets will be tight, despite millions of lives having been saved through Aids treatment, the distribution of 105 million mosquito nets and in fighting the prevalence of tuberculosis, which kills more than 1.5 million people every year. TB can largely be cured with a six-month course of antibiotics that costs only $20, so every cent counts.

According to newly unearthed Roman Catholic Church files that are part of a lawsuit, top Vatican officials didn’t defrock a priest who molested some 200 deaf boys over decades, despite repeated warnings from several American bishops. Internal correspondence from bishops in Wisconsin to Cardinal Joseph Ratzinger, who later became Pope Benedict XVI, show the Church chose to protect its reputation over dismissing the priest. Benedict is now facing accusations that he and his subordinates frequently didn’t discipline clergy, or alert civilian authorities to sexual abuse when he served as an archbishop in Germany, and as the Vatican’s chief doctrinal enforcer.