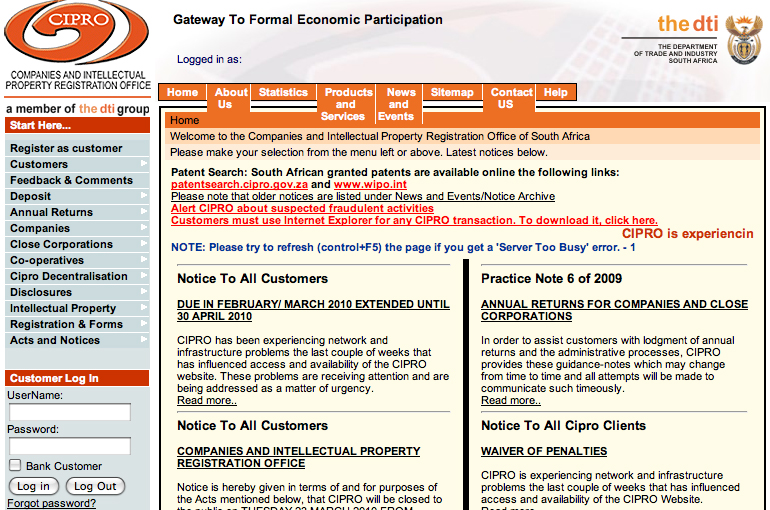 The sad story of the companies’ registration office, Cipro, is a classic tale of how government doesn’t work: those in charge are absorbed by grand, global issues while back in the office the actual work is ignored by a staff of stop-gap, job-hopping executives riding the black-empowerment whirlwind.

It may not seem that way right now, but there is a twist in the tale of Cipro. The new leadership at the Trade and Industry ministry has done something novel in approaching an outside investigation unit to look at the allegations of mismanagement and fraud which have circulated around office for more than a year.

For users, however, the legacy of mismanagement remains, demonstrating how difficult it is to fix things once they start spiralling out of control. The website of the Companies and Intellectual Property Registration Office (Cipro), which is an authority within the Trade and Industry department, currently has a banner warning customers that there are “high volumes of annual return lodgements resulting in customers being thrown off the web”. This is no issue of mere inconvenience, since private companies are legally obliged to lodge their results, and obliged to do so on the website – or face a fine. As a result of the problems, Cipro has been obliged to waive those penalty fees for late lodgement for all companies and close corporations.

This may be accommodating, but it has not stemmed the ire of business. The Times reports that the SA Institute of Chartered Accountants said at the weekend that the business sector had been “strangled” by IT problems and inefficiency at Cipro since October, and that the problems had steadily worsened. A senior executive of the institute, Ewald Muller, said the paralysis at the state agency “threatens the economy on several fronts, most notably in the inability of companies and closed corporations to continue operating within corporate legislation”.

The fact that there are problems with the IT system is no surprise, since the tender to upgrade the existing system has been at the heart of Cipro’s problems for over a year. The tender was awarded to company called ValorIT for R153 million,which was around R90 million more than the rival bid from more established company Faritec. Another BEE company, Mantra, is also involved and is also in dispute with ValorIT. As a result of this mess, an internal investigation was initiated.

Both companies are black empowered, but this did not stop the Cipro chief information officer Michael Twum-Darko, who has been placed on special leave two weeks ago to prevent him from interfering with the investigation, saying he is the victim of a racist plot.

Twum-Darko was strongly supported during the dispute by Cipro CEO Keith Sendwe, but it now appears that Sendwe has spent almost one year out of the past three years as head of the organisation absent from his office, mainly travelling the world to attend conferences from Australia to Vancouver to Brazil at a cost of about R800,000.

In response to parliamentary questions posed by Democratic Alliance MP Andricus van der Westhuizen, Trade and Industry minister Rob Davies said that that from the beginning of 2007 to the end of 2009 Sendwe was away from the office for 224 working days, either travelling or on leave.  He is currently ailing, and on permanent sick leave.

The Times also reports that Sendwe was suspended in 2004 from his job as head of revenue services for the City of Johannesburg amid a crisis over inflated utility bills sent to ratepayers. The city’s then-director of communication, Gabu Tugwana, said at the time that Sendwe was investigated for “non-performance and other irregularities”. Sendwe later resigned.

But back to that twist. In what appears to be a desperate effort to get the situation under control, Davies went outside of state structures and appointed renowned investigator Warren Goldblatt to take a look at the situation. Goldblatt has confirmed he was appointed to compile a report for the department, and that the report has been completed and handed in. However, he would not confirm what aspect of the many problems at Cipro he was asked to investigate or the key findings of the report.

The problems at Cipro seem like they are slight and temporary issues in a small sub-sect of the whole gamut of government. Yet they demonstrate a fundamental problem that faces all of government: the need to balance performance against the vague and multidimensional problems of dealing with the various aspect of black empowerment.

Faced with this balance, government has tended to overreach on the side of BEE as its constituency, and mandate, almost obliges it to do. The result, however, has too often stunted its performance (and intensified the irritation of its users) to the detriment of the country.