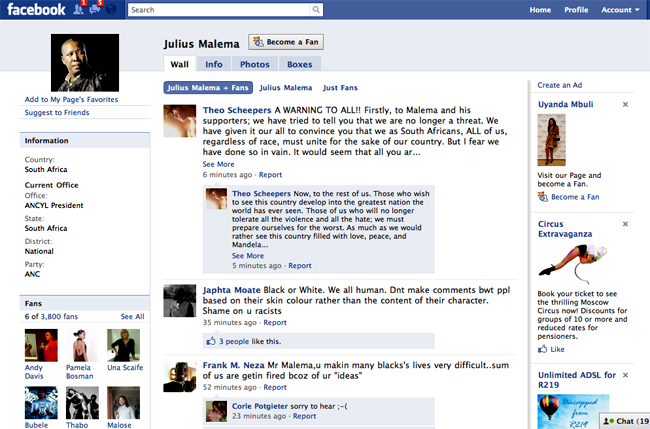 The latest furore surrounding Julius Malema, courtesy of Facebook, may, for once, not actually be his fault. But it highlights a worrying trend in our society: the attitude of (some) of our youth towards race. Ironically, this affliction seems colour blind, as young white – and black – South Africans spew out racist vitriol via the anonymity of internet, and youth leaders (yes, we are talking about the ANC Youth League) fail to distance themselves from such views.

By South African standards, it’s actually been a little while since we’ve had a good old ding-dong about race. And while it is not at all surprising to find that Julius Malema is at the centre of it, this time there’s no indication yet that he is actually consciously involved. Still, way too many people on both sides of racial divide are only too happy to make him a central figure in the latest incident.

On the face of it, it’s quite frightening. Someone sends you a screen grab of a Facebook page in the name of Thato Mbateti Mbateti. It has a whole lot of racial bile against whites, loads of swearing and claims that “we’re coming for you”. But look closer at the page, and it really doesn’t look like it’s written by anyone who knows anything about politics. It claims President Jacob Zuma will be dead within six weeks, for example. Basically, it feeds into all the fears of those who think Malema is going to be president and will drive whites into the sea.

There’s virtually no difference between this Facebook page and that email that went around a few years ago claiming that all black people were just waiting for Mandela to die, and then they would rise up and kill all the settlers. That got huge legs from middle-aged white office workers, who’ve watched their streets get more dangerous and pot-holed; people who, while missing the big picture, had a slightly legitimate fear.

What’s different here is the age of the people who’re getting involved in these racial discussions. Many of them seem to be pretty young. Students are perhaps the ones driving it more than anyone else. And before this email, the main battles in the South African cyberspace race wars were sparked by white racist sites. Using words like “houtkapper”, they seemed to be started by young white Afrikaans-speaking people. In fact, if anyone has form on using the web to incite racial hatred, it’s whites. First with sites like stormfront.org, and now social networking pages.

The real issue here is what’s happening with our youth. By now, it must surely be almost impossible to go through 12 years of South African schooling and not to mix with people of other races. Certainly, if you learn in English. If you’re taught in Afrikaans, with schools like Vorentoe and a couple of others, perhaps it’s easier. And when kids are in primary school, race doesn’t really seem to matter so much. But it’s about boys in late puberty, when testosterone is really kicking in. When to use the K-word somehow becomes cool. This seems to be the time when things are going wrong.

And this attitude seems to be continuing through to some tertiary institutions. The University of Johannesburg’s Doornfontein campus (where Malema gave his first performance of Shoot the Boer) provides an interesting example of a lack of racial mixing. This is the time in your life when you’re supposed to, ahem, experiment. But look around the campus, and black students, the majority, walk around together, and the whites seem to move in these small mobile laagers. Superficial observation, sure, but still, there’s no sense of a racially united place. It’s not the kind of place where enough black students know that the white students would never use the K-word. And that means it’s also the kind of place where white students don’t know that black students wouldn’t come and take their swimming pool.

And into that awaiting disaster, walks the tactful figure of Malema. Make no mistake, we don’t think Malema is behind this at all. Going onto Facebook simply isn’t his style. It could be the work of someone who thinks like him, or, someone who just has an interest in stirring up racial trouble. Which is plenty of people in South Africa these days, really.

But the ANC Youth League does have a responsibility to come out against it. It does have a responsibility to say, “this is not us”, that “this does not represent our views”. But Floyd Shivambu, the league’s chief spokesperson/bully is too immature and irrational to see things that way. He just wants to continue his war with the media, at all costs. And so things will take on a different hue. There will be those who will take the league’s failure to speak out on this as proof that they believe it all. To put it another way: yes, the Youth League has let us all down again.

Cyberspace is not reality. If it was, we would know the names and physical addresses of everyone who posts anything anywhere. But it is a mirror to our reality. And the one it holds up today is pretty depressing. Malema may actually be a victim here. But it’s difficult to become enraged without an enemy, and Malema’s role in this has been to provide white racists with one.