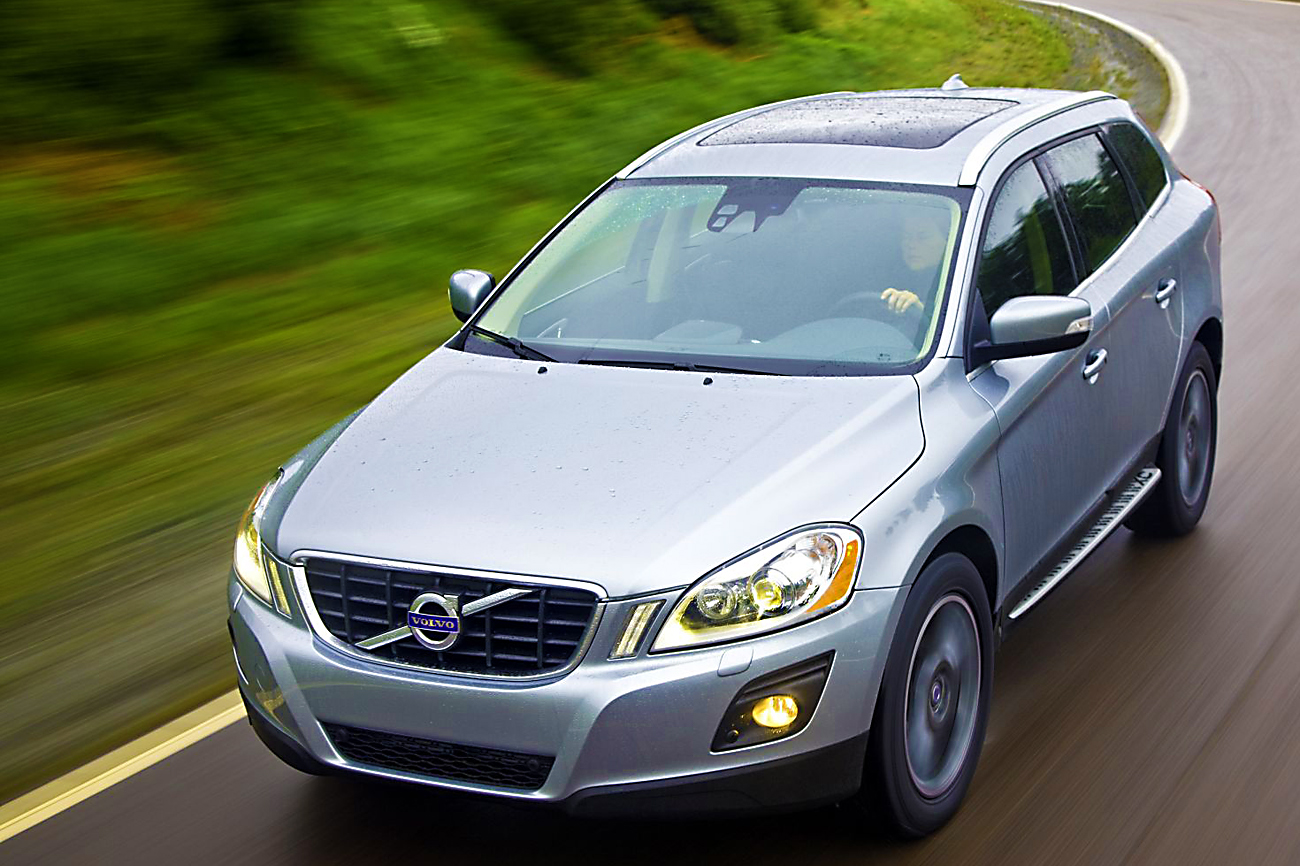 Volvo no longer builds bricks on wheels, designed specifically to please tough ladies in Wellington boots and their muddy Labradors. Eclectic, yes. And smart. And very, very safe. But that hasn’t stopped Ford from selling it to the Chinese – or trying to. Where does that leave a new-generation Volvo like the XC60?

Volvo has a reputation for building unusual, non-conformist cars. But there’s a lot more to the Swedish brand, and the XC60 is a good case in point. This mid-sized SUV is specifically targeted at the BMW X3/Audi Q5 segment, but looks and feels a lot more substantial.

The XC60 made its South African debut last year, and has since become one of Volvo’s best-selling models locally. That should come as no surprise, given the local, mine-is-bigger-than-yours obsession with SUVs.

But the XC60 also has handsome, contemporary (and yes, still slightly off-beat) styling, a premium interior, world-class active and passive safety systems and pretty decent road manners on its side.

The version under scrutiny here is the so-called entry-level model, which makes do without all-wheel drive, and is powered by a relatively modest 2.4-litre turbodiesel engine. The five-cylinder unit feels a lot more feisty than you’d expect, though.

Buyers get to choose between a six-speed manual and a six-speed Geartronic auto gearbox, but the test unit came with the automatic transmission. And while drive is to the front wheels only, the raised ride height and all-terrain tyres remain part of the package, allowing the Volvo at least to look the 4×4 part.

Even without all four wheels to do the pulling, the XC60’s 230mm ground clearance will come in pretty useful when heading off the beaten track – or simply negotiating the growing number of canyon-like potholes in our suburbs.

But back to the engine, which is transversely mounted in-line five-cylinder unit. Volvo took over from Audi as the world’s staunchest supporter of this off-beat cylinder configuration, deemed to offer better torque and efficiency than either a big-capacity four-cylinder or a small V6.

Unlike older Volvo five-potters, this one runs quietly and with impressive refinement, even if the exhaust note still sounds, well, unconventional. That’s Volvo …

The power unit has been optimised for clean and efficient operation, with the emphasis on midrange shove and low-rev cruising. A single turbo provides the boost from low down. The Swedish marque claims a maximum power output of 129kW at 4 000rpm, with accompanying torque peaking at a very healthy 420Nm.

Those figures sound frisky enough at face value, but are less impressive when considering the Volvo’s kerb mass of 1,8 tons. That equates to a power-to-weight ratio of only 72kW/ton – which is modest by any standards.

But there’s good news, too: the full 420Nm of shove kicks in from only 1 500rpm, despite some initial lag which results in a momentary hesitation when you boot the big Swede off the line from rest. That twist also means that the XC60 generally feels more enthusiastic than the on-paper stats would suggest.

In chassis and suspension terms, the XC60 is state of the current art, even if it’s obvious that the set-up has been chosen  to ensure decent on-road manners, rather than delivering off-road ruggedness. Thus, the XC60 rides on a fully independent configuration, with front MacPherson struts and a multi-link rear. Only the tall stance and the 230mm ground clearance confirm the Volvo’s SUV status. Which brings us to the subject of styling – an aspect at which very few Volvos have ever excelled. We’ll admit to having a soft spot for the P1800 sports coupé made famous by The Saint in the BBC TV series of the same name.

But there have also been some truly horrible Volvo designs, and even those that looked sort of decent at launch have shown a tendency to age less than gracefully. The current S60 comes to mind here, and is mercifully about to be put out to pasture.

Against that rather chequered styling backdrop, the XC60 has to be considered one of the more handsome Volvos to emerge from Gothenburg – and, for that matter, one of the most attractive SUVs on the market.

Unlike some of those older Volvos, this one has smooth contours and pronounced flanks, with none of the brick-like proportions of old. The result is a fresh and attractive shape that intrigues – for all the right reasons. Like the larger XC90, this Volvo’s appeal promises to be enduring, too. But let’s not forget that, for all its smarty-pants appearance, the Volvo XC60 is an all-terrainer, albeit more of a soft-roader than a gung-ho off-roader. And that implies an ability to tackle the dirty stuff.

Despite this, Volvo persists in offering an interior with creamy carpets and fashionably pale upholstery. Granted, it makes the cockpit feel smarter, lighter and more airy – but it also soils very easily, so that the result can look scruffy, even if it’s been subjected to nothing more than the close attentions of Madam’s Boston terrier and the monthly haul from Thrupps.

That’s really our only complaint, though. The rest of the cockpit’s execution is superb. The elevated driving position provides great all-round vision, and the luggage compartment is huge, swallowing up to 650 litres of luggage. Fold the split rear seats down, and luggage capacity increases to a mammoth 1 450 litres.

Comfort levels are high, and the fit and finish exemplary. Even this so-called entry-level XC60 gets plenty of standard kit, elevating the feeling of well-being even further.

Also remember that Volvos have always  been renowned for their very high levels of active and passive safety standards. From a full complement of intelligent airbags to electronic stability control, from assisted ABS brakes to specially designed headrests – the XC60 has it all.

An optional motorised tailgate provides convenient access to that large boot, which features an undercover tray for valuables. In keeping with its all-terrain status, the XC60 also comes equipped with a proper spare wheel, complete with the necessary tools.

Access to the rear is easy via wide-opening rear doors, and there is ample seating for two adults on the split rear bench seat – although legroom can be limited if the front occupants are tall and need to move their sculpted bucket seats further back.

Given all the comfort, luxury, convenience and safety on offer, it’s like sitting in a high-tech, fully equipped, personal lounge.

It’s a reasonably swift lounge too. The XC60 has a knack for making the most of the power on tap and once the turbo kicks in, there is impressive midrange punch. Volvo says the big SUV will hurry to 100km/h from rest in just more than 10 seconds – and that sounds about right. Top speed, for what it’s worth on our speed trap-infested roads, is 205km/h.

As far as road manners go, the XC60 is a polite and even forgiving soft-roader. The ride is firm enough to allow unambiguous communication between vehicle and driver, but forgiving enough to soak up the worst bumps and ruts.

The steering can feel a little wooden, but steering response is positive enough, so that the Volvo never feels unwieldy. It copes equally well with tar and dirt, but the latter capability is obviously compromised by the absence of all-wheel drive. Don’t go dune driving in this one!

Having said that, there is a lot to be said for an SUV with front-wheel drive only. Compared to its dearer, all-wheel drive brethren, this XC60 feels lighter, is less complicated under the skin and definitely more nimble in dynamic terms.

Besides, we all know that very few owners will actually use the all-wheel drive system of their SUVs for anything more challenging than the occasional gravel road or a stretch of potholed tar. Instead, the urban SUV driver demands the raised stance, the  creature comforts, the versatility (and the profile, of course), that only a typical SUV can provide.

That leaves the Volvo XC60 2.4D FWD as not only a very cost-effective SUV choice, but also a smart one. Add Volvo’s keen pricing, its extras and its exceptional safety, and it belongs on any SUV buyer’s shortlist.

The Chinese agree – in fact, Chinese automotive giant Geely wants to buy the entire company from current owner Ford. Except, the sale has hit a snag, despite assurances that Geely has met all the requirements. Could it be that Ford’s appetite for the ultimate Chinese take-away is faltering?

Either way, the XC60 proves that the Volvo brand is here to stay.

The Volvo XC60 2.4D FWD is one of the vehicles  featured in this week’s episode of the RPM TV motoring show.