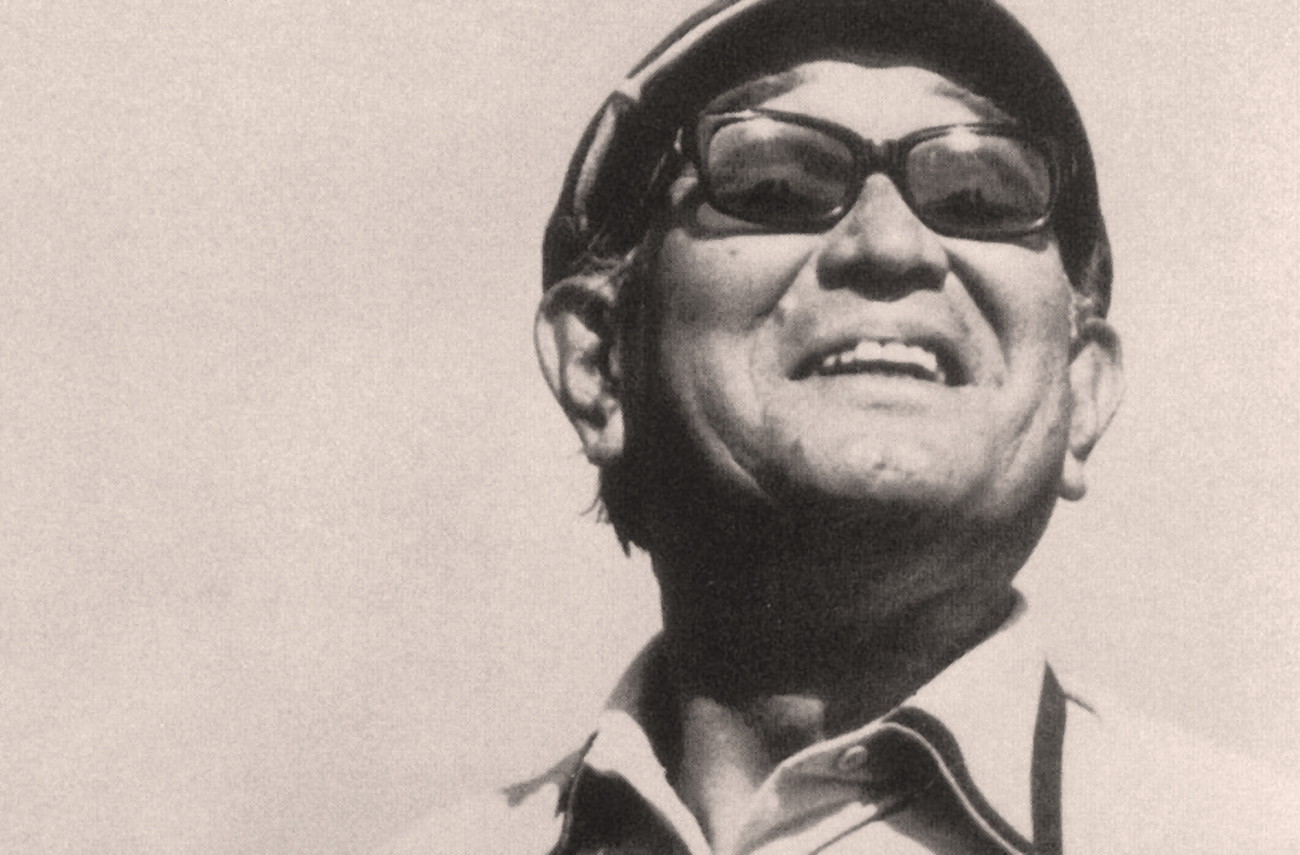 Over the last 100 years the global movie realm has been inhabited by many heroes and artists. But few of them could honestly count themselves in the same league as the genius from Japan, Akira Kurosawa.

For most people, outside Japan that is, Japanese films boil down to just three words: anime, Godzilla – and Kurosawa. The first is those animated, futuristic cartoons that have a cult following around the world; the second is an imaginary monster called up from atomic nightmares that has repeatedly destroyed a cardboard version of Tokyo. The third, of course, is one of the world’s towering film makers of the 20th century. Akira Kurosawa was born exactly 100 years ago today and over his long career he made some 30 films, ultimately receiving one of those lifetime Academy Awards “for cinematic accomplishments that have inspired, delighted, enriched and entertained worldwide audiences and influenced film makers throughout the world”, although he never won any individual Oscar.

Kurosawa came from samurai stock and his father directed a school operated by the Japanese military. In 1936, just as Japanese militarism was taking full control of the country, Kurosawa became an apprentice director at the PCL (later the famous Toho) studios. Not surprisingly, his early films were the kind of nationalistic, militaristic claptrap one would have expected from a wartime film studio in Japan; films like The Most Beautiful, about the heroic women working in an optics factory that produced lenses for the war.

After the war, his films became more critical of the old regime, but, it was his 1950 film, Rashomon, that brought him his first international accolade, the Venice Film Festival’s Golden Lion. Rashomon was based on Rynosuke Akutagawa’s famous short novel, In a Grove, that describes a heinous crime that has taken place in a bamboo grove – but from the perspectives of four very different people involved in the incident. This so-called Rashomon, or unreliable narrator effect, became something copied by many film and television directors once Kurosawa had used it (and entered the vocabulary in just about every language). Just the other day, this writer was talking with someone who first saw this film in university 40 years ago, and of how startling this work had been to her. Quite literally, it had changed how she even thought of the possibilities of cinematic storytelling.

During his life, Kurosawa evolved a truly distinctive cinematic technique, frequently using telephoto lenses because  they flattened the resulting image; he often stationed his cameras further away than usual to reduce the actors’ awareness of them, and, by simultaneously filming with multiple cameras, he would capture a scene from various angles, and then afterwards played with the results in the cutting room.

His admirers (and detractors) often referred to Kurosawa as Tenno (the emperor) and Kurosawa was truly a characteristically Japanese obsessive compulsives’ obsessive compulsive with his minute attention to every detail in his films. This ranged from his personal cutting of the dailies to his famously total concentration on the meteorological effects he used in his films. He fussed endlessly about the rain in Rashomon and in the final battle in Seven Samurai, the heat in Stray Dog, the dry wind in Yojimbo, the fog in Throne of Blood and the snow in Ikiru. Photo: Master at work on Ran.

In the creation of Rashomon, for example, he literally dyed the rainwater black with calligraphy ink because he didn’t think the rain was sufficiently visible against the sky while he was filming it. Or, in the last scene of Throne of Blood, he had real archers shoot near his long-time favourite actor Toshiro Mifune’s body to get the verisimilitude of actual arrows in flight towards a real actor. And, perhaps most famously, in filming Ran, he built an entire castle on the lava plains of Mt. Fuji and then had it burned to the ground for the visual quality of total destruction.

Kurosawa worried about every detail of the costuming in his films as well. He frequently ordered casts to become one with their costumes by wearing them for weeks before shooting even commenced and when his casts were to be poor farmers, as in Seven Samurai, he told them to wear their clothing to tatters even before filming began.

Despite – or perhaps because of his – being so highly regarded in the West, some Japanese film critics and theoreticians looked askance at his work because of his use of Western literary influences and filmic vocabulary. Yes, Kurosawa drew from the Shakespearean canon, from Russian authors such as Dostoevsky, Tolstoy, Maxim Gorky, from classic westerns, from Georges Simenon and from the works of American crime noir writers such as Dashiell Hammett. Kurosawa also drew his influences from film makers like Frank Capra, William Wyler, Howard Hawks and John Ford.

When he met Ford, the American famously opened the conversation with a simple, “You really like rain,” to which Kurosawa answered, “You’ve really been paying attention to my films”. Later in life the iconic photographs of Kurosawa always seemed to be his craggy face, dark glasses, monocular lens suspended from his neck, slouch hat on his head, standing against the sky – in apparent homage to John Ford. Photo: The posters for some of Kurosawa movies.

Paradoxically, western fans found his films to be almost Protean versions of Japanese style, attention to detail and imagery. In fact, balanced against his Western literary favourites, Kurosawa was deeply influenced by the Japanese traditions of Noh and Kabuki theatre, as well as the many feudal era, Jidaigeki-style movies that have been a long-time staple of Japanese popular cinema.

Ultimately, Kurosawa’s influence on global cinema has become immense. His films became exemplars or progenitors of whole schools of Western film making. Seven Samurai, for example, became The Magnificent Seven, even as it also inspired other men-on-a-mission films like The Dirty Dozen and The Guns of Navarone. And, Seven Samurai, beyond everything else, also popularised Kurosawa’s trademark use of slow motion.

Moreover, Kurosawa’s Yojimbo became the (unofficial) inspiration for Sergio Leone’s supreme spaghetti-western A Fistful of Dollars, which started the genre and launched Clint Eastwood’s career. (Kurosawa successfully sued for damages as a result.) And then there is the acknowledged impact of Kurosawa’s The Hidden Fortress on George Lucas’s first two Star Wars films.

Sam Peckinpah said of Kurosawa, “I’d like to be able to make a Western like Kurosawa makes Westerns” and Francis Ford Coppola said, “One thing that distinguishes Akira Kurosawa is that he didn’t make a masterpiece or two masterpieces, he made, you know, eight masterpieces.” And, of course, there is the action movie-genius, John Woo, who said of Kurosawa, “I love Kurosawa’s movies, and I got so much inspiration from him. He is one of my idols and one of the great masters”.

But, despite his international fame with other directors, and, with movie-goers around the world, Kurosawa often had serious trouble finding the financing to make his movies because of his supposedly un-Japanese, iconoclastic approach to film making. Kagemusha, in fact, was ultimately financed only with help from George Lucas and Francis Ford Coppola, and Ran was only made with the help of  French producer, Serge Silberman.

In 1985, this writer saw the Sapporo premiere of Ran. While the film was an absolutely idiosyncratic retelling of King Lear (with unworthy sons substituted for Shakespeare’s daughters) with enormous pageantry and what appears to be the population of a small country involved in the making of it, these apparently incidental touches have stayed deeply etched until today.

In one cataclysmic battle scene, near the edge of the screen image, almost hidden by the fighting, the smoke and the chaos, there is a samurai warrior who is holding his newly severed arm. He is in obvious shock as he tries to reattach his arm to his body. In another scene, a woman sits before a gold-coloured Japanese folding screen. An invading warrior decapitates her in her private chamber.  Though we do not see the actual violent act, in one astonishing moment, blood sprays across the golden screen almost like a calligraphic image. Besides everything else, Kurosawa had the absolutely perfect pitch for the small moments that illuminated and magnified the vast canvas on which he worked.

Run Jozi: SA runs for its life, finds its soul in Hillbrow