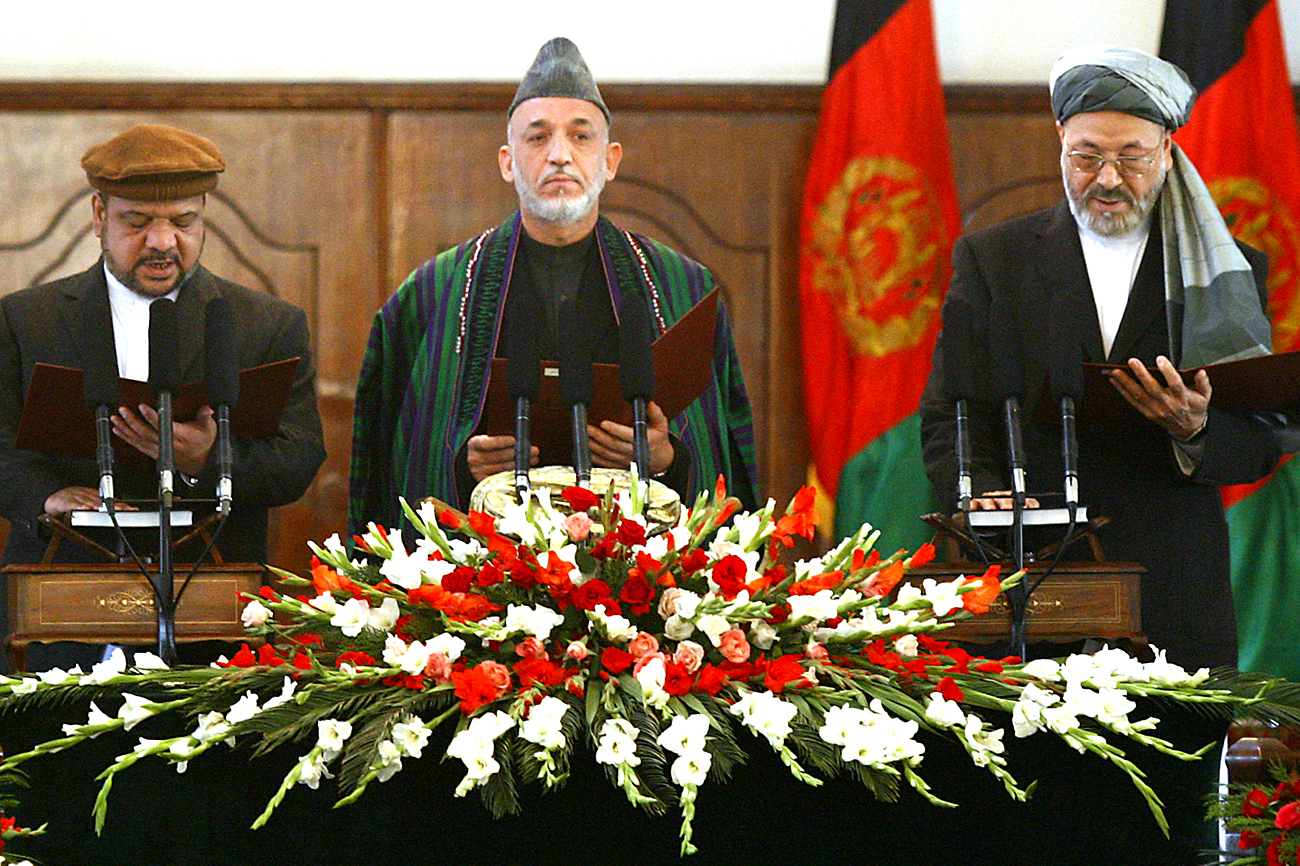 Afghan President Hamid Karzai has met with a delegation of Hezb-e-Islami militants, a major Taliban-related insurgent group fighting Afghan troops and Nato forces. This comes after Taliban leaders were arrested in Pakistan in recent weeks, which led both the UN’s former top official in Afghanistan and the Afghan government to say secret peace talks had been compromised (although the Taliban later denied such talks had even taken place). But now reports say the Hezb-e-Islami faction has told the Afghan government it wants foreign forces to start withdrawing from the country in July, as opposed to the middle of 2011, and in the meantime it will support the current government and parliament until presidential and parliamentary polls in March 2011. The militants also wanted a few more things, but say they’re open to negotiating the specifics. One well-placed Afghan official said the demands were outrageous, and showed just how weak Hezb-e-Islami is. Photo: Reuters.

Fresh from their landmark victory on US healthcare (although nothing’s ever over in US politics until a lot of singing has been done), Democrats sent a massive Wall Street financial regulation bill to the Senate, where the Senate Banking Committee met briefly to approve it 13 votes to 10, despite expectations of a week-long debate. There’s still a wide partisan divide over the bill, meaning it’s not all green lights for Congress to pass sweeping financial reforms. US President Barack Obama applauded the Senate committee’s vote, but is still seeking to strengthen the bill, which will complicate his bi-partisan hopes in later Senate hearings.

Google has stopped censoring the internet in China, and begun directing users there to its uncensored search engine in Hong Kong. That’s an extraordinary move, which will have Chinese officials frothing at the mouth. What comes next is anybody’s guess, as Google also said it would maintain other operations in China, in its desire to profit from the world’s biggest internet market. China’s authorities are not used to being told how things are, so the brouhaha has by no means ended. But the Chinese will now have to choose their next step carefully, as Google has elegantly put the ball back into their court. For now, the Chinese are so shocked, all they’ve been able to say is it’s “totally wrong”, accusing the world’s largest search engine of violating promises. They also claimed they’re uncompromisingly opposed to the politicisation of commercial issues. It’s real exciting stuff.

US Secretary of State Hillary Rodham Clinton says provocative Israeli land policies in areas claimed by the Palestinians are not in Israel’s long-term interests and undermine US credibility as a mediator. Speaking to a large crowd of pro-Israel activists at the American Israel Public Affairs Committee, her view was directly countered by visiting Israeli Prime Minister Benjamin Netanyahu, who continued to assume that building anywhere in Jerusalem is an Israeli right. The spread of Jewish homes on land claimed by the Palestinians threatens the establishment of an independent Palestinian state, which claims East Jerusalem as its capital. And while the US and Israelis indicate the issue shouldn’t damage ties between them, or delay the launch of a new round of Israeli-Palestinian peace talks, the truth of the matter is it’s a singular sticking point that’s held up peace for decades. And will continue to do so.

Greece’s economy is spiralling down, while the EU fiddles. The central bank says the country’s stuck in a “vicious circle”, and economic output in 2010 will fall by 2%, far worse than government’s prediction of between 1.2% and 1.7%. The Bank of Greece claims the nation’s recession will get worse because of planned, deep public spending cuts. But the EU is at sixes and sevens over the Greek debt crisis, and Germany is doing its best to keep it off the agenda at a forthcoming EU summit. The French say a high level of public spending is necessary for Greece to end its woes, while the austere Germans think that belt-tightening should be even more severe. The Greek central bank says the only way out for Greece is the drastic reduction of the deficit and debt. And while everyone in the EU would agree, the government has said at current high borrowing rates, the nation won’t be able to meet its reduction targets.

Britain’s Conservative party leader must wish he could get rid of some old stereotypes, which potentially threaten the Tory lead over Labour in recent polls. With an election looming, Cameron’s been embarrassed by the utterances of Sir Nicholas Winterton, an old-school-tie type of Conservative MP for the last 39 years, who expounded publicly on why legislators should be allowed to travel first class on trains to avoid exposure to the common man. “They are a totally different type of people,” he declared in a radio interview. “There’s lots of children, there’s noise, there’s activity. I like to have peace and quiet when I’m travelling.” That should get the votes in. On both sides of the class divide!

Burma’s Supreme Court refused to accept a lawsuit from detained Burmese political leader Aung San Suu Kyi’s National League for Democracy party. Earlier the party said it would file a lawsuit against the country’s ruling military junta, seeking to revoke laws that prevent Suu Kyi and other opposition members from taking part in the country’s first elections in two decades. In 1990 the military annulled an election that the NLD overwhelmingly won. Suu Kyi’s subsequently spent 14 of 20 years in detention, and now the junta’s just enacted five election-related laws that prohibit anyone convicted of a crime from being a member of a political party. It’s a no–brainer that this rules out the mother of Burmese democracy. The lawsuit was filed against the State Peace and Development Council (how Orwellian is that?), and the court lived up to its reputation as a junta lackey by giving it the boot. The junta says the elections are part of a roadmap to democracy, but it’s just a diabolical farce.

BBC opens new can of worms over profligate MPs

The BBC has uncovered some 400 breaches of parliamentary rules by more than 20 British MPs who accepted free overseas trips from foreign governments. The Beeb says they broke rules on declaring hospitality in parliamentary questions or debates after visiting warm and beachy places such as the Maldives, Cyprus and Gibraltar. The MPs come from all the major parties, so it’s not going to provide much fuel for the upcoming election. Typically, some MPs dismissed the breaches as technical errors or oversights, but the public is less likely to see it that way. The former Commissioner for Standards in Public Life, Sir Alistair Graham, said the breaches threatened to undermine the integrity of the democratic system. The latest revelations come on the heels of media reports of MPs spending public money to do such things as renovate second homes and change light bulbs, so expect a gale force response from the public.