Afriforum (and Steve Hofmyer) nearly come to blows with... 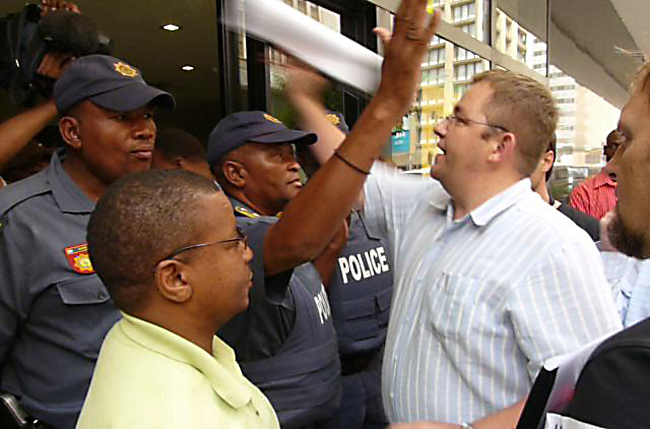 The attempt by Afriforum Youth to deliver to Julius Malema a list of murdered farmers didn't quite go down as planned. The march was banned, nobody would take delivery of the list – and then it nearly got very ugly as police intervened.

It came down to five representatives trying to deliver a document to the ANC’s headquarters in Johannesburg. They went by car, leaving their group of around 200 supporters behind in Mary Fitzgerald square. Which is just as well: because if some of the hotheads there (who threatened to go ahead with a march even though it was considered illegal, and police had a strong presence) have been at Luthuli House, there would have been serious trouble. “We are here on behalf of the Boere, and Lucky Dube,” said superstar Afrikaans singer Steve Hofmyer, proffering the document to an ANC representative, who refused to accept it. Shortly after, Kallie Kriel, the head of Afriforum proper, tried to enter the building – which is when waiting police stepped in smartly, forming a barrier between him and the door. That is when the finger-waving and shouting started. While en route to the confrontation, Afriforum Youth leader Ernst Roets revealed something he said he chose not to tell the waiting crowd, for fear of creating a mob. In a meeting with Malema on Thursday, Roets said, the ANC Youth League leader cited the IFP march on Shell House in Johannesburg as an example of what would happen should Roets’ organisation conduct a march with his, Malema’s, permission. On that day, 28 March 1994, 19 people died. Photo: Afriforum’s list of murdered farmers was torn and kicked into the gutter. Photo: The Daily Maverick.

But it is anybody’s guess whether that veiled threat or the subsequent treatment of Afriforum’s memorandum will create the most anger among white Afrikaners. After Kriel hurled the document over the heads of the police and small crowd, and right through the open doors of the building, it came sailing back onto the pavement. There it was stepped on and kicked into the gutter in what will be interpreted – whether or not it was so intended – as disrespect for those who were killed in farm attacks, the names of whom were included in the document.

“What we’ve seen here was nothing less than intimidation,” Roets told an impromptu media conference through an open window as the group got back into their vehicle. “They were not even prepared to listen to the victims in South Africa, people who are being murdered on the farms. “The ANC and the Youth League do not even care about them.”

Hofmeyr chose a more poignant turn of phrase. “I didn’t expect anything civil…” he told journalists. “I believe we’ve slipped the moorings of a wonderful ideal. It’s a bit sad.”

Afriforum says the failure to deliver the memorandum isn’t a particular problem, as it was only a courtesy before Malema gets to read about its grievances in court papers. The organisation has already started the process of lodging a complaint that it believes will lead to an Equality Court hearing on hate speech.

Main photo: The head of lobby group Afriforum, Kallie Kriel, in mid-throw as he tosses a memorandum addressed to Julius Malema into the lobby of ANC headquarters in Johannesburg. As soon as we overcome frustratingly poor upload speeds we’ll embed a Youtube video of the entire encounter, from which this is a still. Photo: The protesters made sure their feelings about the ANC Youth League leader were clearly displayed. Photo: The Daily Maverick.