18 March: Angela Merkel’s dilemma: will she, won’t she dump the Greeks? 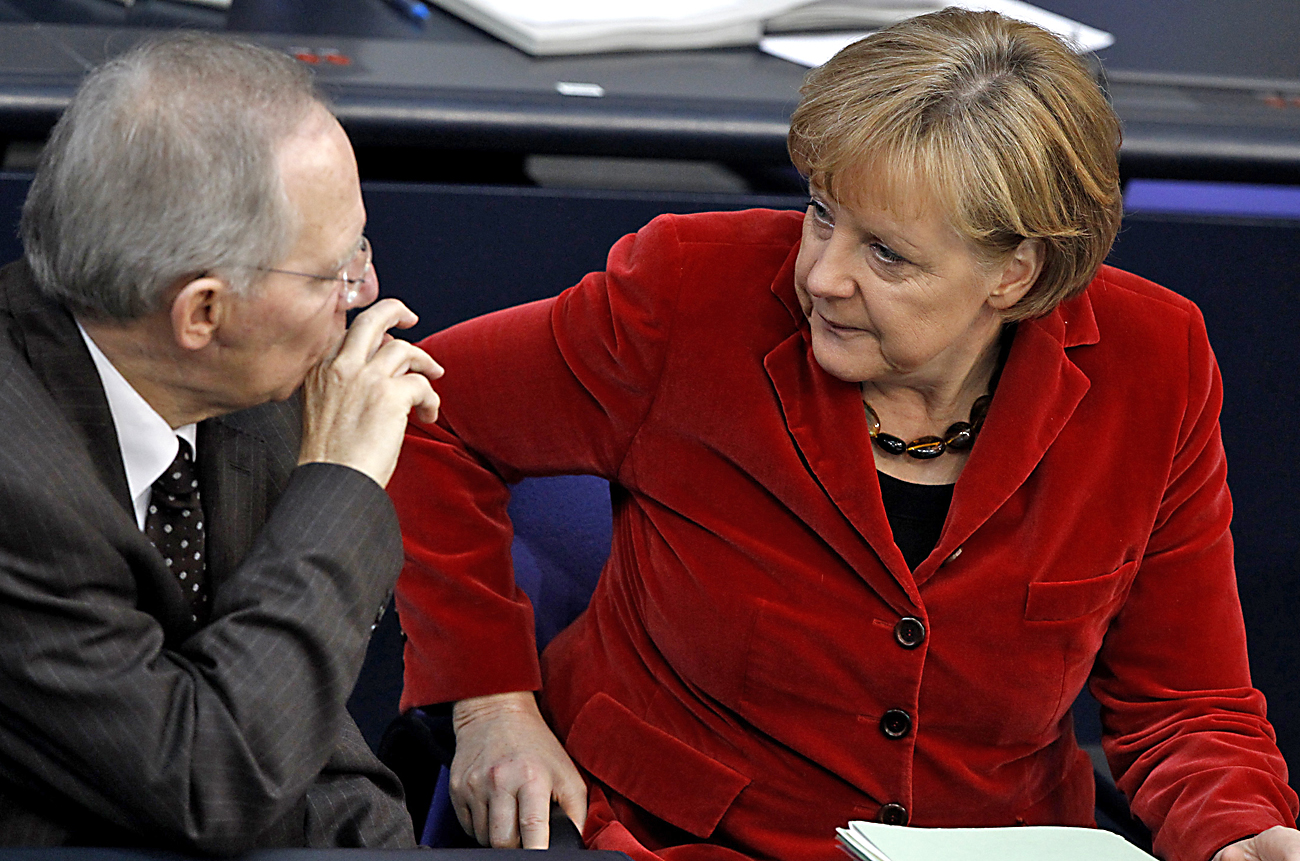 Angela Merkel’s dilemma: will she, won’t she dump the Greeks?

Germany’s Chancellor Angela Merkel says existing EU rules aren’t strong enough to deal with the crisis caused by Greece’s debt, so in future she wants the Eurozone to be able to exclude a stricken member as a last resort. She didn’t say Greece, exactly, but Greek Prime Minister George Papandreou immediately responded that there’s is no possibility of his country leaving the currency union. Germany’s the biggest economy in the single currency system, and is seen as increasingly reluctant to bail out Greece over its apparent $410 billion debt pile (some reports say $270 billion – big difference if it was your pocket money). The EU fears this will spread into Eurozone economies, already labouring to overcome the damage of the global recession. Merkel also said no Eurozone country would be left on its own to deal with the current crisis, but it doesn’t sound like Greece was included. What comes next?

Haiti’s government says the earthquake-shattered country will need $11.5 billion to rebuild itself. International aid agencies helped come to that estimate, which will be discussed at a major conference in New York at the end of March. Some 220,000 people are thought to have been killed by the quake, with structural damage in the region of $8 billion, or about 120% of Haiti’s gross domestic product. The sum presented means there’s quite a few billion extra factored in to get the economy back on track, so Haiti’s rulers obviously hope to make a completely fresh and upgraded start. The amount could rise to $14 billion, officials said. More than 70% of the losses are reported to have been sustained by the private sector, although schools, hospitals, roads and other essential infrastructure will need to be rebuilt from scratch. Expect donors to start prevaricating, and the actual terms and conditions of aid to be a talking point for longer than it will take to make Haiti nominally functional again.

A Pakistani court charged five Americans with planning terrorist attacks on the country and conspiring to wage war against allies of Pakistan (it’s not entirely clear-cut who such allies are). The young Muslims are all from the Washington DC area, and pleaded not guilty to various counts, one of which carries a maximum life sentence. The twenty-somethings were arrested after their families reported them missing. One of them left behind a farewell video saying Muslims must be defended. The court also reckons they were planning attacks in Afghanistan and on US bases there, but reports say the wording of the charges is pretty oblique. The prosecution is to present more than 20 witnesses, while the defence plans to bring witnesses from the US to provide evidence of how they did good community service there for unspecified offences. Sounds like these boys never really fit in back home, and just leapt from the frying pan into the fire.

American officials say a senior commander of al-Qaeda killed in an attack by an unmanned drone last week was responsible for helping kill seven operatives of the CIA late last year at a remote base in Afghanistan. His death means that the drone scored a bulls-eye during the strike on Pakistan soil, as it was aimed at the suspected brains trust behind a deadly suicide attack by a militant who the CIA thought would provide information on al-Qaeda. The covert drone attacks are an open secret, and information leaked by American intelligence is no doubt part of a propaganda war meant to show that there’s an eye to be had for every tooth pulled.

Burma’s junta slowly opening eyes to what’s around them

A natural-gas pipeline from Myanmar’s (Burma’s) Irrawaddy Delta will help resolve electricity blackouts in Yangon (Rangoon), Myanmar’s main city. It’s meant to be a small sign of economic revival in an economically-destitute country. But it’s not likely to impress Burmese who are lucky enough to have refrigerators and television sets, as for them the real issue is the release from detention of Nobel Peace Prize laureate Aung San Suu Kyi. She’s forced to live under house arrest with little chance of communicating with anyone, by a ruling junta that’s expected to introduce a new constitution later this year, and is planning the first elections in two decades. Suu Kyi’s National League for Democracy won hands down in the last election in 1990, but the military annulled it and made sure she’s been far from the public eye ever since. But now analysts say the elections could be the beginning of a move to decentralise some of the junta’s power, so the resource-rich country can escape its dire poverty and take advantage of some of the rapid growth experienced by its neighbours. Will Suu Kyi participate? Don’t count on it.

Lots of China’s best and brightest got educated in the US, settled there and set up careers with US technology companies. But now Americans are going the other way – and setting up in what’s become the world’s second largest economy. Silicon Valley’s Applied Materials — the world’s largest supplier of the equipment used to make semiconductors, solar panels and flat-panel displays – has just built its newest and largest research labs in the central Chinese city of Xian. It even held its annual general shareholder meeting there. It’s betting that China will produce two-thirds of the world’s solar panels by the end of this year, so American engineers are increasingly being drawn to a high-tech economy that is starting to compete directly with their homeland. Some American firms are now making deals with Chinese companies to licence Chinese technology. China’s become the world’s largest car market, so General Motors set up a major research centre in Shanghai.  It’s also the world’s biggest cellphone and PC market, causing Intel to open research labs in Beijing. Western companies are attracted by China’s legions of cheap and highly-skilled engineers, and the government subsidies offered for green energy companies. Now, researchers from the US and Europe have to be ready to move to China if they want to do cutting-edge work. It’s a brave new world out there.

Dogs are a Middle-Eastern invention

Domesticated dogs were thought to have originated in East Asia, but new research methods developed to study the genetics of human disease, now show they likely came from wolves somewhere in the Middle East. This matches the archaeological record of some 12,000 years ago. The boffins used wolf and dog genomes from around the world to determine that dogs were first domesticated in the same place as plants and other animals, evolving from an arms-length relationship with hunter gatherers some 20,000 years ago, through to a closer association around the time settled agriculture took off about 10,000 years back. The researchers found that the Middle East had the most similar wolf and dog genomes, and that after dogs had spread to East Asia, there was cross-breeding that injected more wolf genes into the dog. But earlier doglike remains have also been found in Belgium, at a site 31,000 years old, and in western Russia from 15,000 years ago.