Johannesburg, where the extra-crispy chicken crossed the road 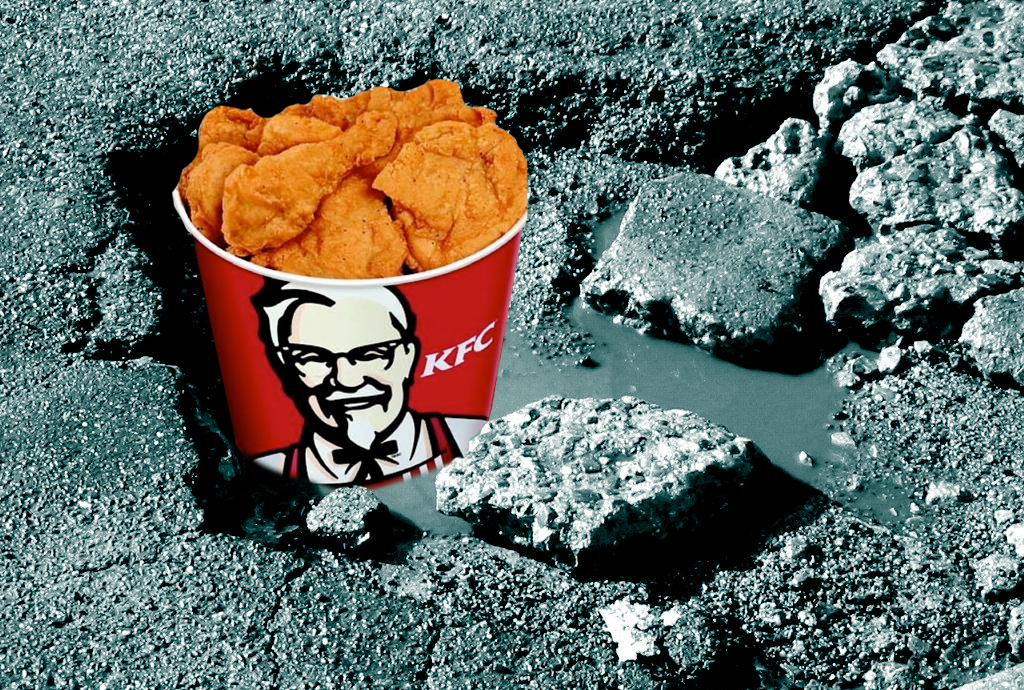 KFC, a fast-food artist formerly known as Kentucky Fried Chicken, is blasting the Johannesburg airwaves of late, boasting about donating R200,000 to the City of Johannesburg to stop the pothole epidemic. Apart from the fact that they probably spend more money advertising the deed than on the deed itself, it should leave us all with a sick feeling in our collective stomach.

It’s a small thing, but it’s also a big thing – KFC has donated R200 000 to fix Joburg’s potholes. Great, many a wheel will be saved. But think about it: What does it say about the continent’s premier city that it needs help from a fastfood outfit in the private sector for so basic task as road maintenance, less than 100 days before hosting the world’s highest-profile sports tournament?

Potholes are a small issue in the greater scheme of things (take a look at Johannesburg’s pothole problems compared to some in the rest of the world below) but they are also symptomatic of a dysfunctional government; if you can’t do something as simple as filling in potholes in your main traffic routes, then how on earth are you going to do the complicated stuff? Or anything for that matter?

Not to trivialise the issue completely, but as the joke about the stoned hippy goes: That hole in the ceiling is not just a hole, it’s the whole scene.

The answer to the small/big question of the potholes is, well, complicated.  Spokesman for the City of Johannesburg Virgil James said the city welcomed the donation by KFC, but was perhaps less than effusive. “A donation has been made, and that is fine, that is acceptable,” he said. Wow.

But he added that it wasn’t as though the city had run out of money to fill potholes. The problem was that there had been an unusual amount of rain this year, and this had unexpectedly compounded the problem.

The city does actually have people called “urban inspectors” who make recommendations and submissions about the roads and other issues such as rubbish on the streets to the relevant authorities. The relevant body in this case is the Johannesburg Roads Authority which has the responsibility to ensure the streets are safe.

This authority would have to make an, er,  “holistic assessment of the problem”  which might then involve more than just filling the potholes, but also retarring entire sections of road, he said.

“We are tackling the problem,” he assured us.

So we asked James, given that we know potholes proliferate when it rains more than usual, why don’t they just assign more people to pothole-filling duties.

Actually, he said, the staffing of the unit was adequate, but in situations such as the current one when the frequency of potholes wasn’t anticipated because of the rain “we would have to look at budgets again”.

Ah. So that’s the issue. Reading between the lines, we now get the picture. The problem is not staff, nor is it money. It’s about inflexibility and budgets. Nobody can do anything unless there is a budget line, and the budget lines are set way back when, long before anybody knows it’s going to rain a lot this year. Or rain at all. And because it’s a budget issue, now we have a real problem, because there have to be submissions in triplicate that have to be presented to the committee on this and rubber-stamped by the committee on that, and submitted to the relevant authority. Readers of The Hitchhiker’s Guide to the Galaxy are now forgiven for summoning up the image of Prostetnic Vogon Jeltz.

In the meanwhile, KFC is making hay out of the situation, claiming it is coming to the rescue of this great city, with the nauseating slogan: “To show our concern about the state of Gauteng roads, we have decided to take to the streets”.

According to KFC’s press release, the KFC spokeswoman Tanya van Schalkwyk says, “This was an easy decision for us to make. KFC head office in the US has participated in similar initiatives to repair local roads.

“The bad state of Johannesburg’s roads is an issue that not only affects our customers, but will affect thousands of fans coming in June. It’s time to take pride in our city and showcase Johannesburg as a world-class African city!”

There follows the usual challenge to other companies to make donations, despite the fact that the city says money is not the problem.

The real problem with KFC’s donation – and subsequent ad campaign – is that it’s a bit of a backhanded show of support. KFC is implicitly siding with “the people”, wittingly or unwittingly tapping into the service-protest movement. That’s, how shall we put it… ah, yes … Sneaky! And yet, it’s a real gap provided by an inflexible system and an under-resourced management.

It is in short, the South African problem, writ small. Let’s all pitch in and throw a bucket of extra-crispy chicken at it.