11 March: Thousands of Nigerians call for president to...

11 March: Thousands of Nigerians call for president to go 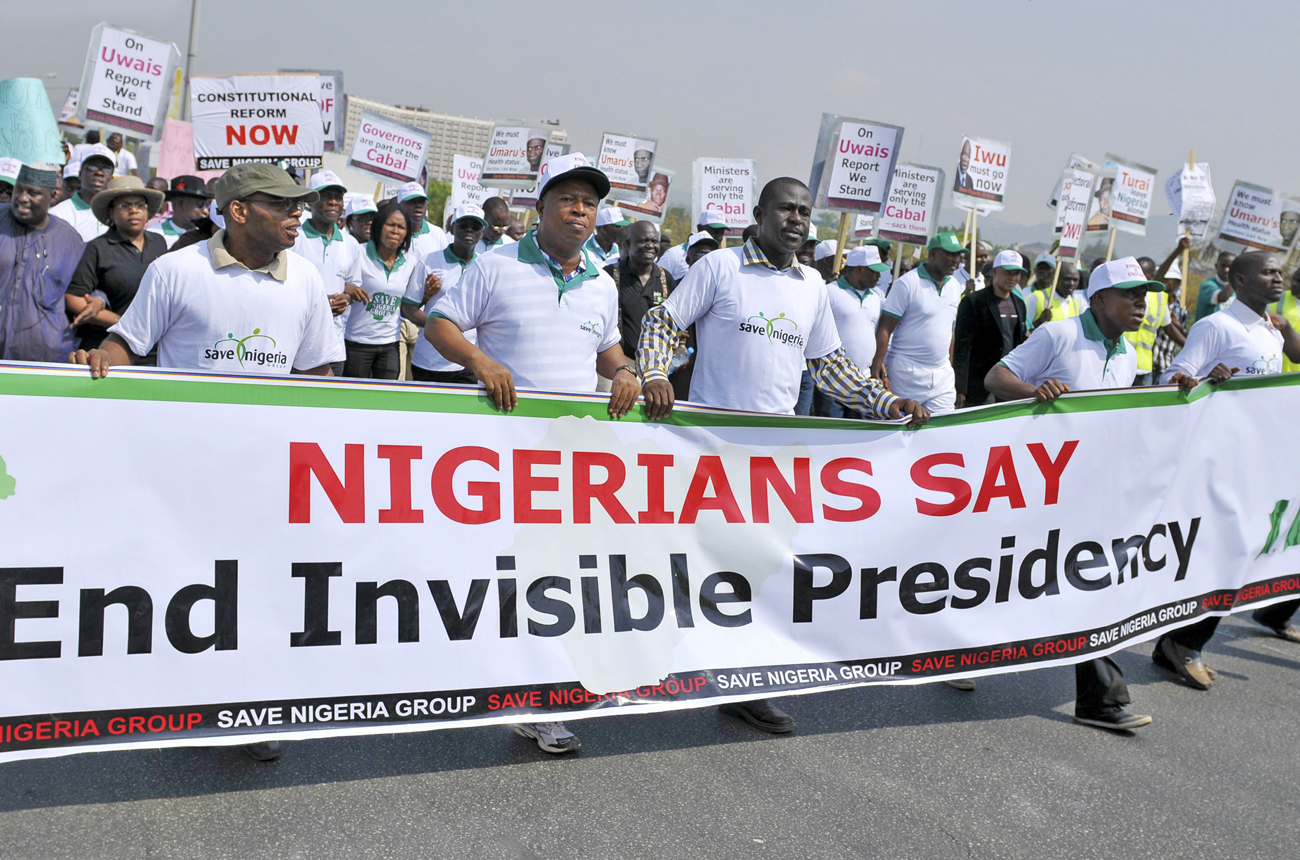 Thousands of Nigerians call for president to go

Nigeria is seeing a minor people’s revolt, weeks after President Umaru Yar’Adua returned to the country of 140 million following a three-month hospital stay in Saudi Arabia for heart problems. The presidency says he’s still in intensive care, so thousands of Nigerians marched to the gates of the presidential villa demanding an end to his presidency, saying they’re tired of a president they can’t see and who can’t govern. Yar’Adua’s had a history of illness, and this has long fuelled political restiveness across the nation. Acting President Goodluck Jonathan has already taken over as head of state with parliament’s blessing, but various court cases are being waged over the constitutionality of that move. It’s left many ordinary Nigerians feeling paranoid and frustrated, as they perceive a power vacuum that’s left government paralysed. Some think a cabal led by Yar’Adua’s wife is controlling the country, and that they’re fighting to maintain influence over Africa’s oil-rich and most populous nation. There are fears an amnesty for rebels in the oil-producing Niger Delta is stalling, and reforms in the banking, oil and gas sectors are threatened. There have also been mass killings in the central city of Jos in past months and days, where Christians and Muslims have clashed.

Photo: Protesters march along a road during a rally organised by the Save Nigeria group in the capital Abuja March 10, 2010. Hundreds of Nigerians gathered in the capital Abuja on Wednesday for a march to the presidency to demand the appearance of ailing leader Umaru Yar’Adua, two weeks after he returned from a Saudi hospital.REUTERS/Afolabi Sotunde

South Sudan’s democratic credentials are being tested ahead of a national election in April. Its government arrested dozens of followers of a leading independent candidate contesting the governorship of the region’s main oil state, according to Reuters. Sudan’s southern black African opposition have long been harassed in the Arab north, where they tentatively share power with the Khartoum government after a 2005 peace deal ended a 22-year civil war. But now there’s talk of intimidation in the south, where the former rebel Sudan People’s Liberation Movement dominates the semi-autonomous government. It’s vital the less-populated, but oil-rich south shows it can govern with integrity, as the first multi-party poll in 24 years will most likely be followed by a referendum on southern secession from the rest of the country. But that hinges on whether the more numerous voters in the north feel that’s to the benefit of the country as a whole, including sharing of oil wealth. And if they don’t the war could begin again.

A Spanish aid worker kidnapped with two others in Mauritania last year has been freed, but her male colleagues are still being held. Alicia Gamez is home in Barcelona, after being held by al-Qaeda’s North African wing in neighbouring Mali. The Spanish government says no ransom was paid, and that Gamez’ freedom was the work of Spain’s diplomats and intelligence services. Officials now say they want to ensure that the other two aid workers are freed, after Gamez indicated that they’re in good health.

Sheikh Mohammed Sayed Tantawi, Egypt’s foremost Muslim cleric, has died aged 81, while visiting Saudi Arabia’s capital Riyadh. He was the Grand Imam of Sunni Islam’s centre of learning and scholarship, and will be laid to rest in the Saudi city of Medina, where the Prophet Muhammad is buried. He opposed female circumcision, which is widespread in Egypt, saying it was not Islamic, and condemned suicide attacks, claiming extremists had hijacked Islamic principles for their own ends. His liberalism upset other Muslim scholars, after he said French Muslims should obey any law in France that might ban the veil. Sheikh Tantawi died of a heart attack while attending a prize-giving ceremony. His deputy is expected to temporarily take over his role until Egypt’s President Hosni Mubarak, also 81, appoints a new head. But Mubarak had gallbladder surgery in Germany last week, and has just left intensive care, so it’ll be a while before things settle at the al-Azhar centre that the Grand Imam headed up.

Niger’s junta appeals for millions of dollars in food aid

Niger’s governing military junta says the country needs $123 million in international aid to combat the risk of food shortages. But there’s no certainty that the UN will stump up after the military seized power in a coup last month. The change of government was widely applauded by the country’s opposition, after deposed president Mamadou Tandja unilaterally changed the constitution so he could rule for another five years. His regime made talking about famine a taboo subject, but Niger’s military rulers have accepted UN estimates that at least 200,000 children could face hospitalisation for hunger, while severe food shortages could affect almost 60% of Niger’s population. The junta has already appointed a largely civilian transitional government to organise elections on some as-yet-unspecified date, but donors fear that food shortages could undermine that process. It would be foolish to withhold aid, while the country’s struggling for democratic governance. Alleviating hunger is not politics, it’s a human imperative.