09 March: Sony to unleash range of 3D TVs by mid-year

09 March: Sony to unleash range of 3D TVs by mid-year 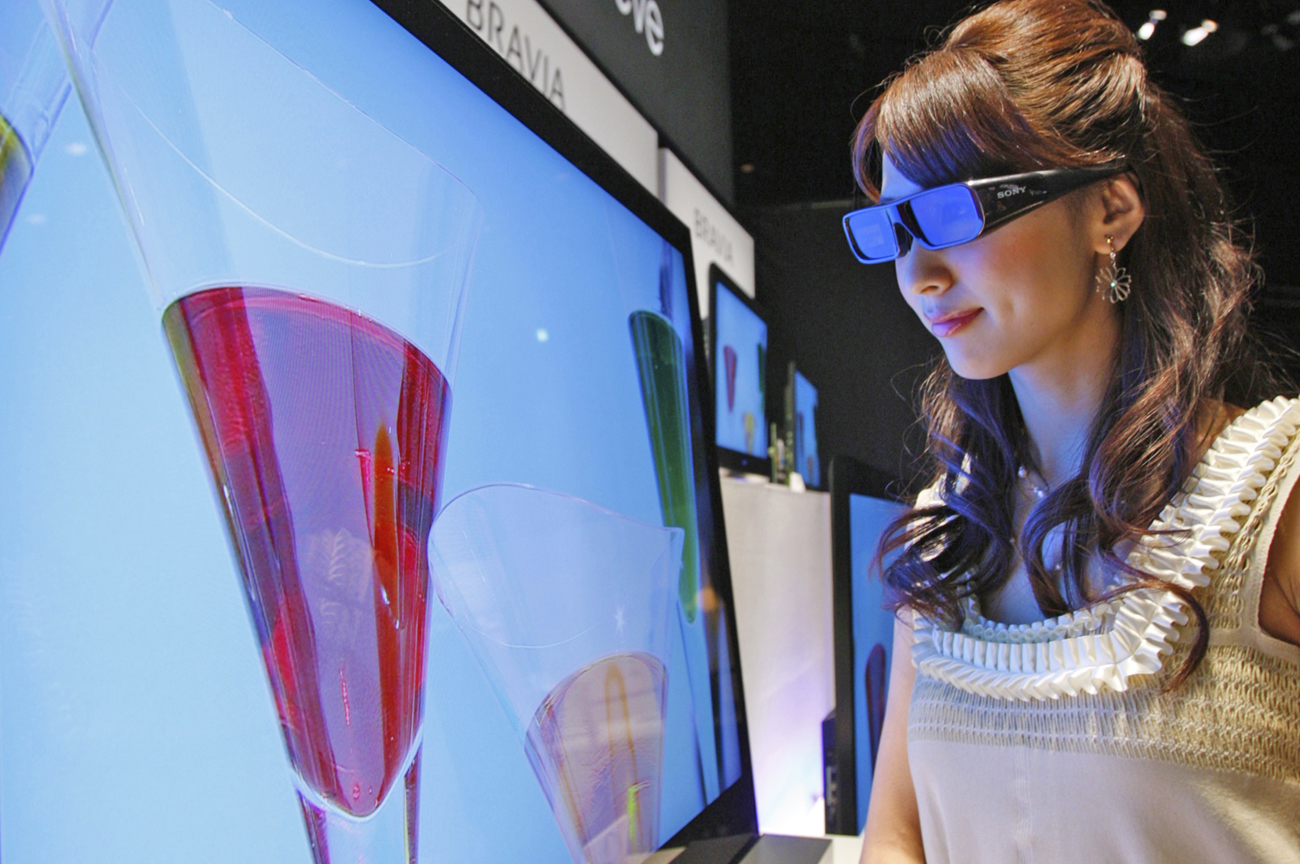 Sony will unleash range of 3D TVs by mid-year

Sony 3D televisions will be available worldwide in June, along with 3D upgrades to PlayStation 3 and other 3D-compatible home electronics products. The company’s first TV products are 40-inch and 46-inch models, costing between $2,400 and $3,900. In July six more sets, including 52-inch and 60-inch models, will be on sale. Some of the sets will be bundled with 3D glasses, while others will have glasses and transmitters valued separately at about $185. The transmitter sends out a signal to synchronise the electronic glasses. All sets will have a real-time 2D-to-3D convertor, which can turn a conventional 2D television image into 3D. Online prices should be cheaper.

Photo: A model wearing a pair of 3D glasses poses next to Sony Corp’s new 3D Bravia television during an unveiling in Tokyo March 9, 2010. Sony will launch 3D televisions in June, entering an increasingly crowded market that is betting the revolutionary TV will become the next hot product in the electronics industry. REUTERS/Yuriko Nakao

Greek Prime Minister George Papandreou told a US audience that speculative trading is driving up Greece’s cost of borrowings, hampering government efforts to unwind the nation’s debt crisis. He’s called on the US and EU to do something about this, after French President Nicolas Sarkozy also said he thought that exotic bets on Greece’s economy were making debt servicing more expensive. The PM again mentioned that Greece might turn to the International Monetary Fund to help get it out of trouble, at the same time expressing hope that such an unprecedented move among countries in the Eurozone would be unnecessary. Papandreou’s in the US, talking about Greece’s new belt-tightening measures to overcome its 12.7% annual budget deficit and massive debt. He mentioned to his audience at the Brookings Institution that the world needs to overhaul global financial regulations to prevent speculation, but what he really needs to admit to President Barack Obama during their meeting later today, is that Greece wildly over-spent in past years. The EU would be deeply embarrassed if the IMF helped rescue Greece, and is now mulling a German proposal for a European monetary fund to head off future debt crises.

Brazilians slap sanctions on US

Brazil has slapped trade sanctions against various American goods in retaliation for what it says are billions of dollars in illegal US subsidies to cotton farmers, and has the blessing of the World Trade Organization to do so. It’ll raise tariffs between 20% and 50% on nearly $600 million worth of US products such as cars and milk powder within 30 days, after eight years of litigation failed to produce a result. Cotton and cotton products may be penalised 100%, to drive home the Brazilian point. The US says it’s disheartened by Brazil’s decision and has called for a negotiated settlement, but after making lawyers rich for so many years, the buck had to stop somewhere. Brazil says the wide-ranging tariff increases are designed to maximise pressure on the Americans, adding that US farm subsidies are condemned worldwide; the US cotton growers, however, say new legislation has already almost halved their output.

Toyota on the back foot over vehicle defect repairs

Toyota says some 60 reported cases of sudden acceleration in vehicles that have been repaired might be because fixes are being done incorrectly. US traffic regulators warned Toyota they could order new remedies if the current ones don’t resolve its problems. Toyota could be up against negative public perceptions, despite repairing up to 50,000 vehicles a day. Repairs vary for different models among more than eight million vehicles Toyota recalled worldwide, with dealerships also adding brake override systems to deactivate the accelerator when the brake pedal is pressed. One driver of a Toyota Prius called 911 to report his accelerator was stuck, finally stopping the car some 20 minutes later, after reaching speeds over 140 kilometres an hour. Some of Toyota’s problems might stem from bad and paranoid drivers, and even those who cry wolf, but it’ll likely never prove that.

The Channel Tunnel between France and Britain turned a profit of $1.9 million in 2009, despite a fire in the tunnel in September 2008 that cut traffic for six months. The profit’s much less than the $46 million operator Eurotunnel made in 2008, but at least the company proved resilient in the face of the global markets crash and major train cancellations at Eurostar at the end of last year, when Europe’s icy winter disrupted services between London and Paris, and London and Brussels, for car and coach passengers, and freight lorries.

The state-owned China Publishing Group plans to raise as much as $264 million in an initial public offering in Shanghai in 2010, forming a new company for the listing. It’s also establishing a publishing website, and is developing e-book readers to better control copyright and generate increased royalties from distribution of content to e-reading devices. The group says it needs to go digital because readership of printed books is declining globally. It’s among a number of Chinese media companies wanting to raise capital by selling shares domestically or in Hong Kong. To gain economies-of-scale, Chinese authorities are combining 27 publishing groups into large-scale media entities. These listed companies will revolutionise ownership, and even foreigners will be allowed to invest in them.

China Southern Airlines to issue shares to pay down debt

China Southern Airlines shares leapt to a 21-month high on news that the carrier would raise $1.57 billion through the issue of new shares in Shanghai and Hong Kong to service its nearly $9 billion of debt. The airline expects to return to profit in 2009, and will use the proceeds of the share issue to help repay $2 billion of loans that mature by the end of 2011. The airline’s total debt burden is some seven times its total equity. But while the Chinese government has encouraged carriers to scrap or delay orders for new planes, the country still plans to buy 218 aircraft this year for its booming travel sector.

Drug-makers Sanofi-Aventis and Merck will tie up their animal health units in a 50/50 joint venture, combining Merial with Intervet/Schering Plough to become the biggest entity in the $19 billion-a-year pet and livestock markets. Estimated annual growth in the sector is 5% on average till 2014. Sanofi will pay Merck $250 million, after already buying Merck’s stake in its Merial business for $4 billion. The JV makes the new entity bigger than Pfizer Animal Health if it wins anti-trust clearance from regulators in the US, Europe and elsewhere.

Irish airline, Aer Lingus, lost $90 million in 2009, after fares fell by nearly 17% on average, despite passenger numbers rising by 3.8% to 10.4 million. The carrier issued a short trading update, saying it’ll delay its full-year results after its cabin crew rejected a cost-cutting proposal that would see about 20% of staff cut from its pilots, middle management, maintenance staff, some ground staff and cabin crew.