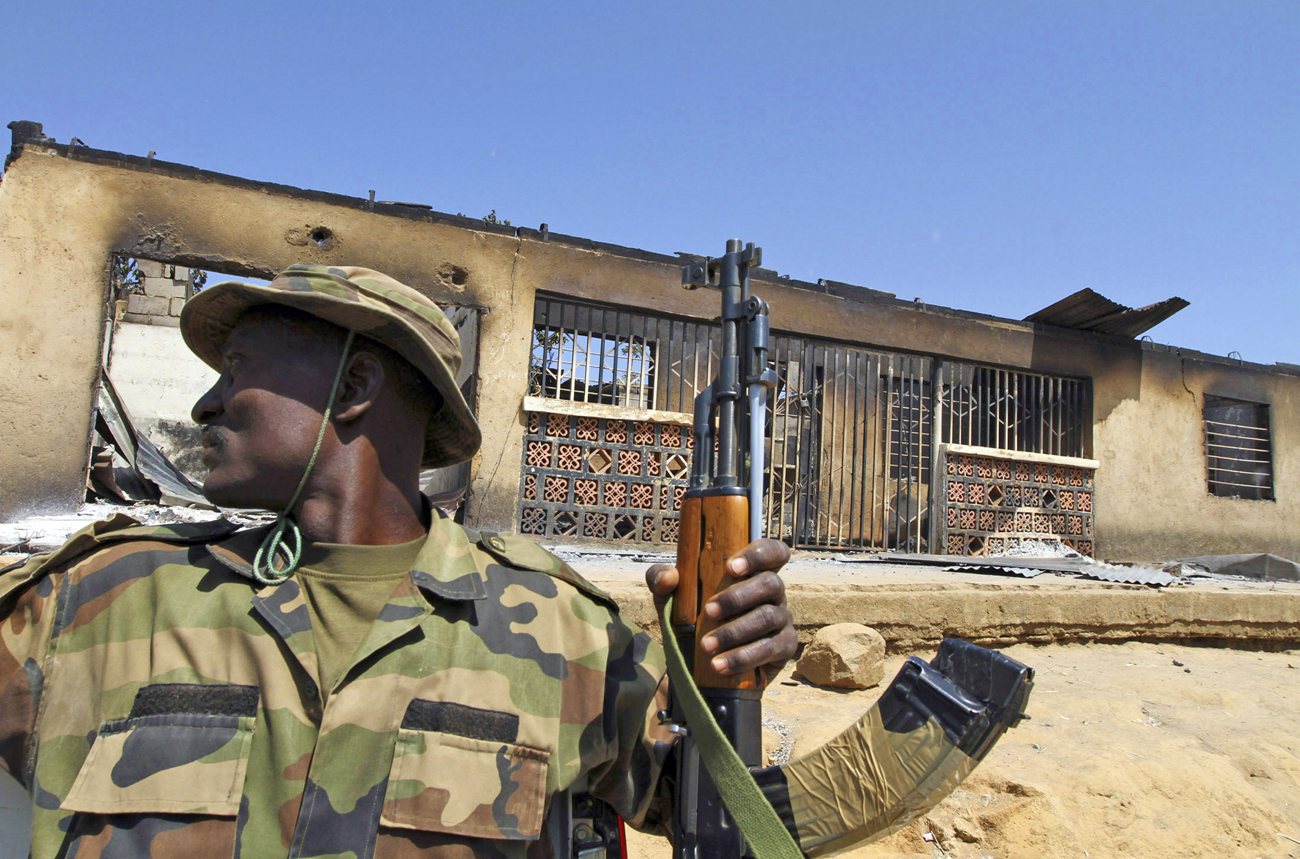 The central Nigerian city of Jos has erupted in violence again after hundreds of people were killed in January during religious riots there. Reports say corpses are piled up after a new bout of blood-letting, when gangs of men descended on a village a few kilometres south of the city, slashing residents with machetes. Security forces in central Nigeria are on full alert, following the murder of up to 200 people during clashes between Islamic pastoralists and Christian villagers. Photo: Reuters.

Nigerian soccer has been stunned ahead of the 2010 World Cup in South Africa after former U23 international Endurance Idahor collapsed and died during a game in Sudan this weekend. The 25-year-old striker, playing for Sudan’s Al Merreikh club, collapsed during a league game with rivals Al Amal. He is thought to have died of a heart attack after an incident of obstruction in the opposing team’s goal area. Idahor scored 118 goals in 176 appearances for his side.

Togo’s main opposition party, the Union of Forces for Change, says it doesn’t recognise the result of an election that returned President Faure Gnassingbe to power. They claim there was widespread fraud and that their leader, Jean-Pierre Fabre, won the poll and he should be the one to form the next government. Gnassingbe, the son of a late dictator of Togo, won 1.2 million votes of the 2 million cast, according to election officials. Fabre’s tally was said to be 692,584 votes. The opposition says it’ll challenge the result in the country’s constitutional court, claiming poll results were read out before being validated by the electoral commission. Quite how they think they’ll form the next government as a result of this mess is moot, but doesn’t bode well for the country in days to come.

A 20-year-old Egyptian blogger, Ahmed Moustafa, charged by a military court with harming the image of the country’s armed forces over allegations of nepotism, has been released after apologising, and on condition he removes his blog from the Web. His case has been kept on file, meaning authorities can charge the youngster for similar offences in future. Reports say Egypt sometimes uses emergency laws against bloggers, which allow indefinite detentions and trials for civilians in military courts, although those detained usually face civilian courts. A conviction could have resulted in a one-year jail term.

UN to start nominal withdrawal of DRC peacekeepers by June

The UN could begin withdrawing some 20,000 peacekeepers from the Democratic Republic of Congo in June, after the Kinshasa government requested them to start leaving by the 50th anniversary of the independence of the DRC. If that’s the only reason for withdrawal of the world’s largest peacekeeping force from the chaotic country, then it’s not a good one, and the UN needs to be a little clearer about the timelines. A 1998-2003 war killed an estimated 5.4 million people, creating a humanitarian disaster. That death toll is now much disputed, but nonetheless, the 1994 genocide in neighbouring Rwanda left millions of people in jeopardy, exacerbated by disease and dirty water. The UN says withdrawals of peacekeepers will only include those in the relatively peaceful west of the country. Draw-downs of troops in the anarchic east, where some 18,000 troops are deployed, will take much longer. In other words, any withdrawal is cosmetic, and is political PR ahead of forthcoming elections.

Sudanese President Omar al-Bashir is one of those people who lives in a glass house and likes to throw stones. He’s got an international arrest warrant for the killings of some 300,000 people in Darfur hanging over his head, but that hasn’t stopped him from dismissing UN sanctions imposed on the vicious little Red Sea state, Eritrea, last year. He attacked the UN resolution during a one-day working visit to see Eritrean President Isaias Afwerki. Eritrea is one of a few places in the world he can go without being arrested, after the International Criminal Court in The Hague charged him with war crimes and crimes against humanity. It’s now mulling over adding genocide to the list, saying Bashir masterminded a plan to annihilate three ethnic groups in Darfur through a campaign of murder, rape and deportation. Eritrea’s government likes to torture people and stick them in dark little holes, and expressed solidarity with Bashir during an earlier visit in 2009. He’s repaying the favour.

South African President Jacob Zuma claims that during his recent state visit to Britain he put his point across clearly about the need to drop sanctions against Zimbabwe to enable the country to start afresh.  But that’s all he did, as British Prime Minister Gordon Brown said the EU wants to see more progress on human rights and democracy before it lifts sanctions targeted against President Robert Mugabe and his acolytes. Zuma reckons the EU listened to what he said, as it’s an issue that impacts severely on South Africa. Some 3 million Zimbabweans have fled south across the border since 2000, placing huge social and economic strains on the country. It’s more likely the Europeans didn’t give Zuma’s words a second thought, as South Africa’s long-standing unwillingness to censure Mugabe led to the refugee crisis in the first place.

Niger’s military has released five of the six former ministers detained in the February coup, but will keep them under surveillance pending a corruption probe. The military says it’s still holding former president Mamadou Tandja, who was deposed after he changed the constitution to keep himself in power. The ruling junta says it’ll hand over power to civilians, but has not yet given a date for this process. Niger’s civilian opposition widely welcomed the ousting of Tandja, but things could change for the worse if elections are delayed. Tandja himself became president in elections some seven months after a coup in 1999. Everybody’s hoping the military will show the same political savvy this time around, in a nation that’s one of the world’s poorest, but attracts billions of investment dollars for its oil and uranium.

Nigeria’s police have come under fire from the country’s senate and police minister, and are accused of extra-judicial killings, assassinations and deliberate failure to comply with government directives. It’s rare for the government to make such charges publicly, but Nigerians have become more concerned of late about the nation’s endemic poverty, corruption and religious tensions, after President Umaru Yar’Adua left a power vacuum during his three-month stint in a Saudi Arabian hospital where he was treated for heart problems. He’s back home now, but he’s still not able to rule and political anxiety is high. In one instance of abuse of power, reports say police failed to attend the scene of a brutal robbery on the Lagos-Benin highway, which left many dead. There was no outcry until photos of victims reportedly made to lie down in the road while a bus drove over them began circulating on the Internet and were published by a local newspaper. Nigeria’s culture of police brutality means junior officers are expected to bribe their seniors for promotion, for accommodation and for vital equipment, with criminals often much better armed than the cops.