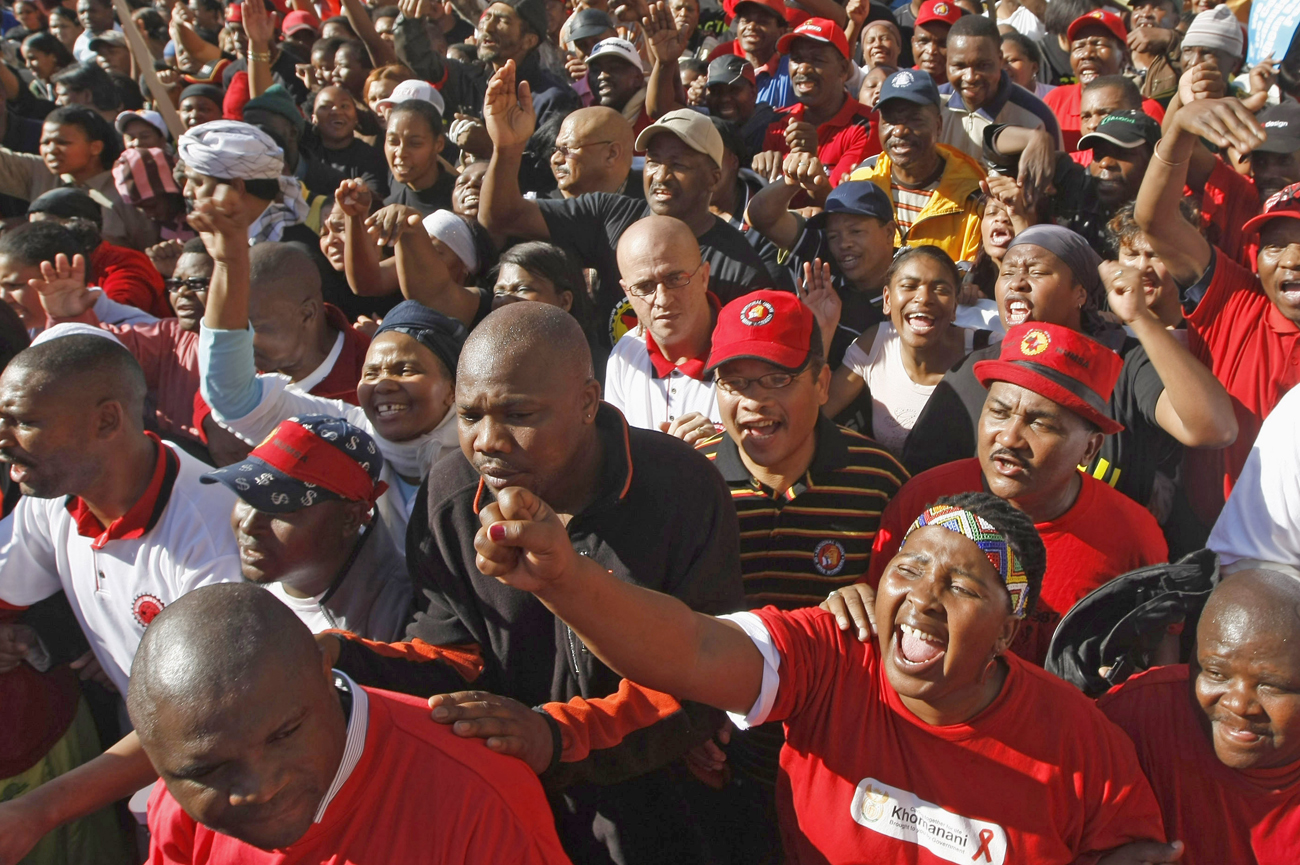 We’ve said before that Cosatu's Zwelinzima Vavi is a bellwether, someone who shows the way events are drifting before many others. He may not always be right, but he has a good track record. So it’s pretty damn interesting when he says that current events within the ANC “could plunge it into a an unprecedented crisis which may destroy the party”.

Now, don’t get too excited. He’s talking about a specific set of events that would need to happen and what he’s really doing is sounding a warning. This is about the fight back against Julius Malema and co. (Don’t you mean “Malema and Co. (Pty) Ltd” – Ed?). In his apocalyptic way Vavi is telling other ANC members they need to do something about the Youth League leader. It’s not really about Malema’s businesses, although that’s part of it. Vavi is saying that if a group, a “materialistic minority”, goes ahead with a vote of no-confidence in the leadership of the ANC at the party’s national general council in September, there will be massive “kak in die land”.

And it is about bloody time someone of Vavi’s stature and power said that. Because the ANC really cannot go through much more trauma at the moment. Vavi uses the word “unprecedented” and, yes, he’s a veteran of the Polokwane push, so he knows what’s he is talking about. And he is worried. He’s also pretty pissed off with the ANC for not publicly backing its own secretary general Gwede Mantashe, in the face of Malema’s relentless attacks on him.

At this week’s media conference, he was asked the question in a pretty neutral way: Would Cosatu back Numsa’s call for President Jacob Zuma to support Mantashe? He jumped in with both boots, saying it wasn’t just about Zuma, it was about the whole NEC and how they’d all been silent. That’s right, Vavi is again benefiting from being outside the tent. Smart move.

Cosatu was always going to back Mantashe in this; it’s just taken a while. Yet we can’t help but wonder if this is just the starting phase of the anti-Malema movement. Here’s our theory. If you’re Mantashe, you know that for every action you take, Malema will have a bigger and more over-the-top reaction. And, of course, there’s a World Cup coming. Malema on fire is something that the country and the ANC just don’t need. So you would use his own lifestyle against him first. Then, when Fifa graciously gives you your country back in mid-July, you would take more overt action. Malema could shout and scream all he wants, but you’ll have already weakened some of the ground he stands on. It’s just a theory, but we think that politics could start to get very interesting when Sepp Blatter leaves for his next harvest.

This is also why Vavi isn’t mentioning Malema’s name. If he does, Malema will go for him. But stand by for a moment when suddenly (“suddenly” in ANC time means all within the same week) some senior leaders start to talk about Malema by name. It will be orchestrated, arranged and probably pretty deadly.

But Vavi isn’t annoyed just at Malema and his ilk. Cosatu’s central executive committee is really, really, really, really disappointed in finance minister Pravin Gordhan’s budget. And being Cosatu, they’ve actually studied the thing so they can explain what they’re angry about. It hinges on the wage subsidy plan for companies hiring younger workers. They reckon it’ll create a third tier of workers employed with very little security. Then there’s economic policy, or inflation targeting if you prefer. And yes, they’re going to stay in the alliance, “but we don’t understand, we spend time convincing comrades in the alliance meeting, and then government makes a unilateral pronouncement”. They sound surprised. We don’t know why, because this is what’s been happening to them for years.

One of the definitions of insanity is to keep doing the same thing and expect a different result. You have to start asking questions when Cosatu says it’s “going to stay in the alliance because that’s the best way we have of making an impact”. Really? Head scratch here.

Something else that caught our attention was the strength of the language used about the ANC’s stake in Hitachi South Africa. You may remember this is the company with the R7 billion contract to build boilers for Eskom’s new power stations. Mantashe confirmed to Eyewitness News earlier this year that, yes indeed, the ANC does own 25% of Hitachi South Africa through its investment vehicle Chancellor House. Vavi put it like this, “We are going to meet with them (the ANC) and find out if this is the case. If it is true, then God help us all.” That’s right, and no, that’s not a journalist hyping up the quote, he actually said, “God help us all.” Now that’s the strongest reaction from anyone on this story. And we think there’s probably a clear link between the ANC’s cavalier attitude towards money in buying the stake, and young Julius’s approach to business. Why play the game properly if your elders and betters are showing you a more advantageous way?

All in all, Cosatu leaders must be feeling a bit like they did during the Mbeki years. Ignored on economic policy and pretty grumpy about some of the ANC’s leaders. But at least they have a line to the ANC leadership this time and some hope for the future. Or they think so. There’s still plenty to come on this. The reaction against Malema is going to be fascinating. And it looks as though it could be a tsunami that no amount of shouting and screaming will stop.