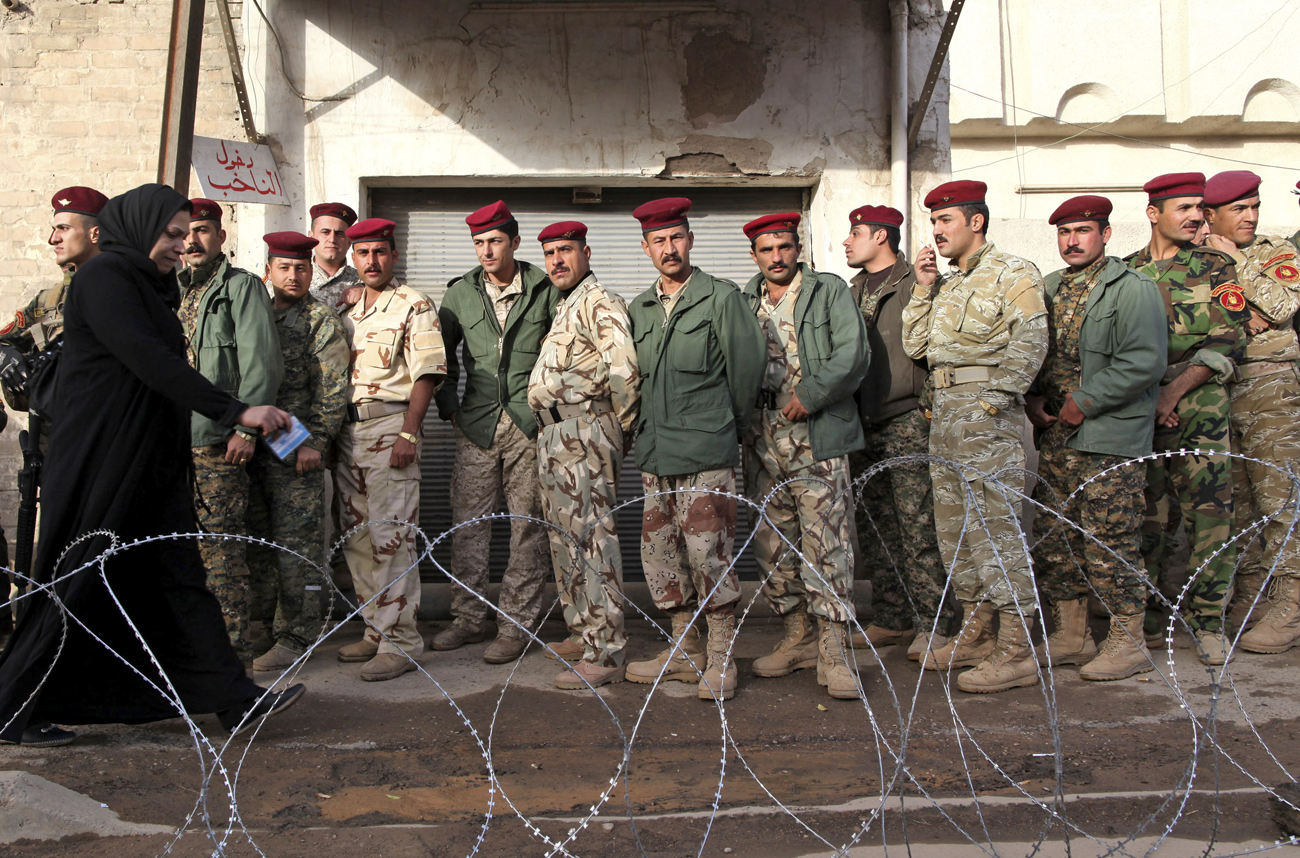 It’s not going to be a peaceful vote in Iraq, but people will still hopefully vote in droves. There have already been a series of deadly blasts and more can be expected ahead of parliamentary elections on Sunday. The poll will decide who will lead the chaotic nation through a slow withdrawal of US troops, and who has the best ideas for peace among the warring Shiites, Sunnis and Kurds. Preliminary rounds of voting have started for those who can’t get to the polls this weekend, including police and military who’ll be working on election-day. But dozens of people were killed by suicide bombers and rocket attacks. The victims were mainly thought to be security personnel, targeted to shatter morale among the 19 million or so Iraqis who’re eligible to vote. The nation’s suffered grievously over decades, and the violence seems endless, despite the move to democracy.

Photo: A woman walks past Iraqi soldiers queuing to vote at a polling station in Baghdad March 4, 2010. Iraqi troops, police, prisoners and the infirm began voting on Thursday, three days ahead of a parliamentary election seen as pivotal for a divided country which U.S. troops are scheduled to leave by the end of 2011. REUTERS/Ahmed Jadallah

The wannabe political superstar, Sarah Palin, showed up at a freebie promotional cosmetic and fashion event in connection with Oscar-week festivities, along with two daughters, her brother and a small entourage of Alaskan “red-necks”, to load up with personalised stationery, leopard-print wedge sandals and a slinky robe from Jenna Leigh lingerie. She’s in Los Angeles to perform a stand-up routine on Jay Leno’s “Tonight” show, and also made an unspecified, but “sizeable”, contribution to Red Cross relief for Haiti. She’s an analyst for Fox News these days, which just goes to show that Ronald Reagan’s B-movie star brand of US politics, which saw California Governor Arnold Schwarzenegger elected, has now become a mainstream political activity. We can’t wait for the next act. Israeli Prime Minister Benjamin Netanyahu says the country hopes to begin US-mediated peace negotiations with the Palestinians next week, a day after the Arab League endorsed indirect peace talks over the next four months. Netanyahu says direct talks are necessary to reach a lasting agreement, after the Israelis invaded the Gaza Strip last year in response to Hamas rocket attacks on Israeli towns and villages. But the Palestinians have refused to return to the negotiating table until Israel freezes all settlement construction in the West Bank and East Jerusalem – and that may not happen until hell freezes over. Palestinian President Mahmoud Abbas says peace won’t come to the Middle East without an independent Palestinian state made up of the West Bank and Gaza, with East Jerusalem as its capital. The preliminary discussions will chart the borders of such a state. If there’s agreement on this issue, the talks might move to direct negotiations.

The departing head of the United Nations mission in Afghanistan, Norway’s Kai Eide, says unless military strategy is balanced with politics, there’ll never be peace in Afghanistan. Eide says operations against Taliban and al-Qaeda insurgents need to be conducted in such a way it opens up the possibility of negotiating a peaceful solution with them. He didn’t describe how this might come about, as thousands of Nato troops and their Afghan allies began to restore government services after taking back the Taliban stronghold of Marjah, an opium-producing town of some 80,000 in the southern province of Helmand. Eide’s tenure was tainted by fraud-plagued presidential elections last year that gave Afghan President Hamid Karzai more control over the future electoral process. That’s not democracy and doesn’t include the enemy. So much more transparency is needed.

US President Barack Obama faces new problems after a House panel narrowly passed a bill declaring the killing of some 1.5 million Armenians by Turkey in 1915 as genocide. Obama tried to water down the bill, despite a campaign promise before he became president that such a resolution would be tabled. Now, the Turks are furious, and Prime Minister Recep Tayyip Erdogan said his country had been accused of a crime it did not commit. Ankara has recalled its Washington ambassador for consultations and says it is considering other responses. Turkey is part of Nato and a vital strategic ally for US interests in the Middle East and Afghanistan. So the resurrection of bad blood could stymie bilateral relations between the two countries and further complicate relations between Turkey and Armenia. Turkey holds a rotating seat in the UN Security Council, and may refuse to support a US call for sanctions against Iran over its nuclear ambitions. An earlier genocide resolution in 2007 never made it to Congress, following intensive pressure by then-president George W Bush. It’s amazing how politics works. The past is present and future. And everything goes pear-shaped.

Research shows humans are much more than just human

Scientists say there are more genes in the flora of the human intestinal system than the rest of the body, which means people are host to a second genome other than their own DNA. So now you can consider yourself a walking bacterial colony of about 100 times more microbial genes than human genes. There’re also 10 times more bacterial cells in the body than human cells, showing that humans live symbiotically with microbes that help digest food, provide vitamins and protect the body against invading pathogens. The aliens aren’t from outer space, they’re within us.

GOP makes fear and loathing part of the campaign trail

The Republicans embedded “fear and reactionary sentiments” in a 72-page PowerPoint presentation that was given to GOP fundraisers in Florida last month as part of a fundraising strategy. Barack Obama is “The Joker”, House speaker Nancy Pelosi is portrayed as Cruella De Vil, and another leading Democrat as Scooby Doo, as conservatives vent their resentment over not controlling the White House, Congress or the Senate. Republicans have toyed with the image of Osama-Obama in the recent past, implying he’s a non-American radical Muslim and enemy of the state. They also say he’s a socialist, after government took large shares in American corporations when markets crashed in late 2008, and over his views on all-encompassing healthcare for Americans. Both Republicans and Democrats use highly charged language to motivate voters and contributors, but it’s unusual for politicians to show their hand quite so publicly. They might as well have shown a slide of the president’s wife as a monkey, as appeared on the Internet. The joke’s on them, after mainstream Republicans tried to distance themselves from the presentation, saying there’s no place for this kind of thing in Washington. So Hollywood fantasy has indeed become embedded in US political life.