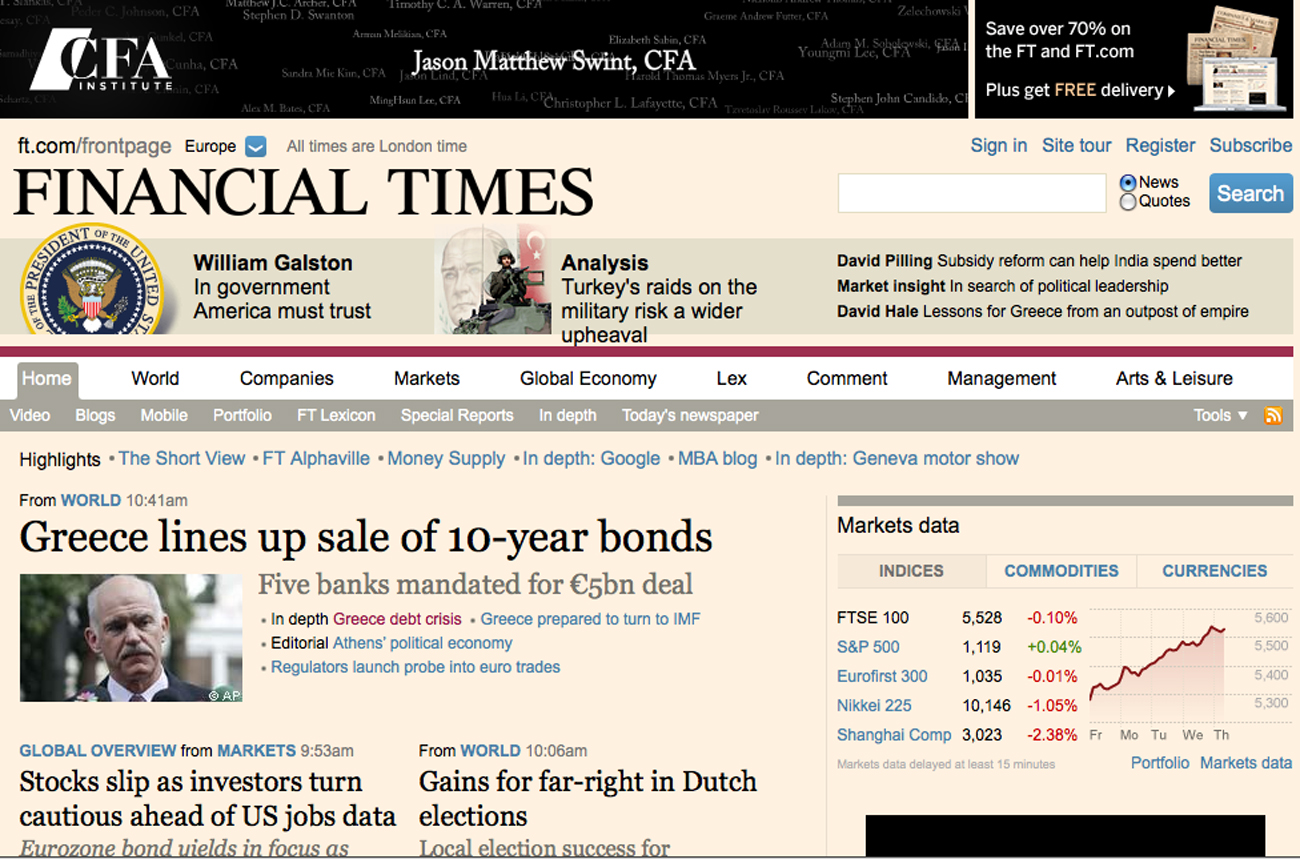 Annual results out of the Pearson media group reveal that despite a global slump in advertising, the Financial Times has posted a profit. The reason: a rise in FT.com subscriptions of almost fifty percent.

Well before the global economy tanked in September 2008, the Financial Times implemented a strategy that was intended to increase its ratio of online subscription revenue to standard advertising. The newspaper brand, owned by media group Pearson, rejected what has since become the defining tenet of the anti-paid-content lobby: if you charge for articles, you lose the “link love” that can pull thousands of visitors to your site, and you therefore lose the ability to charge advertisers for access to a large user base. The FT’s counter-argument was simply that subscribers, who can be better targeted, are a more valuable audience than an undifferentiated mass.

On Tuesday March 2, speaking after the unveiling of Pearson’s annual results, FT CEO John Ridding pointed to two factors that have helped his brand to profitability for the 2009 financial year: a 43 percent rise in FT.com subscription revenues over the previous period, and a 15 percent increase in paying online subscribers, to 126,000.

“Advertising alone is not going to sustain [the] scale of newsrooms,” said Ridding. “If you have an audience that is paying for your journalism they are engaged and that is an important message for advertisers.”

The remarkable thing about Ridding’s strong showing is that it’s come despite the fact that FT Publishing – the unit that contains the Financial Times newspaper, FT.com, half of The Economist and numerous other titles – reported a 12 percent drop in 2009 advertising sales, to £358 million.

According to industry Website paidContent.org: “In the last decade, FT Group has slimmed advertising from 52 percent of its income mix to 19 percent, and CEO John Ridding reckons direct content income will overtake that from ads by 2012.”

As its name suggests, of course, paidContent.org is an evangelist for the non-advertising revenue model. But is the FT’s success a sign that online pay-walls can save newspaper brands across the industry? Hardly. If anything, the FT’s success is a sign that people are willing to pay for exclusive online financial content, because they believe such content will give them a business advantage. Like state secrets, business information is a category of knowledge most people are traditionally inclined not to share – it’s content that’s almost antithetical to the idea of the link economy.

If non-financial content is going to exist profitably in a “walled garden,” it’ll have to have a lot in common with the sort of journalism the FT publishes. Excellent research and writing goes without saying, as does exclusivity: the content that sells will be the content people can get nowhere else. Still, “perceived advantage” is another issue altogether; whether a brand like the New York Times has it will only be revealed when it starts charging later this year.

Meanwhile, FT.com is looking to expand on its enviable position. It is going to extend the site’s payment options with a PayPal trial. Aside from subscriptions, readers will now be offered a micropayment menu – and the ability to view stories on a daily or weekly basis. There’s every reason to assume it’ll work beautifully.