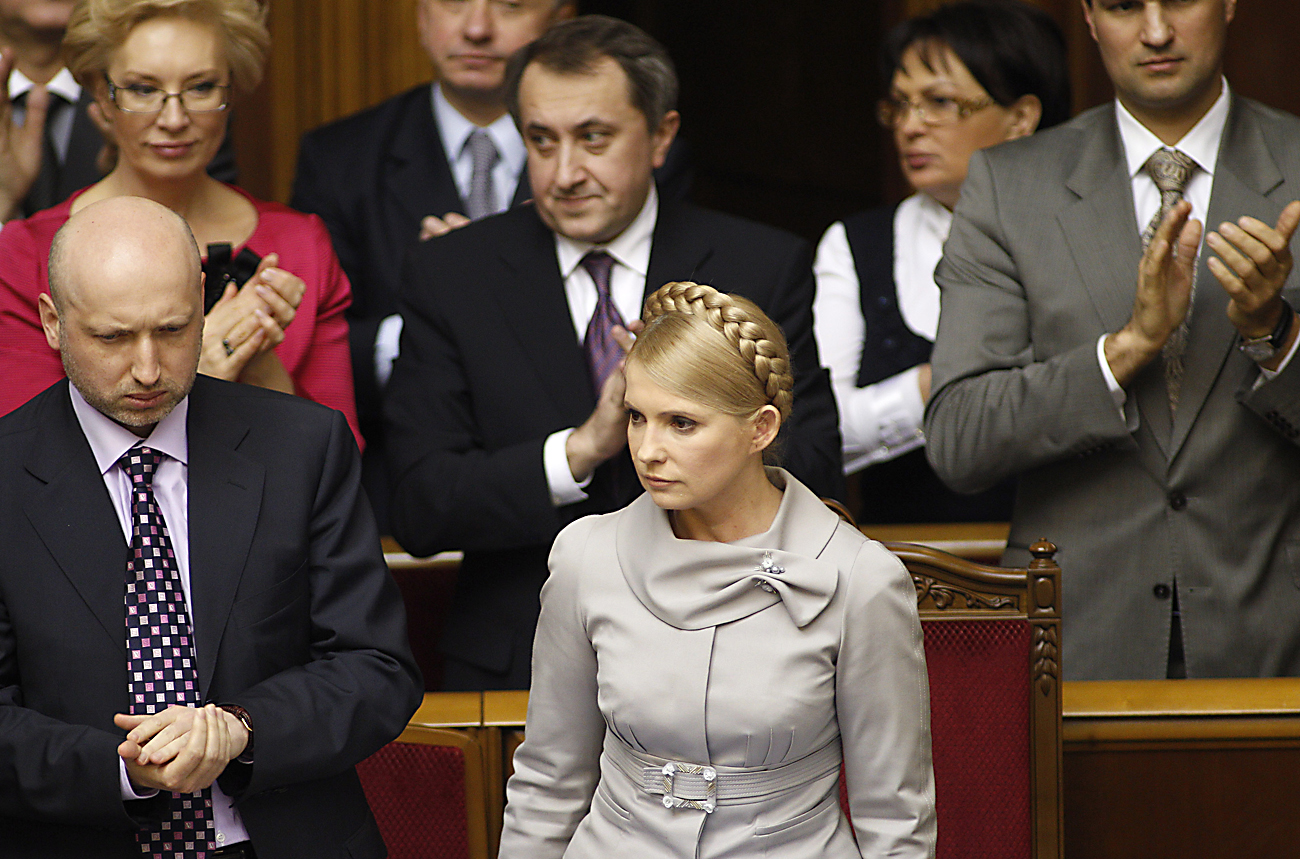 Ukraine’s Prime Minister Yulia Tymoshenko has been ousted by parliament, in a sea-change for the country’s politics after the inauguration of President Viktor Yanukovich last week. She’s one of the last of the Orange Revolution leaders to be booted from power, but will almost certainly continue to make her presence felt. Tymoshenko earlier said she intended to move rapidly to lead the opposition against the new government, which will be largely powerless until Parliament confirms a new cabinet, and that won’t come until a new coalition is formed in the divided country. Yanukovich leans towards Russia, while his Orange counterparts want to be part of Nato. The stalemate means it will take much politicking for cash to be released from the International Monetary Fund, to aid an economy that contracted 15% in 2009. There’ll be fireworks to come.

It’s a story reminiscent of children being invited to push buttons in the cockpit mid-flight, or driving on their father’s knee, and harks back to the time a Russian plane crashed when the son of a pilot took the controls. US officials are in a froth about how a child was ostensibly allowed to direct planes at one of the country’s busiest airports – New York’s JFK. The age of the child hasn’t been divulged, but he was apparently with his father, who is a certified air-traffic controller. The pilots didn’t seem to mind at all, and congratulated the boy for his professionalism. The Federal Aviation Administration took the opposite view and suspended the adult air-traffic controllers involved for their lack of it. Considering the child’s background, and seeing as how kids these days are expert video-gamers, it’s unlikely the limited and routine departure exchange with pilots would have endangered any lives. Far more was at stake when Ronald Regan summarily fired protesting air-traffic controllers all over the country way back in the ’80s, but nobody took him to task.

Pakistan’s security forces have retaken control of the Bajaur tribal area in the northwest of the country, seizing an extensive Taliban and al-Qaeda cave network that militants hide in along the mountainous border between Afghanistan and Pakistan. Last year, Islamic militants gave Pakistan’s government a torrid time in the nearby South Waziristan tribal area and Swat Valley, blowing up schools and killing with impunity. Now, thousands of troops are trying to hold on to the recaptured territory, and by finding the cave system, have killed and arrested some 500 foreign militants, including Egyptians, Uzbeks, Chechens, and Afghans. Pakistan’s divided intelligence services haven’t always worked hand-in-glove against the threat of a politically-complex insurgency. But recently they seem to have worked better with authorities, including the Americans, to damp down Taliban and al-Qaeda networks operating across the Afghan border.

Senior Greek government officials say they aren’t ruling out seeking help from the International Monetary Fund. The country wants to allay ongoing fears over its massive $270 billion debt, after earlier claiming that the problem was under control. The nations’ huge annual budget deficit of 12.7% has left the EU facing the prospect of bailing Greece out, while markets pummel the euro and destabilise the region as a whole. The government is under immense pressure from Brussels to formulate substantial economic reforms, after years of overspending. So, now it has announced deeper spending cuts and bigger tax hikes, worth some $6.5 billion, to deal with the country’s financial crisis. This includes slashing civil servants’ salaries, freezing pensions and cutting deeply into benefits and bonuses, while increasing sales tax on such items as alcohol, cigarettes, luxury cars, yachts, and leather goods. Coddled Greek workers have already been out in the streets over the cuts. Expect more trouble.

Arab nations say Palestinians can enter indirect negotiations with Israel for a preliminary four-month period, a decision which may see Middle East peace talks resume. The US had earlier offered to mediate between the parties, after Israel launched an offensive early in 2009 against Hamas in the Gaza Strip. That invasion has been the subject of UN war crimes investigations, and cast a pall over any potential Middle East peace. Now, the Arab backing has given Palestinian President Mahmoud Abbas the political credibility he needs to negotiate indirectly with Israel. The Arab League hopes to facilitate the US role in talks, which turns on the issue of Israeli settlement construction in the West Bank and east Jerusalem. Abbas can’t be seen to talk to Israel directly until the construction of such settlements ceases. The Israelis have temporarily stopped new construction in the West Bank, but haven’t frozen existing projects or construction in east Jerusalem. It’s the usual stalemate. And nothing will ever change until Hamas and Iran, among others, stop asserting that Israel be annihilated, and Israel, once and for all, stops building settlements – for ever.

It’s never too late for fresh beginnings, or sometimes not. But a thaw is appearing between climate scientists accused of hiding data, covering up errors and suppressing alternate views, and their corps of “amateur” critics. The battle has been vicious and has damaged any scientifically-valid work in the field. So, scientists at last seem to have accepted that they’re facing a crisis of public confidence, and have to engage their critics and reshape the way they work. But actual climate change is impervious to the frailties of human politics, so they’d better hurry up. A row over e-mails emanating from British researchers later led to allegations that a UN climate report used newspaper cuttings as scientific “evidence”. A spring thaw will be welcome, not least because the Earth doesn’t care about humans stamping and roaring on its stage. It just reacts to their folly.

Michael Foot, who led Britain’s Labour party, has died aged 96. He was elected Labour leader in 1980, succeeding Jim Callaghan, but exited politics after Margaret Thatcher beat him roundly in the 1983 election. The deeply left-wing Foot was in politics for 42 years, and largely admired by all around him. Thatcher eulogised that he was a great parliamentarian and a man of high principles, while current Prime Minister and Labour leader Gordon Brown described him as a man of deep principle and passionate idealism. Foot was known as a great orator, who wasn’t made for an era of sound-bites and 24-hour news. Those who knew him best describe him as someone of great integrity and honesty, and that’s why ultimate political success likely eluded him. He stood up for what he believed in, even if it made him unpopular.