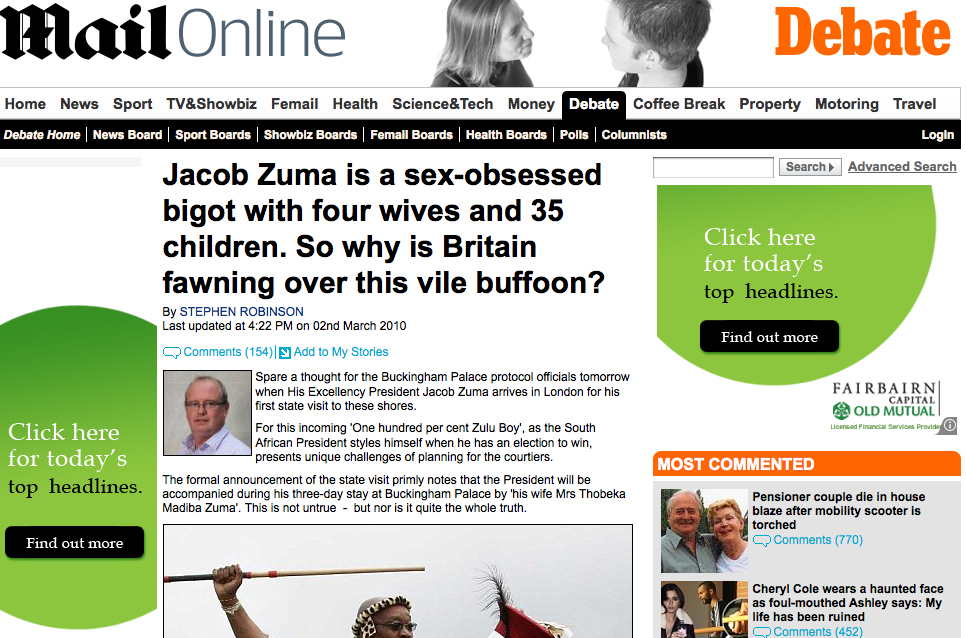 President Jacob Zuma has arrived in the UK for serious talks about serious things at a serious time. Unfortunately, the British press has other subjects on its mind: sex, wives and scandals.

Then again, the British press always has sex on its mind. But Zuma’s visit presents a tantalising prospect of combining diplomacy and sex, health issues and sex, social mores like polygamy and, you guessed it, sex.

Hence, the ever-delicate British press has refrained from the usual blaring headlines and indelicate innuendoes to focus of the deeper issues of diplomacy involved: “Jacob Zuma is a sex-obsessed bigot with four wives and 35 children. So why is Britain fawning over this vile buffoon?” asks a headline in the high-brow Daily Mail.

“JZ, as the populist 67-year-old leader likes to be known, is in dire need of some positive PR after a disastrous month in which he was castigated for promiscuity and then condemned after his security detail attacked a student accused of making a hand gesture at the presidential motorcade,” writes Daniel Howden of The Independent

Oh…kay, so it’s going to be like that then? Talk about focusing on the negatives!

Never slow off the draw, the ANC Youth League has castigated the British media, with spokesman Floyd Shivambu saying that British media seemed to have developed a habit of rubbishing Zuma and constantly portraying him as barbaric and of “inferior belonging”.

“It is quite apparent that the British media is one that is characterised and defined by the worst form of barbarism, backwardness and racism,” said Shivambu. “These British racists continue to live in a dreamland and sadly believe that Africans are still their colonial subjects, with no values and principles.”

Yet, these “cultural differences” are in fact causing a bit of a headache for the terribly formal British rules of royal precedence. No less a publication that the Financial Times carried a short piece in its gossip section discussing the “wife issue”, which is apparently providing all sorts of headaches for our diplomats.

Zuma is bringing only one of his wives and it is not wife number one. “So should she sit next to Prince Philip at the state banquet? Or will protocol put her down with, say, the Earl of Wessex?”

The big hope is that Zuma does not sing – something he is wont to do on major occasions. “I am told that his favourite song is: ‘Bring me my machine gun…’ Her Majesty would be hard pushed to be amused,” the FT notes.

Riiight. Well, let’s look at the issue from a different angle: the UK will not forget this visit for a long time. Come to think of it, George W Bush probably owes President Zuma a beer for erasing the embarrassing images of the Bush 2003 visit to the royal UK.