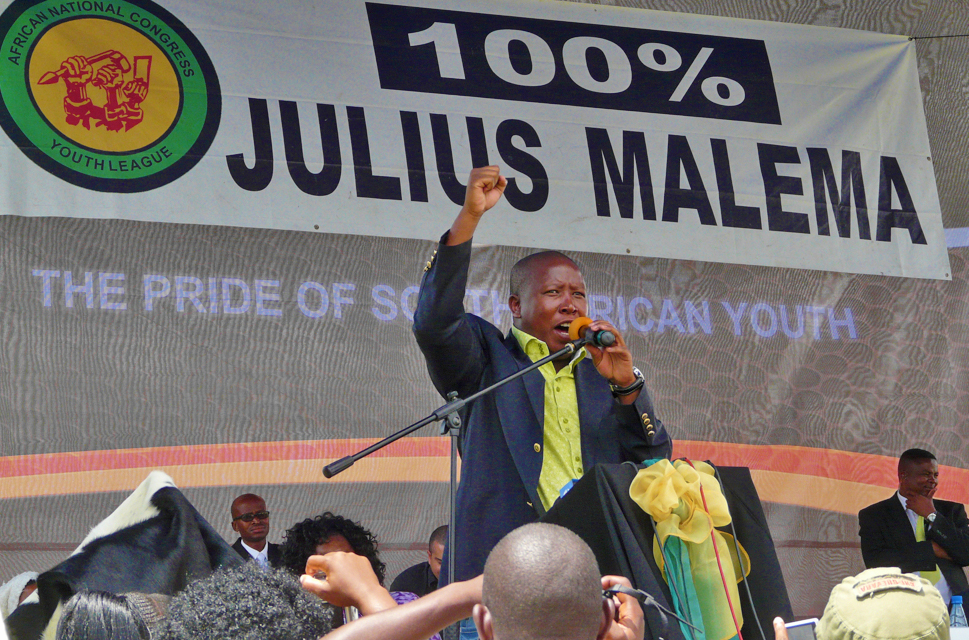 Once poor, always poor, ANC Youth League president Julius Malema told several thousand people who gathered in Seshego outside Polokwane to celebrate his 29th birthday. In which case, who was paying for the party, you ask? Good question.

Julius Malema was lauded as a comrade, a fighter, an anti-imperialist, protector of the aged and generally a guy with who you want to stay on good terms. Oh, and as the future president of the country. No wonder he was in fine form and high spirits.

In front of a home crowd, Malema he laid claim to his humble beginnings, and implied that neither money nor power would ever change him.

“I was made by the struggle of the poor,” he said. “I’m a product of a poor family, and I’ll remain humble before the poor.” Photo: Dear reader, you can very much make up your own photo caption here…

Malema had some choice words to say about the media, but that torch was primarily carried by Limpopo premier Cassel Mathale. And he came back to the theme again and again during his speech.

“Don’t sensationalise things in the name of media freedom,” Mathale told the many journalists at the event. “We don’t need that kind of media freedom.” Then he tore into City Press and, specifically, Piet Rampedi (who has done much of the investigative reporting around Malema’s business interests) – several times.

“What is your agenda, Piet Rampedi?” Mathale thundered, to generous applause. Then, however, he took equal time to stress that he has no time for praise-singing journalists either, and that Rampedi will continue to enjoy access and answers to his questions. Photo: Limpopo premier Cassel Mathale stressed that Malema will enjoy ANC support as long as he is a party member.

Mathale also made very simple the ANC’s relationship with Malema. He can count on unconditional support – as long as he remains a party member. If he should walk out in anger to form his own party, Mathale said in reference to Cope, “you must known that you walk alone with your jacket.”

Malema and the Youth League clearly went to considerable pains to avoid the obvious public relations pitfalls. Marshals managed to exclude, as best we could tell, 100% of children of school-going age (the party took place during the school day). Besides the shiny cars there were few obvious displays of wealth. Except in the largest sense. In the next week there will be many attempts to quantify the cost of the party; the stadium and equipment rental, the emergency services and police in attendance, the appearance fee for gospel superstar Rebecca Malope, the food for a couple of thousand of attendees, and the more sophisticated fare for the VIPs.

Who paid for it all? On the day the Youth League wasn’t in the mood to talk that kind of turkey. Perhaps we’ll have to wait for City Press’s Piet Rampedi to tell us. Photo: As he arrived, Malema’s smile was as wide as ever… Photo: … And then he was mobbed by his adoring fans.