A TT that keeps it real

A TT that keeps it real 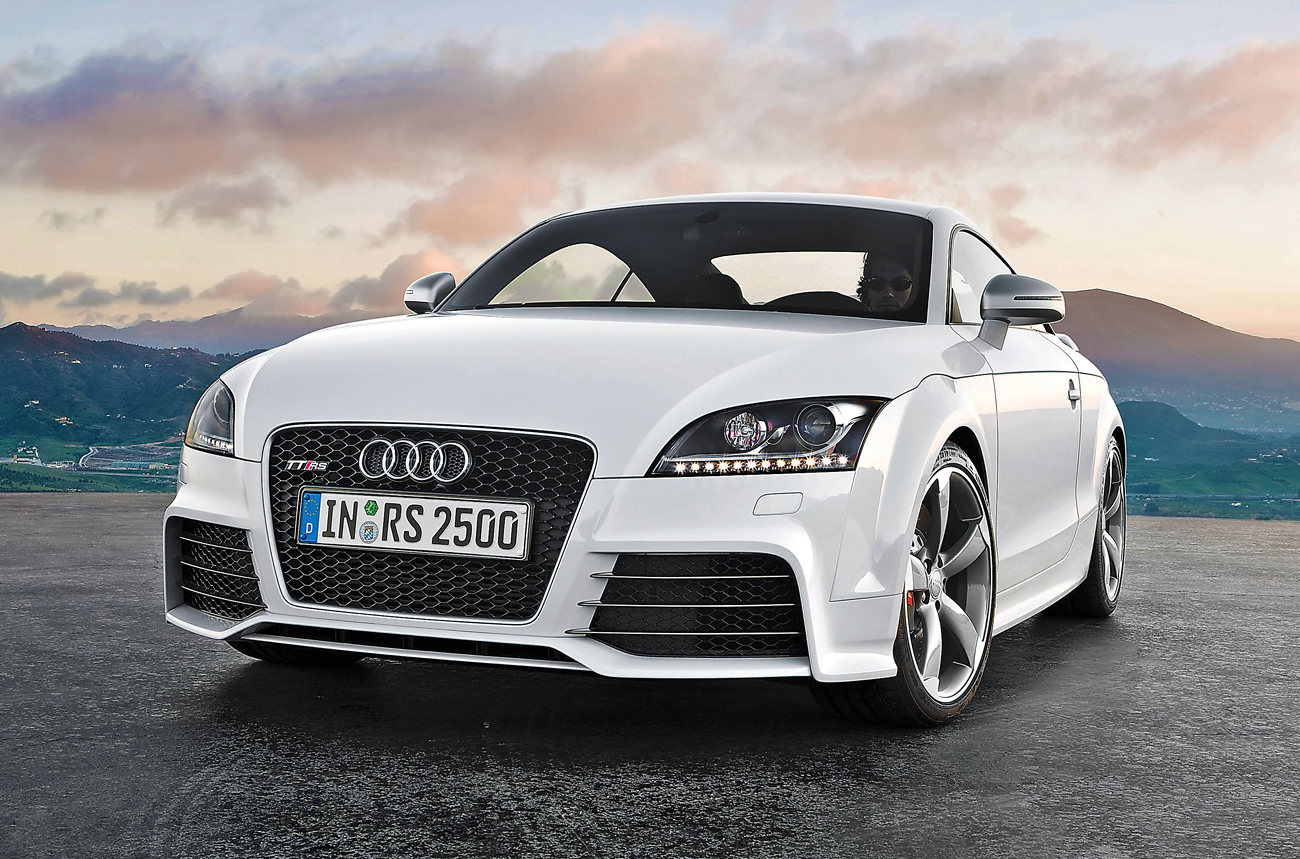 Let’s face it – the Audi TT is a pretty car. Almost too pretty. Beautifully executed, yes. Perfectly sculpted, indeed. Like Riaan Cruywagen’s hairstyle: crisply coiffed, but too good to be true. But now there’s a TT with a much more unruly, rebellious look. It’s called the RS.

You can’t mistake the RS for any common or garden variety TT. It’s the one with a permanent, contemptuous snarl, with the haunches of a prize fighter, with a rear wing big enough to cast a threatening shadow over the unsuspecting tarmac.

The big, forged aluminium wheels are barely contained by the Audi’s bulging fenders. The all-black abyss of the gaping grille is surrounded by the subtlest glint of brightwork.

Add the lower front spoiler, the deeper sills, and the gutter-sized exhaust tailpipes, and you have a sports coupé oozing muscle and aggression. And that’s before you start the engine.

Lifting the lightweight bonnet reveals a work of automotive art. For once, the in-line five-cylinder powerplant isn’t hidden behind a shroud of cheap plastic. Mounted transversely, it fills the standard TT engine bay from edge to edge, complete with crimson crackle-finish cylinder head. Of course, there’s a particular reason why the TT-RS has five cylinders at its dynamic disposal. Back in the 1980s, Audi and five-pot engines were synonymous. The off-beat burble of this mechanical quintet delivered a distinctive, if rather quaint, sonic signature.

But there was nothing quaint about the sound of the fearsome Audi Quattro S2 rally car. Designed to take on the insane Group B machines that plied their high-speed trade in the World Rally Championship, the Quattro was a fire-spewing, octane-snorting, low-flying beast.

Our own Sarel van der Merwe was one of the very few that could tame the creature. And yes, it too was powered by a five-cylinder turbo engine, albeit with a few hundred horses more than the 2,5litre aluminium lump in the nose of the TT-RS. But the lineage, the heritage, is obvious enough.

Prod the loud pedal, and there’s a growl from those oval exhausts. It’s a surprisingly understated sound, but one saturated with menace. Let the revs rise a little higher, and rumble turns to roar. This is going to be good!

Even Joburg’s anaemic oxygen levels can’t constrain the TT-RS when it’s unleashed from the starting blocks. There’s the slightest suggestion of lag, as you slip your foot off the clutch and hammer the alloy accelerator to the floor. And then all hell breaks loose.

With all four wheels clawing the tarmac, there’s no wheelspin – only the slam of drivetrain taking up what little slack there is. And then, the mad rush towards the horizon starts.

If anything, Audi’s claimed 4.6-second sprint time for the classic 0-to-100 dash feels conservative when the steering wheel is squirming between your palms, and the slipstream is a speed-induced crescendo, muted only by the rising wail of that marvellous, magical powerplant.

Gear changes are short, sharp, percussive interludes, only momentarily interrupting the linear push of power. And we haven’t reached the first corner yet!

The TT-RS may be startlingly quick in a straight line, but its real talents are to be found in the twists and turns of a mountain pass or the curves and corners of a racing circuit. Quattro all-wheel drive used to be a monster of induced four-wheel understeer. But here, it simply provides huge levels of grip, letting the RS tidily toe the chosen line.

The steering has just the right feel and weight, rewarding precise input with instant response, while highlighting the two-door Audi’s agility. No corner is too tight, no sweep too fast – at least not until the driver runs out of courage or talent – or both. A sport button in the centre console allows the exhaust system to clear its throat with a bit more conviction, and should be switched on by default. It also sharpens the throttle and invokes a less intrusive stability control programme that allows some mild oversteer before intervening.

You can also get rid of the stability control safety net completely, but in reality, the TT-RS has so much traction, and the chassis feedback is so unambiguous, that you’d have to be an imbecile to let it get away from you. My biggest complaint? Like all Audis, the TT-RS vehemently opposes left-foot braking.

Best of all, there’s a constant, confidence-building dialogue between car and driver. It’s a conversation that can get loud and raucous, with even a smidgen of dissent thrown in. But mostly, it’s a give-and-take discussion of mutual commitment, and mutual reward. Yes, this is an immensely satisfying car to pilot.

We could tell you more about the nicely kitted out interior (and the costly extras that, at this price level, should come as standard). We could confirm that it has a long list of active and safety systems, from multiple airbags to advanced stability control.

But frankly, we wouldn’t buy the TT-RS for its surround sound, its navigation system, or its aluminium inlays. We wouldn’t even buy it for its rebel-without-a-cause styling, or its lurking, menacing presence.

We would acquire the TT-RS only for those days that we could spend rushing up and down the many marvellous mountain passes this sub-continent has to offer. To savour the G-forces, to revel in the roar of the exhaust. To immerse ourselves in the sheer, velocity-drenched occasion of it all.

That, after all, is what owning a proper sports coupé is all about. And the Audi TT-RS is just that: a real sports car.

*Watch the TT-RS on this week’s episode or RPM TV on SuperSport. Broadcast times on the RPM TV website at www.rpmtv.co.za.