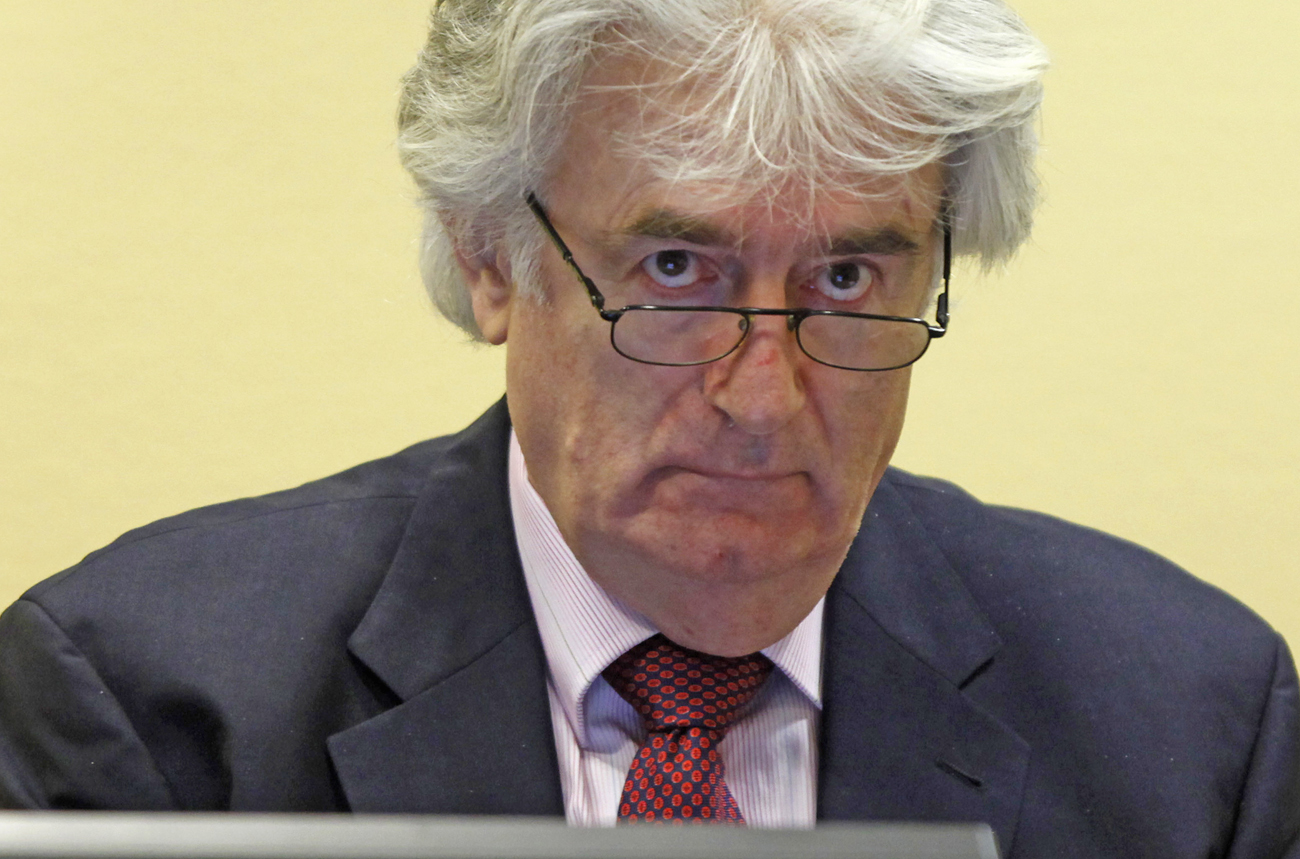 Bosnian Serb leader Radovan Karadzic, facing charges at the International Criminal Court in The Hague over the 1992/95 war in Bosnia, says he was simply protecting his people against a fundamentalist Muslim plot. The so-called plot led to the mass murder as many as 8,000 men and boys in the town of Srebrenica in the war that brought the deaths of about 100,000 people. He claimed Bosnia’s Serbs were under physical attack by Muslims, who rejected power-sharing proposals and wanted an Islamic republic in Bosnia. He also said the Muslims’ bloody prosecution of the war led the Serbs to behave as they did. In 14 years, he’s the most senior person to appear before the international tribunal, after former Serb president Slobodan Milosevic died in his cell before a verdict was reached. Photo: Reuters.

Tsunami warnings end up being more of a belly-flop

The 2004 Asian tsunami brought it home to everyone. Even hundreds of villagers on the north-east African coastline were killed by an unusually high tidal surge. So Chile’s magnitude 8.8 earthquake was followed by oceanographers issuing warnings to Hawaii and other Pacific islands that a killer wave was heading their way. What happened? Precisely nothing, leaving tourists to go back to the beaches and restaurants. Scientists later acknowledged they’d overstated the threat, but said they took the proper steps after the Indonesian tsunami killed more than 230,000 people. Their warning to 53 nations prompted hundreds of thousands of people to flee coastlines in Pacific Rim countries. In Hawaii, it was Pearl Harbour all over again as emergency sirens blared all day, and residents hoarded goods in anticipation of a major disaster. Some five people were killed by a tsunami on Robinson Crusoe Island off Chile’s coast, and huge waves battered the port city of Talcahuano, near hard-hit Concepcion. Nothing more, luckily.

The damage from Chile’s earthquake could exceed $15 billion. That’s huge, despite a relatively small death toll. In Haiti about 200,000 people were killed. In Chile, so far 723 deaths were reported, although nearly half-a-million houses were flattened. There’s a curfew in the badly damaged city of Concepcion, the country’s second-biggest city, as troops try to prevent looters running amok. Residents say security is deteriorating and the government is slow to deliver aid, while criminals become ever better organised into gangs. Outgoing President Michelle Bachelet dispatched 7,000 troops to the region, but people say it’s not enough, and that they’re protecting their properties themselves. The new government of Sebastian Piñera will find itself governing the clean-up of a natural and social disaster.

They take their sport seriously in a resurgent and increasingly nationalistic Russia. President Dmitry Medvedev says sports officials should step down after Russians won only 15 medals – including three golds – at the Winter Olympics in Vancouver. That’s a real turnaround from the days of finely-honed Soviet athletes cleaning up the medals table, and way below the targeted 30 medals and a top-three finish in the 2010 Winter Games medal standings. Instead, Russia placed 11th for golds and sixth in the overall medal count. Medvedev said on television that if officials don’t stand down, the decision will be made for them. Even in post-Soviet Russia, the country never finished outside the top five in the medal standings – until now. At the 1994 Lillehammer Winter Games in Norway, they took 23 medals, including 11 golds. And for 30 years before that, they pretty much topped the medal count. Predictably, Medvedev moaned that Russia, “Has lost the old Soviet school”. The country’s sports minister claims that new sports such as freestyle skiing aren’t taken seriously in Russia, showing just how conservative the Russians really are. But it was the doping bans imposed on several leading medal contenders that did the once-proud nation in. And nobody mentioned that’s what defined the “old Soviet school”.

Greece must make tougher budget cuts, according to top EU financial officials, as fellow European countries prepare a bailout package for the country; its role is to stave off a default that would hurt the euro and threaten European banks that hold Greek government bonds. The EU wants Greece to lower its annual budget deficit from a soaring 12.7% to 8.7% next year, but that’s still way above the bloc’s 3% limit. How the European Central Bank and the International Monetary Fund managed to stay blind to years of profligate spending by Greek authorities, especially during the 2004 Olympic Games, is anyone’s guess. But they’ve laid the blame for the crisis squarely on Greek shoulders. Such is the potential fallout of Greece not meeting its debt obligations that state-owned banks and bond investors in France and Germany will likely buy as much as $41 billion in Greek bonds to help the country meet some $27 billion in debt repayments by the end of May.

It still helps to have impeccable revolutionary credentials in China. But it’s the Internet era that’s taken such heroic populism to new heights in state media. The People’s Daily newspaper named Chongqing Communist Party boss Bo Xilai “Man of the Year” in an online poll, after he targeted gang leaders and corrupt police in the booming Yangtze River city. He saw to it that dozens of law enforcement officials were arrested for collusion with criminals, a common happening in a society that enables those with “connections” to make a pile. Bo is so popular, that he’s also been lionised in a homemade music video that popped up on the Internet last month, praising him as someone to count on. Now, Bo needs to impress at the upcoming National People’s Congress to set himself up for a leadership role in 2012, when most of China’s current leaders are due to retire. It’s not quite stars-and-stripes-style politics in China, but it is pure John Wayne.

The US Supreme Court avoided a difficult decision over whether detainees released from Guantanamo Bay can be settled in the US, by dismissing an appeal from seven Chinese Muslim detainees who’ve been offered another place to live. Prisoners who’re considered too dangerous to be freed, could possibly be released in the US if President Barack Obama’s promise to close the infamous prison in Cuba is fulfilled. The detainees had asked a US high court to rule that federal judges have the authority to release detainees into the US when they have no place to go, after a 2008 court ruling allowed Guantanamo prisoners to challenge their imprisonment in federal courts. The case is now under appeal.

He’s a fish out of water in the cut-and-thrust of Egyptian politics, but that didn’t stop Cairo crowds giving former chief of the International Atomic Energy Agency and Nobel Peace Prize laureate, Mohamed ElBaradei, a hero’s welcome. ElBaradei’s arrival home after years on the world stage has rattled the Egyptian leadership’s long hold on power. Now the question on everybody’s lips is whether he’ll run for president. The media has trumpeted his call for the people of Egypt to advance political freedoms, a highly provocative stance in a nation where dissent is barely tolerated. The ex-IAEA boss says only free and fair elections will allow Egypt to fight its deep-seated social and economic problems. Trouble is, his support for now seems only to be among intellectuals and young people, and observers question whether he’ll be able to broaden that appeal.