Deep in their trenches, US Democrats and Republicans tr...

Deep in their trenches, US Democrats and Republicans trade mortar fire at highly public healthcare summit 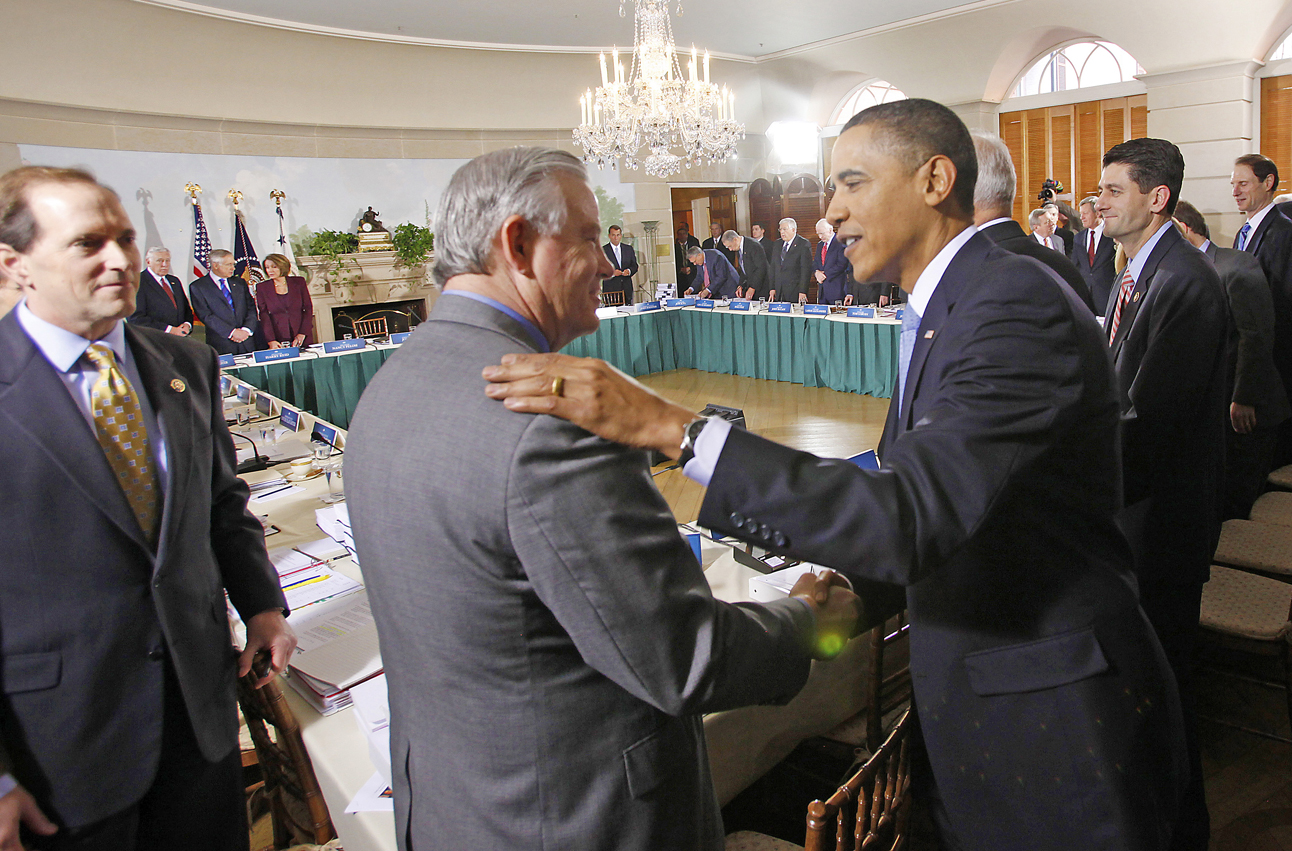 A nearly unprecedented, full-day televised debate over healthcare reform locked Barack Obama and Republican congressional leaders together in one room for more than seven hours. After it was all over, nearly everybody agreed that virtually nothing had really changed, but the game was still far from over for healthcare reform.

President Barack Obama, vice president Joe Biden, some three dozen Republican and Democratic congressional leaders and key Obama administration figures met at Blair House, the White House’s VIP guest quarters, directly across the street from the White House on Thursday. The entire gathering was tightly packed, virtually shoulder-to-shoulder, around a hollow square table for the whole day. In contrast to usual practice, there was no podium or raised platform for the president to speak from, though the national and presidential flag, and an ornate fireplace were arrayed behind him – a warm but presidential image for television. The session ran without those customary coffee breaks to schmooze, though participants finally caught a break to get some lunch.

The American public affairs cable channel, C-SPAN, broadcast the entire event and the news operations of the various cable networks and PBS (the American public broadcasting network) made the summit the focus of their whole broadcast day with frequent reports and crossings.

Late last year, healthcare reform passed the house and senate in separate (and somewhat different) versions, but final passage has since been prevented because Democrats were no longer able to force an end of debate in the senate after Republicans won the late Ted Kennedy’s senate seat. To shake things up and, at least potentially, break the deadlock, Obama challenged congressional Republicans to join him in a no-holds-barred colloquy over healthcare to seek out the possibility of compromise. Democrats hoped the meeting might be a “game changer”, especially if public pressure grew after Obama, himself, made the case for healthcare reform, in contrast to the confusing congressional debate throughout 2009.
In the war of words leading up to the debate, Republican leaders at first mulled over skipping the event, calling it a publicity gimmick. After it became clear the public wasn’t buying this kind of intransigence, that position became untenable and they demanded Obama and the Democrats start over, without preconditions. In response, the Obama administration generated an 11-page document (in contrast to the 2,000+ pages of the congressional measures), setting out Obama’s key principles for healthcare reform making it the core of a new website that heralded “the president’s proposal”.

In the actual session, Obama and the Democrats kept up a drumbeat for common ground with Republicans that could lead to passage of healthcare reform. By contrast, Republicans sitting shoulder to shoulder (figuratively and literally) tried to focus on the cost of healthcare reform in face of growing government deficits – their old chestnut of the need for malpractice litigation reform (a.k.a. tort reform) and their opposition to a so-called “federal takeover” of the health sector. On cost, for example, Republican senator Lamar Alexander challenged Obama on the increased cost of insurance premiums from the Democratic legislation, provoking a sharp “You’re wrong” retort from Obama. Both sides drew on the non-partisan congressional budget office to support their positions. The CBO has said insurance costs could be 10% to 13% higher in 2016 under the Senate legislation, but such policies would cover additional medical services and about half the country could qualify for government subsidies to defray those new costs.

Vice president Joe Biden scored a point during the debate when he noted Republicans could no longer claim they disagreed with any kind of federal government role in healthcare management when they were advocating tighter insurance company regulation by the government and abolishing annual and lifetime caps on benefits (a key insurance issue for severely ill people). A major Republican argument has been that the national government should not be involved in managing national healthcare, even though it already effectively runs a major share of the industry through Medicare, the health plan for the elderly, or through Medicaid, the health plan for the poor.

Although the day-long debate clearly did not produce agreement, it did generate potential new ideas that might attract bipartisan support down the road. Besides the controversial reconciliation approach to skirt a threatened Republican filibuster during final debate by making a vote on a house-senate compromise bill the subject of a budget reconciliation rather than on a substantive measure, they may now try to find a series of compromises that add Republican ideas to the pending measure, thereby peeling off a few Republican supporters to back a refashioned measure. One approach might be to take this huge bill, break it into its constituent parts and attempt to pass them one by one until the overall goal is more or less achieved. For example, a bill to repeal the insurance industry’s exemption from federal antitrust laws already passed in the house by an overwhelming 406 to 19.

Republican senator Tom Coburn of Oklahoma has suggested using undercover regulators to pass themselves off as patients to detect doctor and hospital fraud to bring down the overall cost of any reform package. (This could be interesting: how do you fake a heart attack or a broken leg?) Democrat Charles Schumer called this a “great idea” and Obama said he would be happy to explore it further as well.

Some Democrats were officially positive about the outcome of yesterday’s debate. Congressman George Miller said the debate could eventually produce a better measure and that, “You have to go hunt for the votes. But you have to have a product.”

One key problem for the Democrats is that they remain divided on the road ahead themselves. Unlike parliamentary systems, American legislators are not required to support party positions, and Democrats are less united than Republicans. As Democratic congressman Jason Altmire, one of 39 who originally opposed the measure, said, “I don’t see very many at all who voted no, who are going to switch their votes unless there are substantial changes in the bill.” Obama’s task is complicated by the fact that the so-called public option of low-cost health insurance is no longer in the measure, irritating liberal Democrats.

Nonetheless, if the televised debate did anything for Obama, it brought healthcare back to centre stage, reasserting an appreciation for the importance and gravity of the issue in the public mind and underscoring the fact that Obama is trying to find an island of agreement between the two parties.

Following the debate, the White House says it has some decisions to make, some choices to consider. Indeed it does. Democratic senator Richard Durbin said after the meeting, “If nothing comes of this, we’re going to press forward. We just can’t quit. This is a once-in-a-political-lifetime opportunity to deal with a healthcare system that is really unsustainable.” But this will need the kind of unity of purpose among Democrats that has been extremely hard to achieve over the past year on healthcare reform – even without the added pressure of executing a tricky parliamentary measure.

For Republicans, they must face the question among themselves as to whether a continuing, united opposition to any form of reform will become a public liability in the run-up to the mid-term election this year, especially after Obama’s gesture towards bipartisanship. Polls say that while the American public remains suspicious of wholesale healthcare reform, they are also increasingly concerned about “partisanship and gridlock” at the national government level.

With congress entering a 2010 session that will inevitably be affected by the mid-term election, the fat lady is still in the wings, warming up her voice.

For more, read the New York Times, the Washington Post, the AP and the Christian Science Monitor