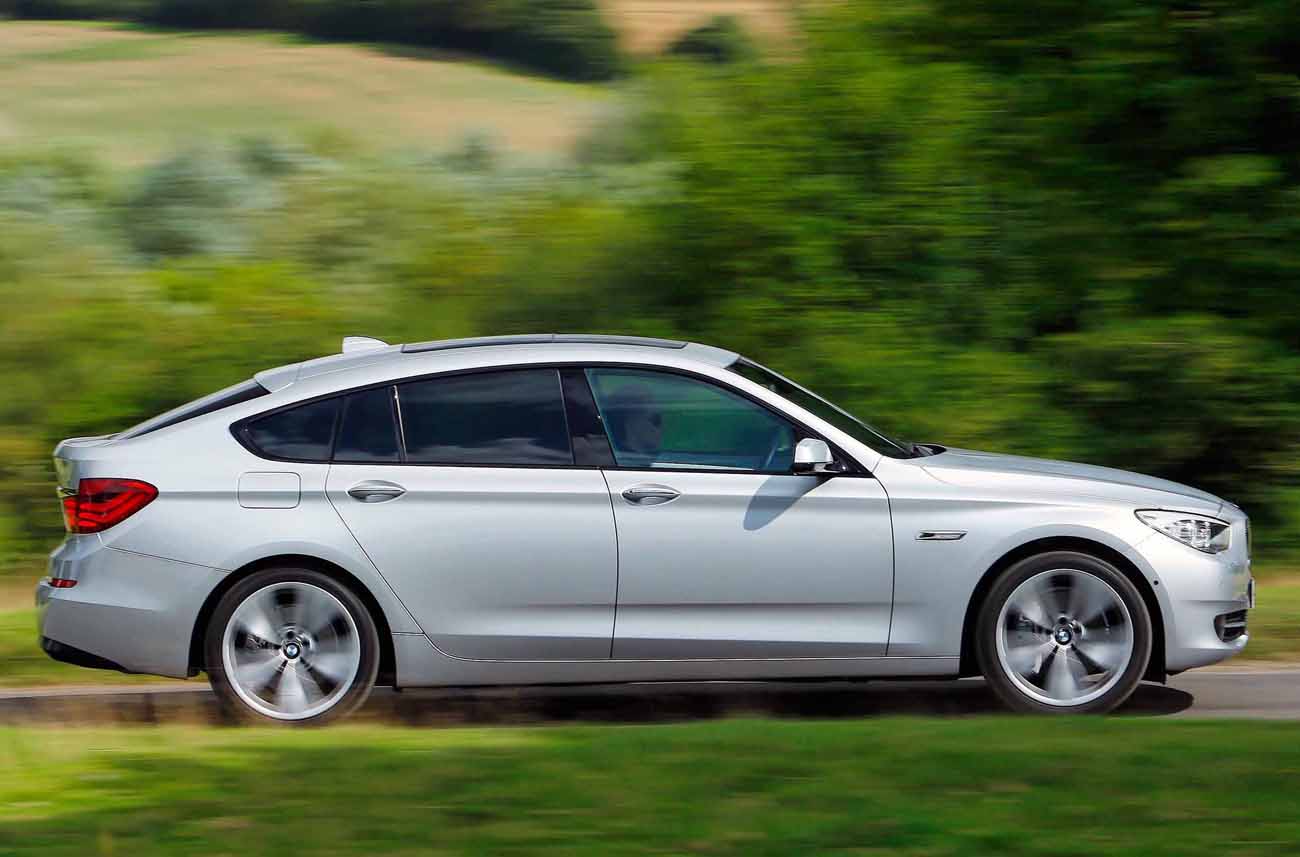 Little more than a decade ago, BMW’s model offering consisted of just four choices: the 3-Series, the 5-Series, the 7-Series and the Z3. Today, the Bavarian auto maker’s line-up has expanded substantially, and includes the 1-Series, the 6-Series, the X3,the X5, X6 and the Z4. There’s also an X1 on the immediate horizon. But right now, its freshest offering is this car: the 5-Series Gran Turismo.

BMW claims the Gran Turismo has created a completely new motoring category – a niche that  combines the space and luxury of a 7-Series sedan, the presence and individuality of an X6, and the utility and versatility of a large hatchback.

It sounds like an impossible combination of virtues, and one that would result in a very odd-looking car. Certainly that was the impression we got when we first read about the new Beemer, and saw the initial images. But the reality is quite different: in the metal, the 5GT intrigues rather than dismays, and its bold lines seem more balanced and cohesive than expected.

The rear is the defining element of the new BMW 5GT. It dictates both purpose and appearance. The rear screen arcs down towards the bumper to create a look we used to call a fastback back in the Seventies.  But the real surprise is the function behind that form: it combines the dual functionality of a boot lid and a tailgate in single ingenious design.

That one, intelligent virtue almost transforms the 5GT into two completely different cars. Use the boot in the conventional way, and it becomes a stub-tailed, slightly unusual sedan. Lift up the entire tailgate, and the impression is of a large and very unusual hatchback. Whether it succeeds aesthetically is a matter of personal taste. It’s certainly imposing, individual and unique in a world where cars are either sedans or SUVs.

The front previews the blunt, aggressive approach this GT shares with the upcoming, all-new 5-Series sedan. The high waistline, narrow side glass and sculpted flanks suggest dynamic prowess. And the big wheels add substance and authority.

Most of all, this is a big car, more akin to a Seven than a Five, with a presence that turns heads and attracts admiration. Wherever you drive, people stop and stare.

Big is also the best description of the 5GT’s interior. In fact, the cabin is more akin to that of the Seven, than the new Five. And it’s particularly impressive at the rear, where  the individual seating positions can be separately adjusted to provide tailor-made comfort and luxury.

However, the cockpit layout confirms that the 5GT has also been designed to be a driver’s car, with ergonomically designed switchgear ensuring intuitive control, despite the busy fascia and plethora of buttons and switches.

Those familiar with BMW’s current products, especially the latest Seven, as well as the X5 and X6, will feel instantly at home. Elements such as the i-Drive controller, the gearshift lever and the heads-up display are identical.

The elegant treatment of the instrument dials, and the top-grade materials also serve as a reminder that the 5GT is, first and foremost, a premium car. Of course, the options list is a long and exhaustive one, allowing purchasers to tailor their specific version to suit specific tastes and priorities.

At least practicality is one aspect that comes as standard, thanks to that large heavy tailgate. Opening it provides a massive aperture through which the equally massive cargo space can be conveniently accessed. Or you can use the normal boot to slip in  smaller items.

Need more space? Then fold the rear seats forward to create an flat-floored expanse that will make most bakkie owners blanch. Not sure what your typical 5GT owner will shove into that space, though  …

With so much cargo carrying  potential the 5GT needs ample power. Not surprisingly then, the engine choices on offer in the 5GT include a 4,4-litre turbocharged V8, a 3,0-litre straight-six turbo petrol and a three-litre turbodiesel.

We drove the 530d, which combines 180kW of muscle with a 540Nm torque peak. That urge is delivered to the rear wheels in  traditional BMW road car fashion, via a seven-speed Steptronic automatic gearbox.

It’s a fine, smooth-running unit with little of the expected diesel clatter, and a throaty, sporty roar when pushed that’s far removed from the world of heavy trucks and tractors. It also has tremendous midrange shove, which is great for overtaking, and it just happens to be more frugal than its petrol cousins too.

The good news is that neither the size nor the mass of the 530d GT can blunt its ability to deliver satisfying driving dynamics. It sprints from zero  to 100km/h in an impressive 6.9 sec, and has a top speed limited to 240km/h.

Quite astoundingly, the quoted average fuel consumption figure comes to 8,9 litres/100 km, although our rather more enthusiastic driving, including winding the car through the corners and hairpins of the Rooiberg and Burgers passes between Montagu and Worcester, made a mockery of that claim. In the real world, 11  litres/100 km is a more likely figure.

That’s vital, because besides its other talents, the 5GT also expresses a certain dynamic promise – one that is very much a part of the BMW brand identity.

And besides, while its straight-line speed talents are admirable, the road manners of a car are what define the overall driving experience.

For all its apparent bulk and presence, the 5GT feels more wieldy and agile than you’d expect. Give it stick through some twists and turns and the car seems to shrink around you, while the controls come alive, providing decent levels of feedback. It’s only under heavy braking that you realise how heavy the GT really is! Big disc brakes provide reassuring retardation.

The suspension finds a good compromise between comfort and response, while an active damping system allows on-the-fly adjustment, with settings that vary from comfortable to sporty. The steering and throttle response are tweaked at the same time, ensuring the GT is able to meet its drivers’ varying requirements at the push of a button.

We’ll be the first to admit that we didn’t think much of the 5GT concept when BMW revealed the images. It’s become fashionable to create crossover vehicles to fill niches nobody knew existed, and we felt that the 5GT was a car only the Bavarians felt we needed.

But in the metal, and behind the wheel, the 5GT delivers an unusual and individual driving experience. Would we buy one? Not really: our preference is for smaller, wieldier – and especially more affordable – vehicles.

But for those seeking the space, luxury and versatility of a top-end SUV, without the sheer size and profile such vehicles command, the 5-Series Gran Turismo may well be the most compelling, most sensible and certainly most unusual alternative.