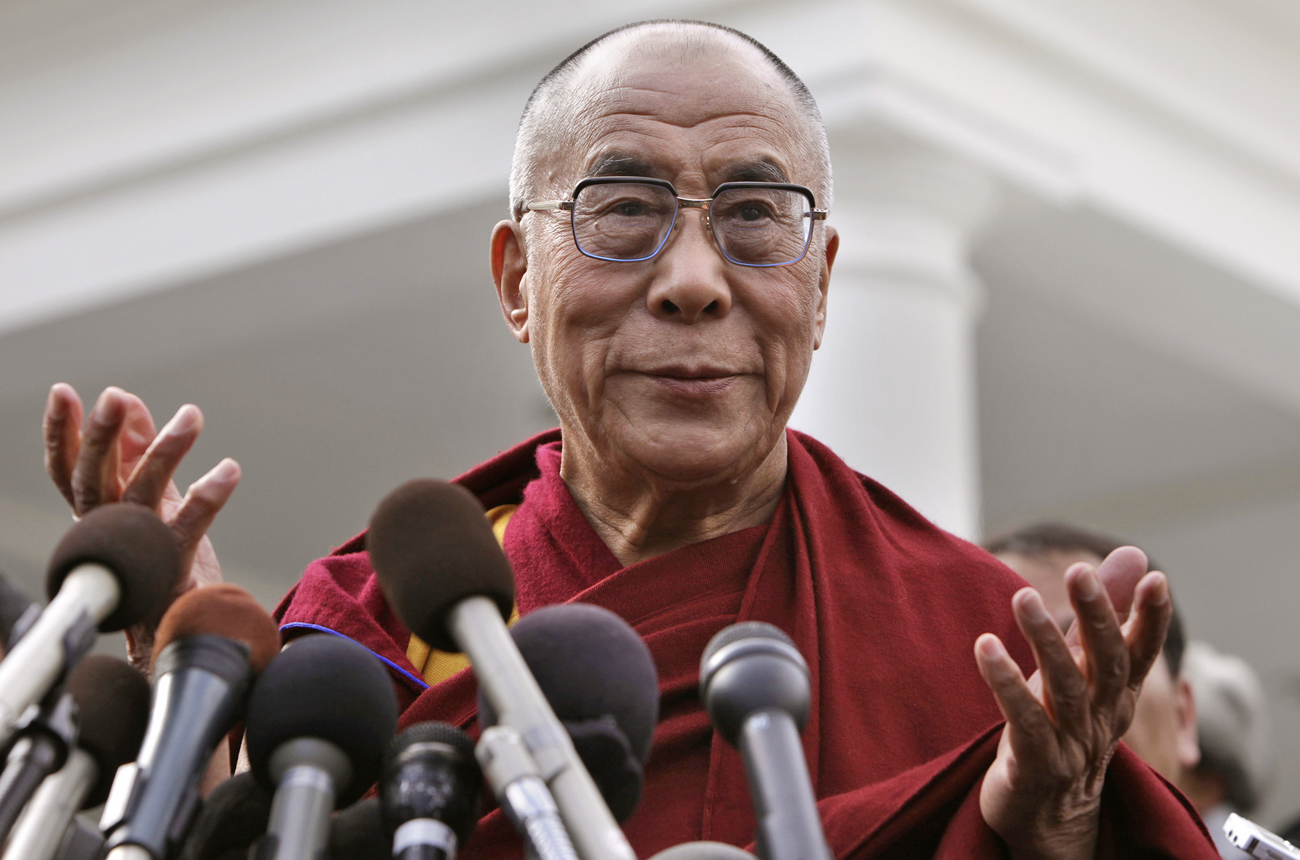 US President Barack Obama met the Dalai Lama on Thursday and praised the spiritual leader’s goals for the Tibetan people. But the meeting was very, very carefully arranged to keep it a low-key, media-lite affair to lessen the chances it would further irritate Chinese sensibilities. As a result, the Obama-Dalai Lama meeting became the most publicly private meeting that has taken place in Washington in a long, long time.

After first postponing a scheduled meeting between the two men prior to Obama’s China trip last year to avoid unduly provoking China, the US president finally met the world’s best-known genial bald guy with his beatific smile, gentle giggle, professorial glasses and trademark red saffron robes. But, they met in the Map Room rather than in the White House’s private quarters or the Oval Office, venues that are intimately familiar to watchers of The West Wing as the places where the deepest embraces take place. Similarly, there was no joint post-meeting press conference.

The writer must pause here to declare his interest, as we say in South Africa. In a place of honour in the writer’s home there is a silk scarf he received directly from the Dalai Lama nearly twenty years ago when he (the Dalai Lama, not this writer) was in Washington to meet a previous president. In fact, a meeting with a president is not a rare, one-time thing. The Dalai Lama has been meeting US presidents since the time of George HW Bush.

However, this time around the meeting comes right in the middle of a whole range of tensions and difficulties between the US and China – and as China increasingly reaches for its place in the sun as the globe’s major rising world power. Rather than any specific anticipated outcome from the meeting itself, the key issue will be how China responds to the meeting. It could be one of the most important decisions any government undertakes this year. If China decides that the very fact of the meeting crossed some intangible frontier, it may become an increasingly difficult year for American-Chinese relations. If, instead, the Chinese choose to interpret the meeting as simply a little more sand in the gears of the Chimerican machinery, the outcome will be very different.

While the Dalai Lama is revered by many around the world, the Chinese government views the exiled religious leader – who has been living in Dharamsala, India for over half a century – as a dangerous separatist whose ultimate goal is the overthrow Chinese rule of Tibet, even though he routinely denies that this is his religious or political agenda. As a result, the Chinese have argued that any official foreign leader’s contact with the Buddhist monk becomes an automatic infringement of Chinese sovereignty over Tibet.

Inevitably, Tibet’s political circumstances would, from the Chinese perspective, speak to the status of the predominately Muslim region of Sinkiang, north of Tibet, or the even more difficult question of the final status of Taiwan, the island that became the home of the defeated Nationalist government led by Chiang Kai Shek in 1949. This, in turn, is tied up with US economic and defence support of the Taiwan regime – most recently with the announcement of a $6.4 billion military-equipment sales package for Taiwan – something that has further inflamed China-US ties.

China is a rising global rival for the US in terms of trade and influence, as well as a hoped-for partner on such issues as Iran and North Korea’s nuclear ambitions, leading American presidents – including, most recently, Barack Obama – to tread carefully. Besides all of these issues, China is one of America’s most important trade partners (with a growing array of trade disputes, ranging from deboned chicken meat exports to restrictions on the internet giant Google and US concerns about the exchange rate for the Chinese currency) and China now holds a growing pile of US government debt. Not an easy one, this.

As a result, when the Tibetan monk arrived at the White House, there was a minimum of fanfare. In a departure from the more typical rugby-like scrum by media photographers, the White House released just one official picture rather than permitting independent photographers and reporters to capture the meeting in the usual “photo spray”.  True to form, the Dalai Lama himself met the media outside the White House, saying he was “very happy” with the meeting and throwing a snowball at reporters. Later in the day, he rubbed it in just a bit, calling China “childish” for its “limited” approach to the Tibetan desire for greater rights, adding that he anticipated negative Chinese reactions to the meeting. “Childish” should help with that.

As for Obama’s views, according to White House press secretary Robert Gibbs, “The president stated his strong support for the preservation of Tibet’s unique religious, cultural and linguistic identity and the protection of human rights for Tibetans in the People’s Republic of China.” Accordingly, the Obama administration was trying to thread its way through his oft-expressed support for human rights internationally without further inflaming bilateral relations and in a way that would not endanger the planned visit of Chinese leader Hu Jintao to the US, or put a further damper on high-level exchanges between defence leaders from the two nations than have already occurred from the military sales to Taiwan, or further inflame trade disputes. Simultaneously, Obama was attempting to meet the Dalai Lama and recognise China’s concerns without appearing to be too concerned about China’s priorities or feelings, similar to the way some critics and analysts say that the president gave much to China and got little back.

The Dalai Lama’s foreign affairs advisor, Lodi Gyari, said Tibetans could draw real encouragement from the session and Michael Green, a White House East Asia specialist in Republican administrations said that just the “fact that they spend time together in an intimate setting means everything for the Tibetan cause”. The Tibetan leader himself told reporters on the White House driveway after the meeting that he had spoken with the president about the promotion of human values, religious harmony, a greater leadership role for women around the world and the concerns of the Tibetan people – and that Obama was “very much supportive”. Well, he would say that too, wouldn’t he?

And now the spin will begin in earnest. Among others, major spinmeisters will include the Chinese government; the Obama administration; the Friends of Tibet and that movement’s international friends and supporters; the Dalai Lama’s own exile headquarters; and the vast network of US organisations supporting better trade and political ties with China. Most immediately for the president’s own political circumstances, a growing legion of his right wing critics, eager to find yet one more irrefutable proof of Obama’s weakness, will be in Washington this very weekend at the annual Conservative Political Action Convention meeting where Obama’s sins will be roundly identified and scourged. Watch out for potentially lethal flying buns.

Photo: The Tibetan spiritual leader the Dalai Lama talks to the media after his meeting with U.S. President Barack Obama at the White House in Washington February 18, 2010. REUTERS/Yuri Gripas

Watch: Dalai Lama talks to reporters after the meeting with President Obama