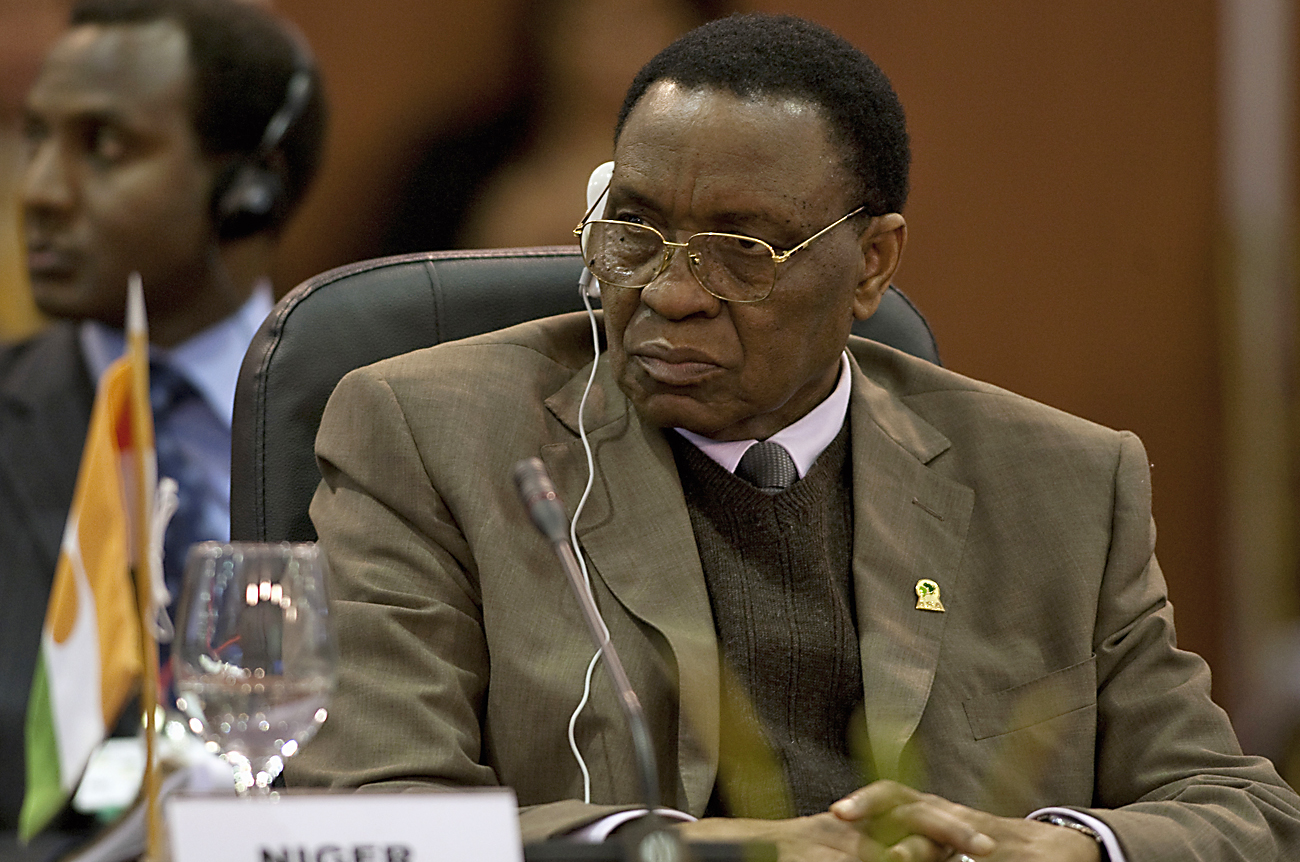 Niger President Mamadou Tandja has been ousted after a protracted gun battle around the presidential palace in the capital, Niamey. Tandja changed the constitution in August to allow him to stand for a third five-year term, a likely reason for the insurrection. Coup leaders announced on television that the West African country’s constitution has been suspended and all state institutions dissolved. Instead, the new junta said the nation will be led by a Supreme Council for the Restoration of Democracy. Tandja is thought to be being held at a military barracks near the city, along with other government ministers. The coup leaders said on television they want to make Niger an example of democracy and good governance. They’ve closed the country’s borders and imposed a curfew, so democracy will take a while.

ICC says those guilty of Guinea’s September massacre will pay

International Criminal Court prosecutors say there’ll be no immunity for those who took part in the killing of 150 civilians during protests in Guinea last year, after a coup by the country’s military in December 2008 . The murders took place as some 50,000 demonstrators marched in the capital, Conakry, decrying coup leader Captain Moussa Dadis Camara’s decision to run in 2010 presidential elections. Camara was later shot in the head by an aide, during a December 2009 assassination attempt, and is now recovering in neighbouring Burkina Faso. Guinea’s interim leader General Sékouba Konaté, has now set the country on the road to civilian rule. Senior members of the military junta are implicated in the massacre, and a UN report says Camara, who was the junta chief at the time, bears direct criminal responsibility. The ICC has no powers of arrest in Guinea and will have to rely on local authorities for that. The prospect of trials could make certain elements of Guinea’s military difficult to handle and will be a tough task for the nation’s fragile civil authorities.

The UN wants peacekeepers to stay in Chad, despite a government demand that they leave. The UN Security Council sent in forces last year on a monitoring mission near Chad’s border with Sudan’s restive Darfur province, where some 300,000 people have been killed over seven years. But Chad’s President Idriss Deby, who has just concluded an unprecedented visit to Sudan, says the UN force has not fully deployed and is unable to protect civilians and refugees. Now, Chad’s UN ambassador Ahmad Allam-mi, says ties between his country and Sudan are getting better. The mandate for the UN’s 5,500 peacekeepers lapses in mid-March. The UN took over from an EU force in March last year, but with peace breaking out, the Chadians want to go it alone.

The Libyans have managed to set 25 European nations against each other, after imposing visa restrictions on Schengen zone nationals. Many believe this was caused by Libya’s arrest and jailing of two Swiss businessmen, one of whom has now been freed. Schengen allows nationals of signatory states to pass freely through borders, but not all EU states, including Britain, are full members. Now, Switzerland’s foreign minister Micheline Calmy-Rey has denied Italian accusations that her country broke Schengen zone rules by imposing visa restrictions on Libyan officials, including Libyan leader Muammar Gaddafi and his family. Calmy-Rey says it was Tripoli that turned the dispute into a Europe-wide problem. The Swiss businessmen are widely believed to have been arrested because the Swiss briefly arrested one of Gaddafi’s sons in Geneva in 2008, after he was accused of abusing a domestic worker. British nationals have been exempted from such restrictions, probably because the UK has recently released the only man convicted in the 1988 Lockerbie plane bombing over Scotland that killed 270 people. Since then, British companies have signed multibillion-dollar oil contracts with the Libyans. The Italians have also increased investment in Libya, so voila, there you have it.

Madagascar’s coup leader promises free and fair elections, on his own terms

Madagascan President Andry Rajoelina has changed the country’s parliamentary elections from March to May, saying the vote on the Indian Ocean island will be transparent and democratic. But few will believe him after he unilaterally appointed a military-backed prime minister recently, having taken power in a March coup last year. Since then the former DJ and entrepreneur has rebutted numerous attempts by international mediators to reach agreement with the main opposition parties, meaning he’s risking sanctions and the possible cancellation of foreign aid. The African Union promptly suspended Madagascar post-coup, and Rajoelina is now completely diplomatically isolated. So, he may be at last feeling the need to give the polls some sort of credibility and legitimacy, in voice at least.

A Ugandan priest has shown gay pornography to his congregation to gain support for a proposed law which would see some gay people facing the death penalty. Rights groups say Pastor Martin Ssempa wanted to equate homosexuality with paedophilia. The private member’s bill before parliament has been condemned across the world, with US President Barack Obama calling it “odious”. The bill seeks the death penalty for gay sex with minors, HIV/Aids-affected people and serial offences. Ugandan President Yoweri Museveni has stepped back from endorsing the bill, after investors and aid donors made clear their abhorrence of it. He had earlier warned youths in Kampala that European homosexuals were recruiting in Africa, saying gay relationships were against God’s will.

Scientists have compared the genes of Archbishop Desmond Tutu with those of the San, the first people to inhabit southern Africa, to study genetic diversity and health. In all, tests on the genomes of five southern Africans found Tutu to be related to the San through his mother, via his Tswana and Nguni ancestry. Researchers hope the study will help better represent southern Africans in drug trials based on genetic studies of disease. All the participants, including four San, were about 80 years old, with long health records.

Oxford University scientists have discovered a means of keeping vaccines stable without refrigeration, saying this could help immunise more children in rural Africa. They mixed the vaccines with two types of sugar before drying them on filter paper, after which they were easily reactivated when needed for injection. A lack of cold storage in developing countries can now be overcome, after the researchers said they managed to keep vaccines stable for up to six months at a very hot 45degC. Vaccines normally deteriorate without fridges, but the use of sucrose and another sugar called trehalose, have provided a cheap and simple alternative to refrigeration. Microsoft’s Bill and Melinda Gates funded the research through their foundation. They’ve also been at the forefront of combating malaria in Africa and opening windows to new scientific wonders.