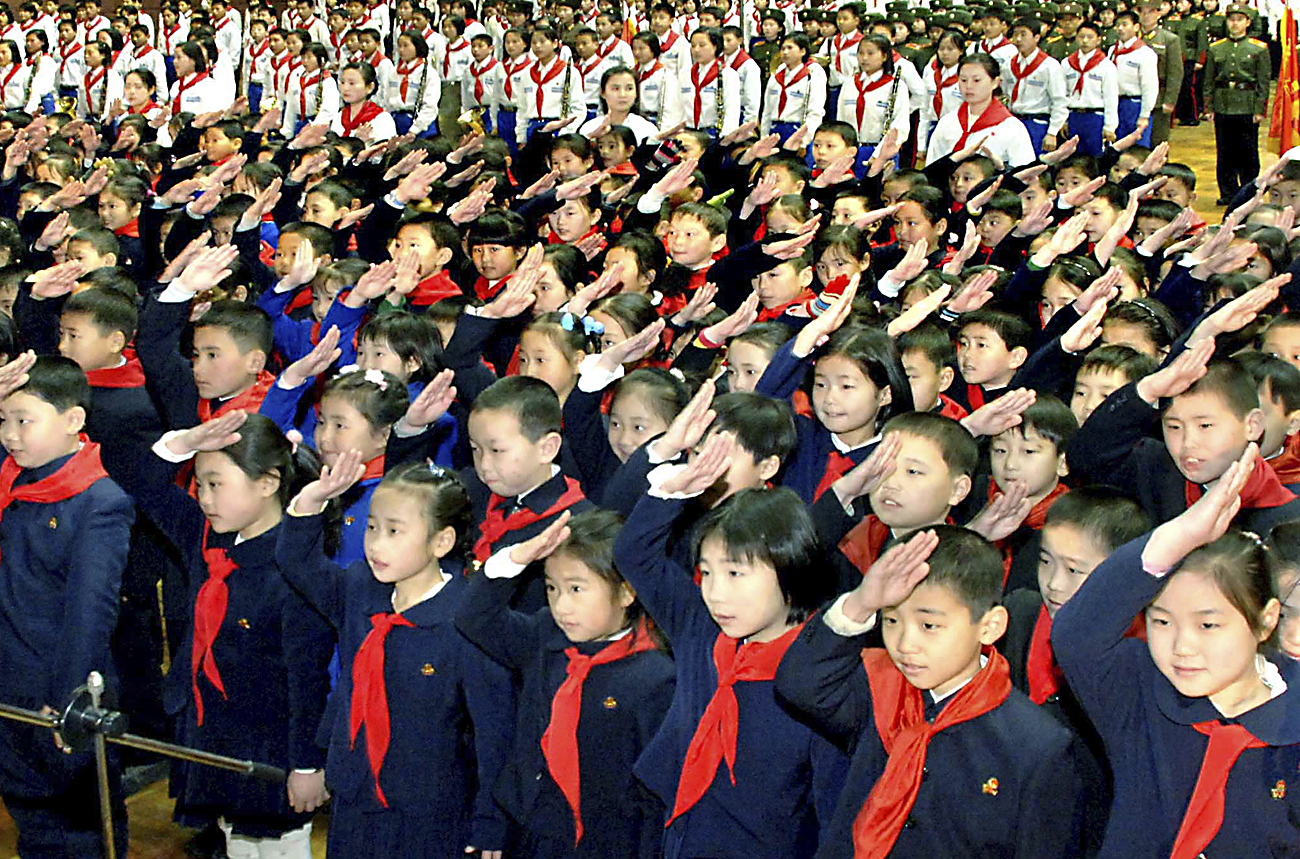 North Korean leader Kim Jong-il is said to be depressed and chronically ill, but that didn’t stop the impoverished, but nuclear-armed country from celebrating his 68th birthday in style. Reports say he uses rhino horn and bear gall bladders to prop up his ailing health, spending more than $610,000 on one shopping trip to Beijing. That won’t help anti-poaching efforts in Africa and elsewhere. As is usual on such occasions, the weirdo-Stalinist North Koreans perform elaborate cultural ceremonies and militaristic marches through the capital Pyongyang, while distributing masses of propaganda material showing how the gaunt and pale Kim is still active and cheerful, as he single-handedly guides the building of the nation. US and South Korean officials believe a stroke in late 2008 has kept the “Dear Leader” out of the public eye, fuelling a power struggle in a country that’s suffered huge famine. So little is known about the secretive North that there’re no photos of Kim’s youngest son, seen to be a potential successor in the family dynasty, and experts in South Korea aren’t even sure how to spell his name.

In a joint push, CIA and Pakistani agents nabbed the Taliban’s No. 2 military commander in Pakistan’s major commercial hub of Karachi. The southern port city’s a long way from the Afghan front, so intelligence operatives will be interested to know what he was doing there. Mullah Abdul Ghani Baradar was arrested 10 days ago, and is the most important Afghan Taliban leader to be caught since the war began in 2001. The success comes as Nato allies are attacking the Taliban’s biggest stronghold in the Afghanistan opium-town of Marjah, and follows months of unmanned drone missile strikes on the border between the two countries, which are said to have killed numerous mid-level Taliban commanders.

Russia has joined the US and France in telling Iran to stop enriching uranium to higher levels. That’s boosted the chances of giving sanctions against Tehran real teeth, as Russia, along with China, has been limp in its response to Iranian aggression so far. A recent statement by Iran that it will enrich uranium from about 3% purity to some 20% for use in a medical reactor, has enhanced suspicions that it really seeks to make nuclear weapons. By joining big Western powers, Russia has sent a vital message of unity to Iranian President Mahmoud Ahmadinejad, although he’s likely to continue to engage in political brinkmanship. Iran has ignored UN Security Council sanctions in relation to its nuclear programme, but if the Chinese now get serious, Ahmadinejad may have to jump.

US President Barack Obama has announced $8 billion in federal loan guarantees for the construction of the first US nuclear power plant in nearly 30 years. The partial meltdown of the core reactor at Three Mile Island in the late ‘70s cast a pall over this type of power generation, but climate change and fears that the world has already entered the stage of “peak oil” has the Americans scrabbling for alternative energy sources. Obama has called for energy legislation that penalises carbon pollution from fossil fuels. Nuclear energy is vastly expensive to set up, but much cleaner and somewhat cheaper once it gets going. France gets 75% of its energy from nuclear power, exporting much of this. And China’s increasing leadership in wind and solar energy production has upped the ante in the race for greener, and ultimately cheaper and more efficient fuels. A return to nuclear energy is one step in the equation.

The EU has told Greece to fess up on how the government used complex Wall Street financial instruments to hide its debt of some $270 billion, saying it might widen the enquiry, much as the Americans have hauled up bankers in front of wide-ranging hearings on Capitol Hill. Eurozone finance ministers have given Greece one month to prove it can cut its annual budget deficit in 2010 to 8.7% of gross domestic product, down from 12.7 % last year. (That’s still miles above the EU limit of a 3% deficit.) The debt has badly rattled confidence in the European single currency, and mass protests by Greek civil servants over tough austerity measures has done nothing to improve this situation, especially after a bomb exploded at JPMorgan Chase’s offices in Athens. But European leaders haven’t specified what action they’ll take to defend the euro against possible Greek economic collapse, other than to say they’ll do something.

Toyota’s in deep trouble with the US Transportation Department over its massive recall of vehicles in the American market. Authorities are demanding documentation from the Japanese company to find out when and how the company learned of safety defects in millions of vehicles. The world’s largest car maker is accused of tardy response times in a crisis caused by faulty gas pedals and sticky floor-mats. Now, US authorities say it must respond within 60 days to their latest demands, or face fines. Meanwhile, the beleaguered manufacturer says it’ll temporarily halt production at its Texas and Kentucky plants, over fears that it could build up huge stockpiles of unsold vehicles. When the crisis first broke, the vehicle maker suspended production of eight US models for a week, so the latest closures indicate just how badly Toyota’s been hit by questions over its reputation for safety and quality.